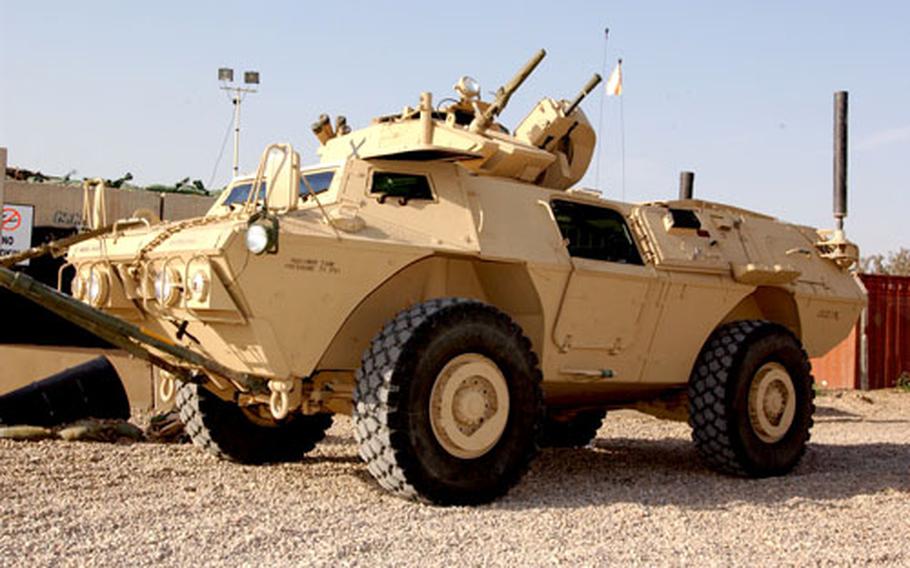 The Army has been using Armored Security Vehicles in Iraq for several months and hopes to get more on the roads soon. (Jeff Schogol / S&S)

The Army has been using Armored Security Vehicles in Iraq for several months and hopes to get more on the roads soon. (Jeff Schogol / S&S) 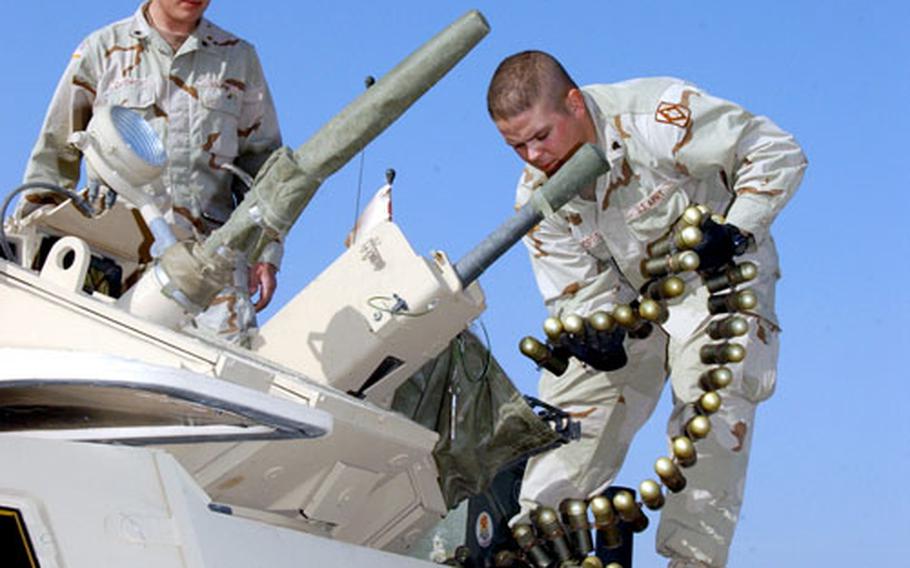 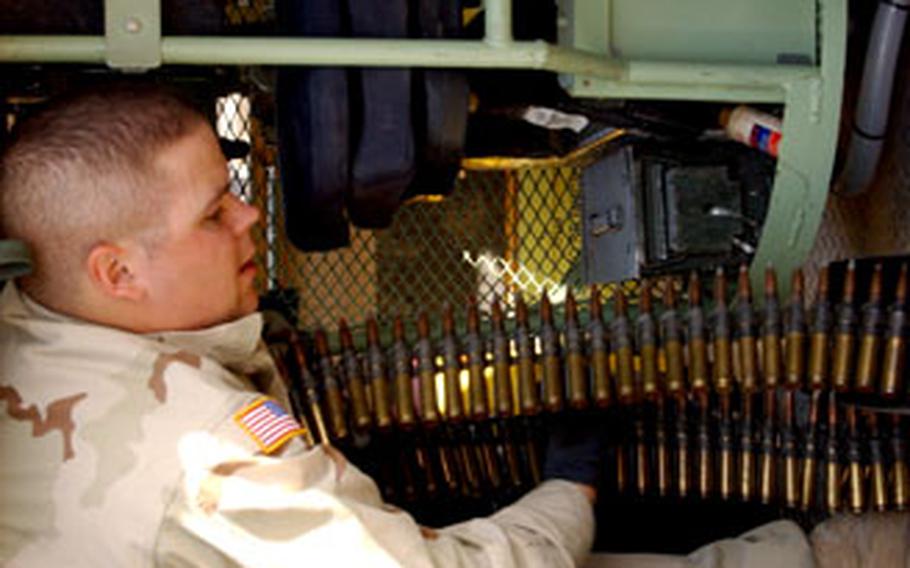 Spc. David Norris, 24, of Hood River, Ore., prepares to load the .50-caliber machine in the turret of his Armored Security Vehicle. Norris said he feels safer in the ASV than in a Humvee. (Jeff Schogol / S&S)

CAMP ANACONDA, Iraq &#8212; Spc. David Norris swivels like a ball-turret gunner in an old bomber as he moves the internal turret of his Armored Security Vehicle to check for prowling insurgents on a main Iraqi road.

With a turret that allows gunners to fire while inside the vehicle, three layers of armor and an imposing look, the ASVs also have a distinct psychological effect on those inside and out of the vehicles, soldiers said.

The ASV is part of the evolving war-scape of Iraqi roads, which has proven to be a tough battleground for Humvees.

Norris, 24, has been a gunner in both a Humvee and an ASV.

Being able to fire while inside the vehicle means he doesn&#8217;t have to worry about being exposed to snipers and shrapnel, he said. And ASVs have more firepower than Humvees, armed with both a .50-caliber machine gun and an MK 19 grenade launcher, Norris said.

First Lt. Layne Matthews, 29, said the ASV&#8217;s appearance gets the message across to insurgents.

ASVs are shaped like a boat on wheels in order to make sure that anything that hits them is deflected away from the vehicle, said Spc. Eric Davenport, 29.

As of now, there are only a couple hundred ASVs in the theater, said Spc. Brandon Price, 24, of Battery B, 5th Battalion, 113th Field Artillery. Price, who showed off the ASV last week, said one reason there are relatively few ASVs in Iraq is that each component in them has to be built by hand and the company that makes them is in Louisiana, meaning production was affected by Hurricane Katrina.

But the military ultimately plans to field several thousand of the vehicles in Iraq, officials said.

While soldiers praised the ASV&#8217;s increased protection and speed, some say the vehicle still has some drawbacks.

For example, it is so cramped inside that some crews leave certain gear behind, they said. Also, with few windows, the ASVs have far less visibility than Humvees, and sometimes gunners won&#8217;t hear enemy fire, they said.

That is why it is important to have ASVs work in conjunction with other vehicles, such as normal Humvees, in order to provide full protection, soldiers said. Still, ASVs have distinct advantages over Humvees.

Price said that when he was in a Humvee, the 6-foot-4 gunner on his crew would stand exposed to Iraqi insurgents.

Although there are relatively few in Iraq, the ASV has proven to be a new type of road warrior that can take punishment from insurgents who would take out Humvees. Only three ASVs have been knocked out of commission by roadside bombs or rocket-propelled grenades, and all three were back on the road within a week, Price said.

&#8220;We created a big steel box in theater right now that weighs more than the Humvee suspension and chassis can take, so we are wearing vehicles out,&#8221; he said.

In the next five years, the Marines hope to begin fielding a combat tactical vehicle to replace the Humvee, McConnell said. The new vehicle will be designed to protect troops inside from explosions underneath, he said.

&#8220;There are fewer vehicles on the road today that are as old as the Humvee, so its basic automotive designs are out of date and certainly it was never designed to be as heavily armored as they are today. In order to get to that heavily armored capability, we have to look at a new design,&#8221; he said.

In the meantime, the Army is working to give Humvee gunners more protection by fielding a system that allows gunners to fire their weapons from inside their vehicles, said Sgt. 1st Class Larry Rigsby, 37, an instructor with U.S. Army TACOM Life Cycle Management&#8211;Rock Island, Ill.

Known as the Common Remotely Operated Weapon Station, the system allows gunners to fire the weapons via a joystick and camera with &#8220;one-shot, one-kill&#8221; accuracy, Rigsby said.

So far, only a few hundred have been fielded, but monthly production is expected to double beginning in May, Rigsby said.