More Marines sent to US Embassy in Baghdad as precaution 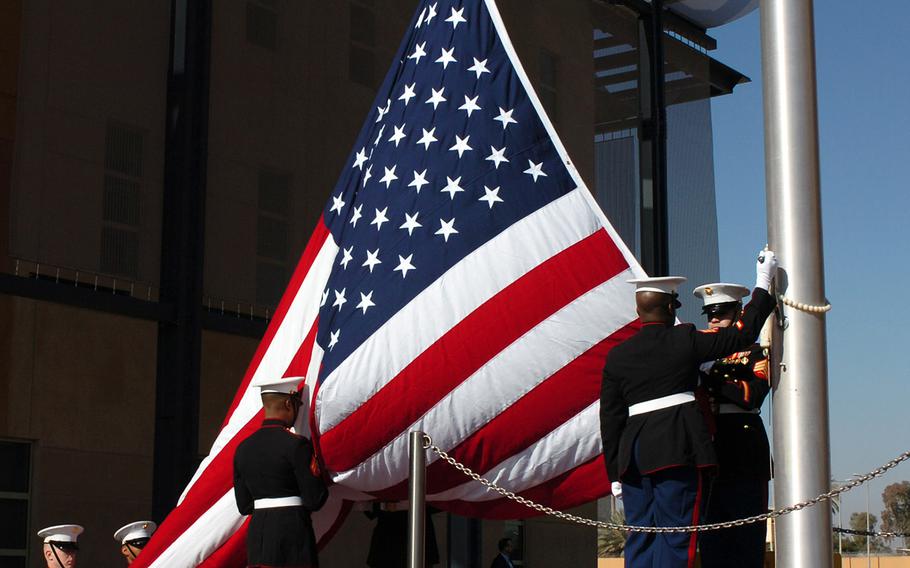 In a 2009 file photo, Marines of the Marine Security Detachment of the U.S. Embassy Baghdad, Iraq raise the flag at the new Embassy's dedication ceremony. (U.S. Army)

WASHINGTON – Another 25 Marines were dispatched to the American Embassy inside Baghdad’s Green Zone on Friday as a precaution following recent protests in the city, a U.S. official said.

The State Department requested the additional Marines to bolster the defense of the embassy following recent protests in Baghdad, said the official, who spoke on the condition of anonymity because he was not authorized to discuss the issue.

Protestors loyal to Shiite cleric Muqtada al-Sadr stormed the Green Zone last weekend, breaching the fortified area that includes Iraqi government building and the U.S. Embassy. It was the first such breach of the zone since it was established shortly after U.S. forces took control of Baghdad in 2003.

Navy Capt. Jeff Davis, a Pentagon spokesman, said Friday that the U.S. Embassy was never threatened by the protestors, who have demanded Iraq’s political system be overhauled.

“The situation today is much more subdued than it was a week ago,” David said Friday. “The Green Zone has been secured and reinforced, and there are not protesters inside the Green Zone, as there were before.”

The group bolsters a unit of Marines permanently assigned to guard the embassy. Kirby said the United States would not discuss how large that unit is. He said its force size is routinely assessed and adjusted.

Supporters of al-Sadr, whose forces fought American troops in Iraq, have been protesting the Iraqi government for several months. Davis said the United States remains committed to supporting Iraqi Prime Minister Haider al-Abadi, who America has worked closely with in its ongoing fight against Islamic State group militants.