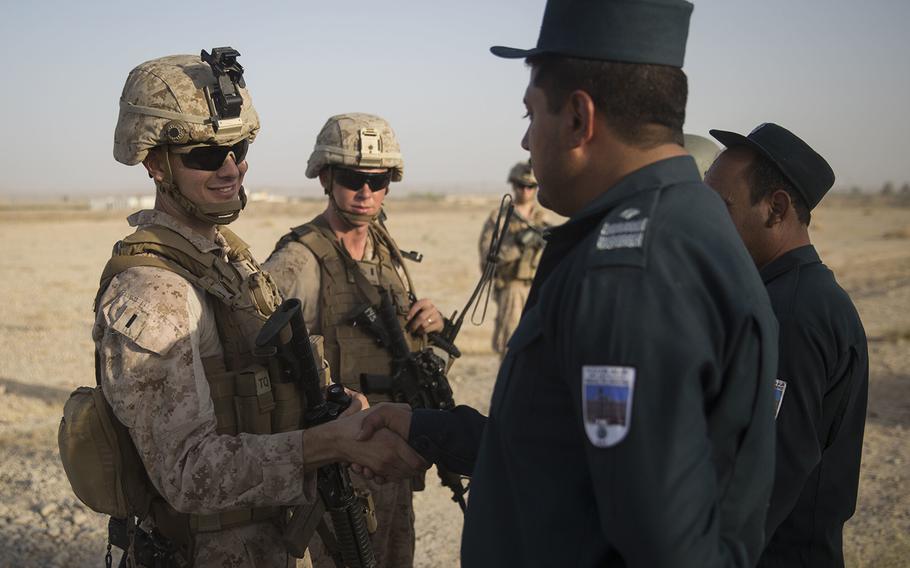 A U.S. Marine advisor with Task Force Southwest thanks an Afghan National Policemen for showing them around and introducing them to the ANP security guards at Bost Airfield, Afghanistan, July 31, 2017. (Justin T. Updegraff/U.S. Marine Corps)

The Marines will join Task Force Southwest, a unit of about 300 Marines already serving in Helmand, as part of a routine tactical adjustment of forces to bolster ongoing training and advising operations in the southern province, said Bob Purtiman, a Kabul-based spokesman for the NATO-led Resolute Support mission to train and advise Afghan security forces.

“Periodically, forces are reallocated to the Resolute Support mission to provide greater operational flexibility to the commander,” he said. “The Marines are being reallocated to Afghanistan as part of a routine intra-theater movement of forces.”

The initial Task Force Southwest of 300 Marines were deployed to Helmand in April charged with boosting the train, advise and assist mission for Afghanistan’s long-struggling security forces in the province. They replaced an Army unit because of the Marines’ history in the province, where as many as 20,000 Marines operated before the United States declared its combat mission completed in 2014.

The additional forces are not tied to the ongoing strategy reviews of the war in Afghanistan or security throughout southwest Asia being conducted by the Pentagon and the White House, Jacques said.

Those plans are expected to call for an addition of nearly 5,000 American troops to the about 8,400 now serving in Afghanistan. But the plan is still being debated by top officials in President Donald Trump’s administration, defense officials said. The officials, who spoke on condition of anonymity to discuss the private talks, said it was unclear when the new strategies would be unveiled.

Senior U.S. officials, including Army Gen. John Nicholson, the top commander in Afghanistan, have characterized the war in Afghanistan as a stalemate with the Taliban.

The insurgent group controls or contests about 40 percent of Afghanistan’s population districts and controls land containing about 3 million people, roughly 10 percent of the country’s population, according to a Special Inspector General for Afghanistan Reconstruction, or SIGAR, report in July.

Helmand province remains among the most challenging for the Afghan government to control. The SIGAR report said nine of 14 districts in Helmand are controlled by the Taliban.

A U.S. soldier, Pfc. Hansen B. Kirkpatrick, was killed in action in Helmand in July while advising Afghan security forces during an operation in Nawa District.