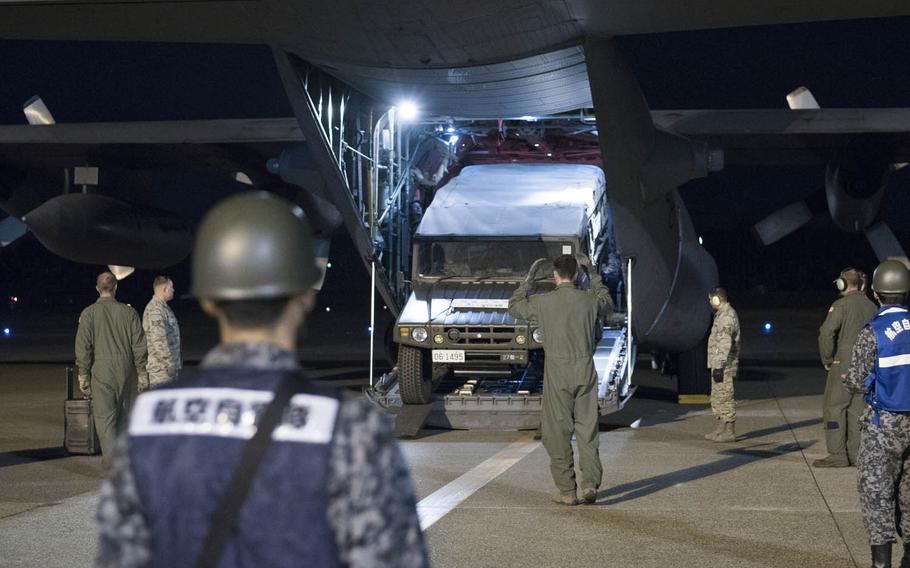 YOKOTA AIR BASE, Japan — The U.S. military is training to move Japan Ground Self-Defense Force vehicles by air and sea as the allies come to grips with new Japanese defense guidelines allowing for more cooperation in an emergency.

The air and sea freight operations follow changes to rules governing the Japan Self-Defense Force that were approved by Japanese Prime Minister Shinzo Abe’s cabinet last year. The changes give the Japanese military more freedom to act in support of U.S. forces in an emergency and remove geographical limits on their areas of operation.

“The new defense guidelines, agreed to in 2015, as well as the security legislation recently enacted by the Japanese Diet, are enabling new, expanded forms of cooperation with Japan,” U.S. Forces Japan spokesman Maj. John Severns said in an email.

Personnel from the Air Transportability Test Loading Activity, out of Wright-Patterson Air Force Base, Ohio, came to Japan in January to certify that Japanese military vehicles could be safely transported on U.S. aircraft, he said.

The U.S. team measured and weighed the vehicles to ensure they would fit inside U.S. planes and checked tie-downs that restrain cargo in flight, said Brian Herriott, an engineer involved in the certification.

In April, airmen from the 374th Airlift Wing transported 16 Japanese military vehicles and over a dozen personnel from Hokkaido to Kumamoto, providing forces on the ground with essential equipment to carry out earthquake relief operations, Severns said.

“The certification process and our practice transporting JGSDF assets in U.S. Air Force aircraft, both in training environments and in response to real-world events like the Kumamoto earthquake, is a tangible example of the enhanced cooperation that will characterize this alliance in the future,” he said.

The landing craft — designed to load and unload equipment from docks or by dropping a ramp onto a beachhead — are part of pre-positioned U.S. military stocks at Yokohama, she said.

Half a dozen U.S. troops and 25 Japanese soldiers participated in the July 27-31 sea operation, she said.

“This was the first time we have moved Japanese vehicles from one port to another,” she said.

The Army will use the landing craft next month to move more Japanese military vehicles to Yokohama. From there, they will be loaded onto civilian freighters and transported to Washington State as part of an initiative dubbed Reverse Pathways that will see Japanese soldiers from the 8th Division work alongside U.S. troops at the Yakima Training Center, Hearne said.

Reverse Pathways mirrors the Army’s Pacific Pathways program that deploys U.S.-based units to partner with friends and allies all over the region.

Late in the year, the Army landing craft will move gear belonging to Japan’s Northern Army to Yokohama from Hokkaido, Western Army equipment from Sasebo to Okinawa and other items from Okinawa to Yonaguni, Japan’s southernmost island, Hearne said.

Japan’s new defense guidelines are driving this sort of training, she said.

“There’s an increasing push to build interoperability with U.S. Army watercraft moving JGSDF vehicles. As they (the Japanese) expand their roles, then we expand our roles,” she said.