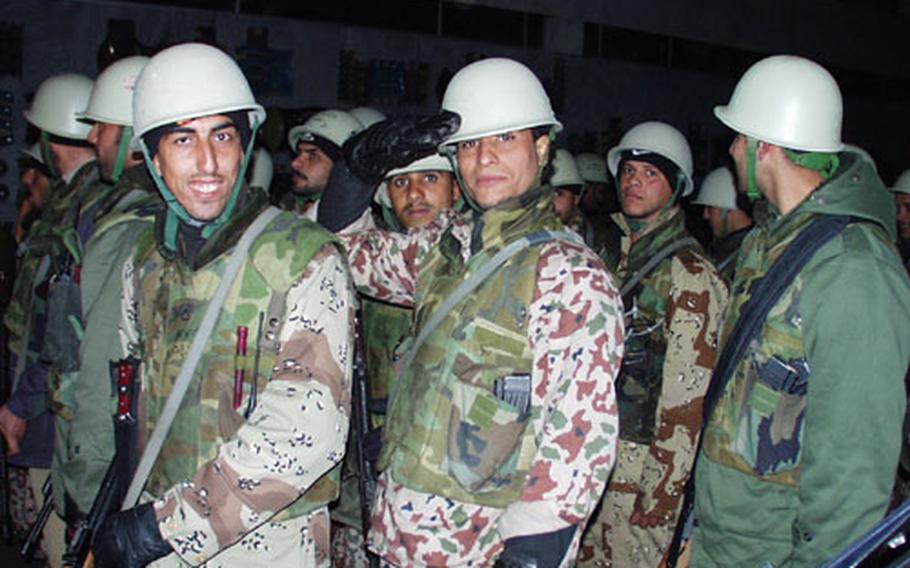 A member of the Iraqi Civil Defense Corps salutes before an evening raid. (Ward Sanderson / S&S)

A member of the Iraqi Civil Defense Corps salutes before an evening raid. (Ward Sanderson / S&S) 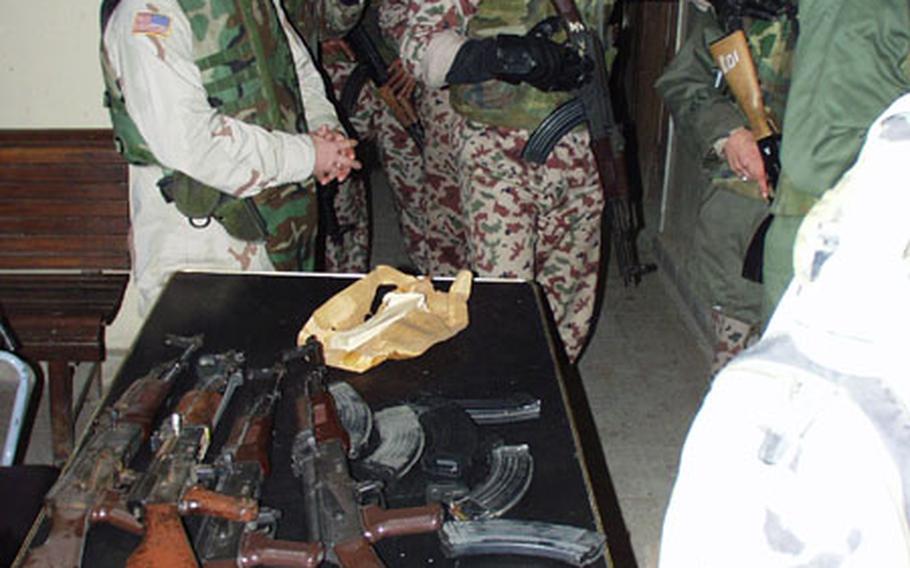 Members of the Iraqi Civil Defense Corps and U.S. soldiers pile up automatic rifles found during a raid Monday evening. The weapons were returned to their owners. (Ward Sanderson / S&S) 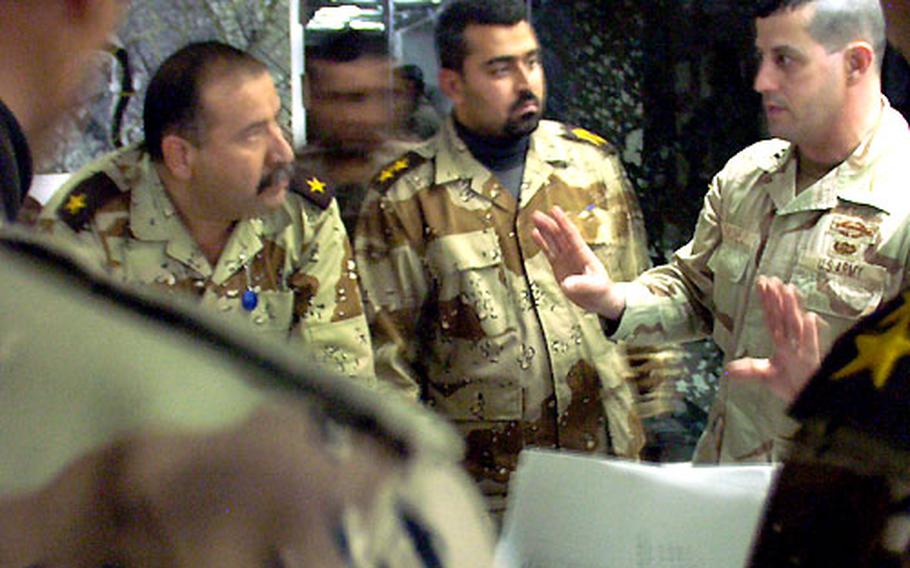 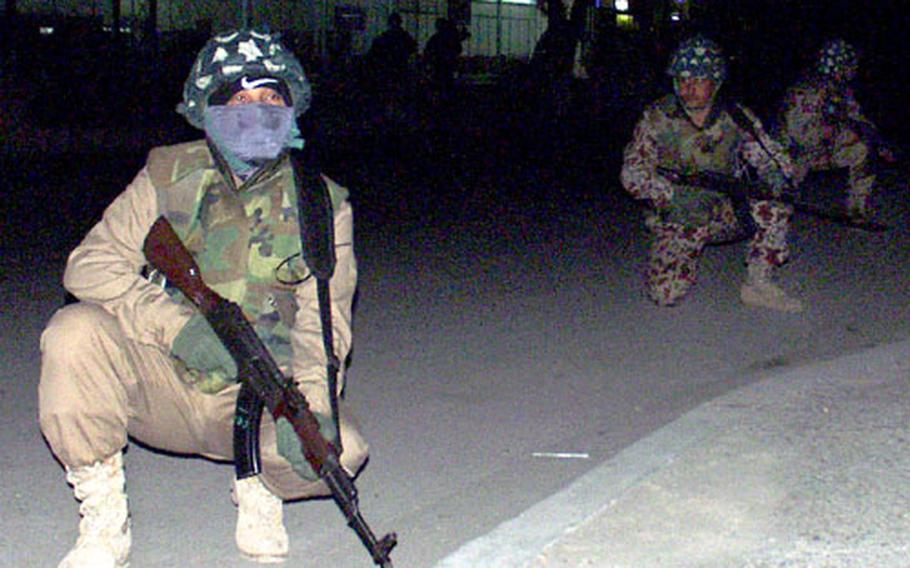 Members of the Iraqi Civil Defense Corps crouch during a raid on Monday. (Ward Sanderson / S&S) 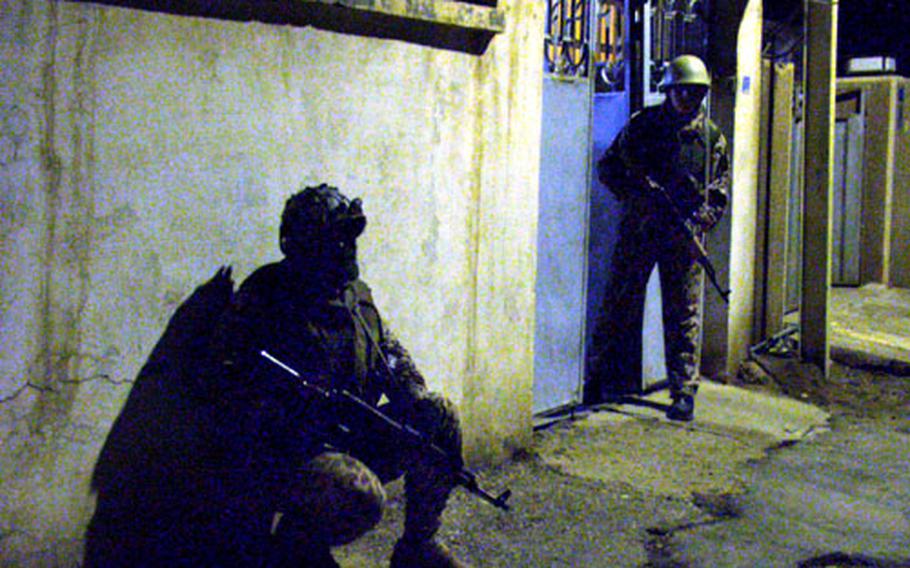 Iraqi defense corps troops wait before entering a home during a hunt for a terror suspect. (Ward Sanderson / S&S)

BAGHDAD, Iraq &#8212; In a move that U.S. commanders hope will push more day-to-day peacekeeping responsibilities over to Iraqis themselves, the Army is organizing raids to hunt down terrorists using overwhelming numbers of local paramilitary troops.

On Monday, about 35 members of the Florida National Guard provided security and intelligence for an operation into Baghdad conducted by about 80 members of the Iraqi Civil Defense Corps.

American troops hope such operations will be steps toward a nominally normal Iraq. The occupying coalition has spent $3.3 billion in tax dollars to establish the defense corps as well as an army, border patrol and other institutions.

&#8220;This is a complete role reversal,&#8221; said Capt. Rodney Sanchez, commander of Company A, 3rd Battalion, 124th Infantry of the Florida National Guard. Typically, the number of Iraqis would mirror the number of Americans on such a mission. Ramping up the participation of Iraqis essentially doubled the captain&#8217;s forces.

The area of Baghdad in which the guardsmen operate is relatively tiny, and relatively safe. Sanchez, a Tallahassee policeman in civilian life, stresses walking the streets rather than rolling around sheathed in the beige desert armor of a Humvee.

This hometown approach may be particularly appropriate for the fledgling Iraqi force. It&#8217;s made up of otherwise normal Iraqis who may live alongside the homes and families they search.

That&#8217;s also meant some success. On Christmas Day, locals tipped off soldiers to multiple explosives just outside the compound.

On this Monday evening mission, troops searched for someone believed to support the bloody resistance that has killed scores of soldiers and civilians through the use of improvised explosives, car bombs and grenades. About 30 rigged explosives have been found in Sanchez&#8217;s sector. One of his men, Spc. Robert Allen Wise, died Nov. 12 after someone blew up a mortar shell as his Humvee passed.

These incidents always weigh on the minds of soldiers during raids, no matter how routine. Simmons said there are just too many places on Baghdad&#8217;s trash-strewn streets to hide a bomb.

The captain&#8217;s smaller number of men headed outside. The Iraqis broke into two groups, each platoon taunting the other with catcalls. They cheered. They sang.

Not everyone agrees with Abbas, and this makes his job difficult and dangerous.

Unlike the guardsmen, the Iraqis have no fortress in which to sleep come evening. They simply return to their families. Some cover their faces in scarves or ski masks so that terrorists won&#8217;t know who they are.

Soon the men marched and the black sky shuddered with the sound of helicopter rotors. The Americans kept to the perimeter; the Iraqis massed along the street. Drivers stared. It was not a stealth operation.

Soon it began and the Iraqis used bolt cutters to open a gate. Inside, the Iraqis and U.S. troops found apartment dwellers armed like the Republican Guard. Everyone had an AK-47. This, it turned out, is actually normal.

Sanchez asked one harried man, apparently a building manager, about one of the guns. It&#8217;s for security, the man replied. Each household had only the number of weapons permitted. Sanchez asked the Iraqis to ease up on kicking in doors.

The residents kept their rifles. The helmets left.

The company marched again through streets shiny-slick with puddles and lined with squarish brick and concrete houses. They knocked on one door and a scarved woman answered. A television flickered inside and the troops stepped around a living room strewn with toys.

They then walked out, waved, smiled and kept going.

They banged and clanged against two huge iron gates, turquoise and heavy, but the threshold remained fast. An older man in a greatcoat and tie eventually turned up. He offered to fetch his machine gun and pistol.

The man, the owner of the house, told Gilleon he is a former diplomat. His daughter lives in San Francisco.

The retired diplomat did his best to be diplomatic.

The man joked that his Aladdin fairy tale gates could keep out anything, save a tank. He knew full well the soldiers, of course, could arrange that.

If doors didn&#8217;t open, the soldiers and Iraqi paramilitary troops knocked them in &#8212; or did their best.

If someone seems legitimately out for the evening, the soldiers still bust in, but take before-and-after pictures and leave a note asking for the bill.

At its end, the joint raid netted only the few automatic rifles &#8212; the ones troops returned to their owners &#8212; and an intelligence tip the coalition already had.

But before it was finished, once the street opened wider and brighter, people gawked at the soldiers and paramilitary Iraqis. They waved from shops selling eggs, soft drinks and carpets. A boy soon zipped along the march on his bicycle.

Despite the masks, despite the rifles, no one seemed afraid.