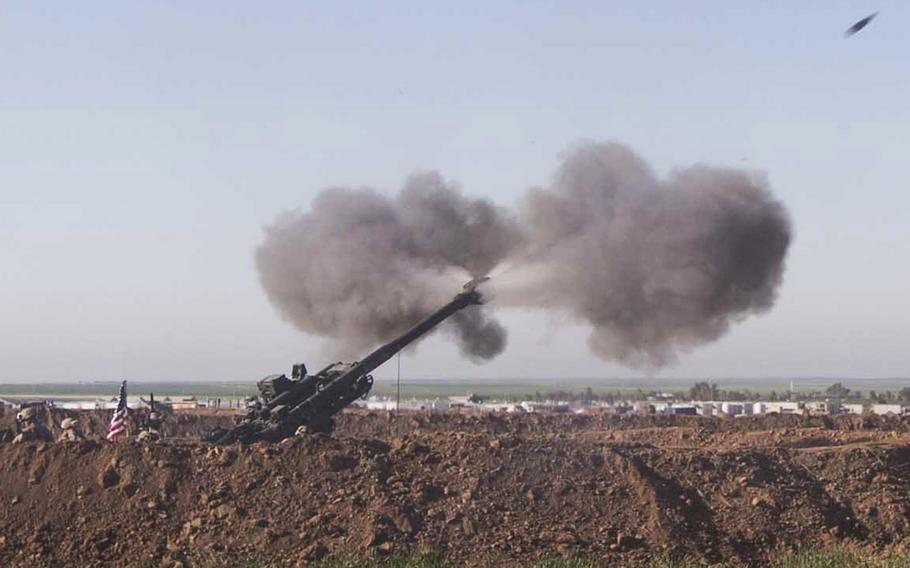 Task Force Spartan, part of the 26th Marine Expeditionary Unit, was inserted into the fight a few weeks ago to provide fire support and protection for Iraqi forces and their U.S. trainers in Makhmour, a city about 75 miles southeast of Mosul. The Marines came under attack by the Islamic State militants almost immediately, resulting in the death of Staff Sgt. Louis F. Cardin and injuring eight other Marines.

Since then, the Marines at the artillery base have provided offensive fire in support of “Operation Valley Wolf,” an attack launched last week by the Iraqi Army’s 15th Division to begin to take villages south of Mosul. The Islamic State group captured Mosul during the summer of 2014 and continues to use the city as its defacto capital in Iraq.

In the new operation, the Iraqi Army is fighting in a series of villages about 30 miles northwest of Makhmour and “will help set the conditions for the liberation of Mosul,” Warren said.

“Those guns have been firing, probably daily,” Warren said.

The unit has also taken a “handful” of incoming rockets fired from Islamic State positions since the last fatal attack. But the rockets have not resulted in any injuries, Warren said.

The Marines have not moved from the base, and no other similar fire bases have been established, he said.

The 26th Marine Expeditionary Unit is scheduled to rotate out of the region soon. But the roughly 200 Marines with Task Force Spartan will remain in Iraq, Warren said.

“Those Marines have been detached from the 26th and attached to us here,” he said. “The MEU will continue on its way.”