More forces, including Assad's, could be hit in defense of US-trained New Syrian Forces 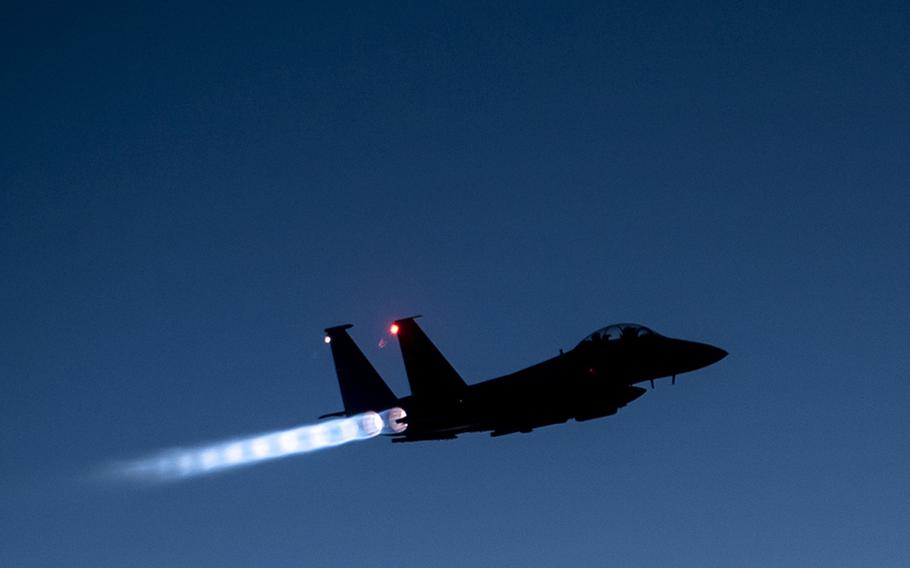 In this Sept. 23, 2014 file photo, a U.S. Air Force F-15E Strike Eagle flies over northern Iraq early in the morning after conducting airstrikes in Syria. (DOD)

WASHINGTON — Friday’s airstrikes to protect U.S.-trained fighters in Syria reflect a change in policy that expands the forces — including those from the Assad regime — that could be hit in the defense of the new Syrian Forces, the Pentagon said Monday.

While offensive U.S. and coalition airstrikes in Syria will be limited to Islamic State targets, the New Syrian Forces “could potentially face a broader range of threats,” said Pentagon spokesman Navy Capt. Jeff Davis. “For defensive purposes, we will help defend them from other sources of threats.”

Davis said the New Syrian Forces have the ability to call in airstrikes, “and that’s what you saw demonstrated on Friday.”

On Friday, New Syrian Forces and Division 30 forces — many of whom are rebel fighters who had been considered for the U.S. train-and-equip program but did not complete the vetting process — were in the same compound when it came under attack by the Nusra Front, an al-Qaida affiliate.

In a statement provided Friday, the Pentagon said “members of the New Syrian Forces along with members of the 30th Division of the Free Syrian Army were attacked by an unknown force of about 50 personnel. The NSF, alongside 30th [Division] fighters, successfully repelled the unprovoked attack.”

Davis would not elaborate on the rules of engagement; for example, if New Syrian Forces identified a group it deemed a potential threat, would defensive fires be justified?

“I am pleased that the Administration has finally decided to provide additional military support to the Syrian forces,” McCain said in a statement, adding that he was “concerned that this is another example of a policy of gradual escalation that has plagued U.S. efforts since the start of the conflict in Syria.”

For weeks, the U.S. has not provided guidance on what type of protection it would give the 54 Syrian moderate rebels it has fully trained and equipped and returned to Syria. The rebels were the first among a much larger program that was supposed to generate more than 5,000 U.S.-trained fighters from four sites outside of Syria and reinsert them into their country to fight the Islamic State. The program has run into multiple challenges, including difficulty of getting potential recruits who can pass security screening. Many of the potential fighters are committed to defeating the regime of Syrian President Bashar Assad, which the U.S. has been careful to say it is not trying to do.

Friday’s action is the first indication that the U.S. may find itself soon in the position of having to fire on Assad’s forces to defend the New Syrian Forces.

“Without addressing a lot of the specifics the moderate opposition forces, there continue to be attacked on multiple fronts. This includes the Assad regime as well as violent extremists like al-Nusra Front” and the Islamic State, Davis said.

“These are people we are working with and training, and we will be providing them defensive support.”