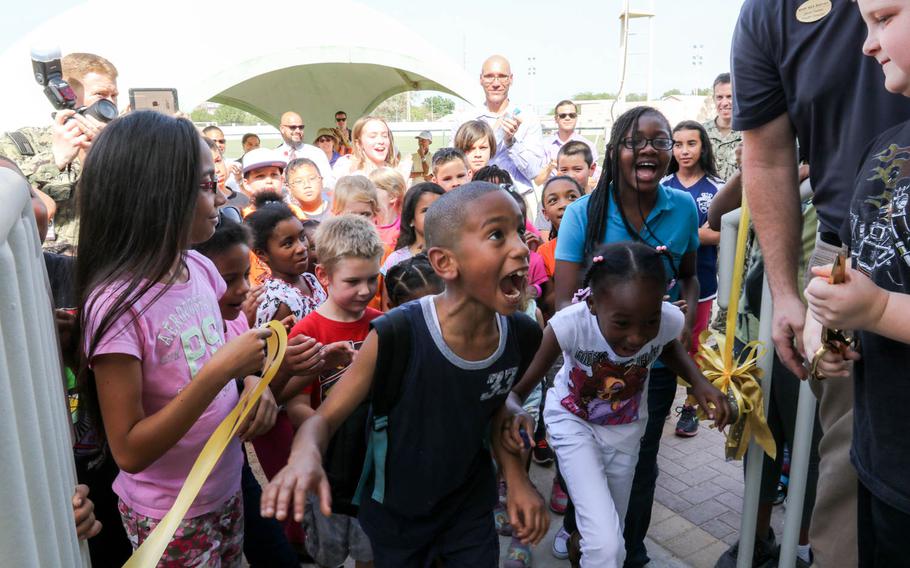 MANAMA, Bahrain — More sailors might soon be able to bring their families on assignment to Bahrain, where the Navy installation hosting 5th Fleet has grown significantly in recent years.

Allowing more sailors to bring their families to the tiny island kingdom in the Persian Gulf would reduce the rate of turnover, as tours could be extended from one to two years for accompanied sailors.

That could be key at a time of stepped-up operations for 5th Fleet, which is heavily involved in the U.S.-led air campaign against the Islamic State group seeking to expand its control of territory in Syria and Iraq.

The number of U.S. personnel in the country has increased from 6,500 to 8,300 in just two years, and the base is nearing its current quota of 686 families, with roughly 1,300 dependents currently in Bahrain. Capt. David Meron, commander of Navy Support Activity Bahrain, has submitted a proposal to raise the quota to 900 families.

“It’s no mystery that the base here is in good shape. We think we have the capacity to hold more dependents,” Meron said in an interview.

The proposal has support, Meron said, but an increase would have to be approved at a very “high level,” and there is no estimate on when the decision might come.

If approved, the new quota would be phased in 50 families at a time to assess the impact on the base infrastructure and on the school run by Department of Defense Dependents Schools.

A $580 million expansion has doubled the U.S. Navy’s footprint here, and what was once an expeditionary location is gradually transitioning into a family-oriented overseas base similar to those in Europe and Japan. Expanding support services for families includes a new $480,000 school-age care facility with the capacity to support 75 kindergarten through sixth grade children that opened last week; a 55 percent increase in capacity over three years at Navy Child & Youth Programs; and plans are in the works to expand the Teen Center and the Child Development Center.

Meron said allowing more dependents in Bahrain is good for a sailor’s “well-being” as well as continuity. “It’s tough because of the constant turnover,” Meron said.

Some personnel say they were hesitant about bringing their families because of the reports about Bahrain’s political unrest.

“Two years ago, we were concerned about coming here; now we’re sad to leave,” said Cmdr. Julie Hunter, whose husband and three daughters accompanied her to Bahrain, which offers a Western lifestyle, including American retail and restaurant chains.

“Turn the TV off and call people that are stationed here,” Hunter said. “You will get a very different perception and perspective of Bahrain from somebody that’s been here.”

Massive protests in 2011 threatened to topple Bahrain’s Sunni monarchy. But these were quickly crushed following an armed intervention by troops from Saudi Arabia and other Gulf monarchies.

At the time, the U.S. Navy temporarily evacuated American families from Bahrain. Since then, the protest movement has lost much of its strength, but sporadic demonstrations by members of the Shiite majority demanding political and economic reforms have continued.

American families soon began returning to Bahrain, which is generally considered safe, with the vast majority of U.S. personnel living off base.

Hunter was excited by the possibility that more American families may soon be allowed to live in Bahrain. “Unnecessary separations are not good. And coming here unaccompanied because you’re forced too, is just another challenge for the spouse and the kids left behind.”

“The word is getting out that Bahrain is not a scary place,” Meron said. “It’s a great place to be.”