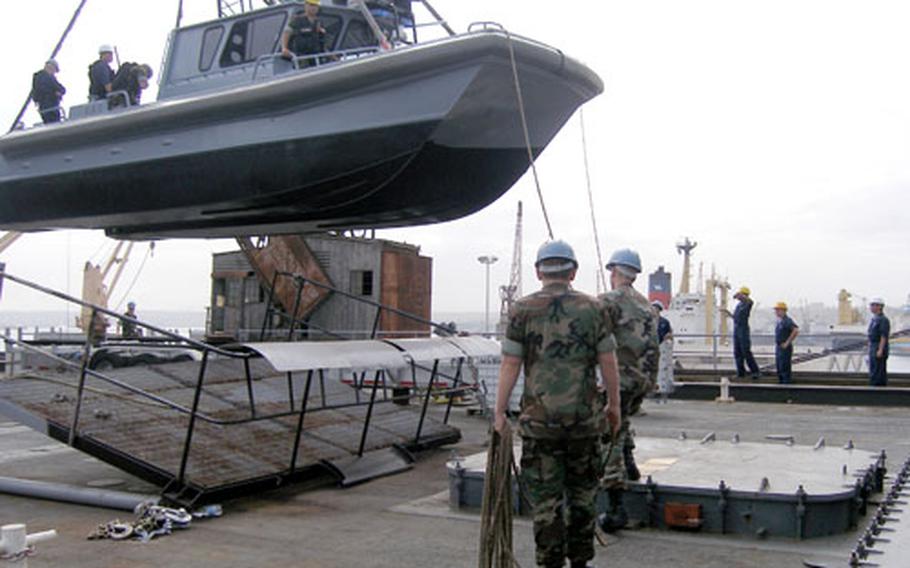 Sailors from Naval Support Activity La Maddalena Security Forces guide their Moose boat onto the crane deck for repairs on board the USS Emory S. Land. The sailors are providing harbor security during the Land’s deployment to the Gulf of Guinea. (Rebekah Blowers/ U.S. Navy)

U.S. sailors who make up the Moose Boat harbor patrol never leave their home port of La Maddalena, or the northern tip of Sardinia.

Currently, the 12-member crew is in the Gulf of Guinea providing additional security for the submarine tender USS Emory S. Land.

&#8220;The ship requested additional security to give an added layer of defense when the Land is in [foreign] ports,&#8221; Petty Officer 1st Class Corey Velasquez, commander of the Moose Boat crew, said in a recent phone interview. The Moose Boat crew is so named because of the vessel&#8217;s manufacturer, Moose Boat, Velasquez said.

The submarine tender deployed from La Maddalena in late February on its second Gulf of Guinea deployment in as many years. The deployment is part of U.S. European Command&#8217;s effort to strengthen the region by teaching regional militaries to defend against smuggling, piracy and terrorism.

It&#8217;s the first time that the Moose Boat sailors have been along for the ride. Usually, the harbor patrol crewmembers stay behind when the Land deploys.

The crew&#8217;s greatest challenge has been adapting force protection measures and tactics for the varying ports, which have included stops in Gabon, Ghana, Nigeria, the Congo and Angola.

There was no shortage of volunteers for the mission, said Petty Officer 3rd Class Benjamin McSwain, a master-at-arms.

Apart from interacting with locals during various port calls, he said, he is able to earn force protection qualifications on the deployment that he normally wouldn&#8217;t get while at home, which could help with promotions.