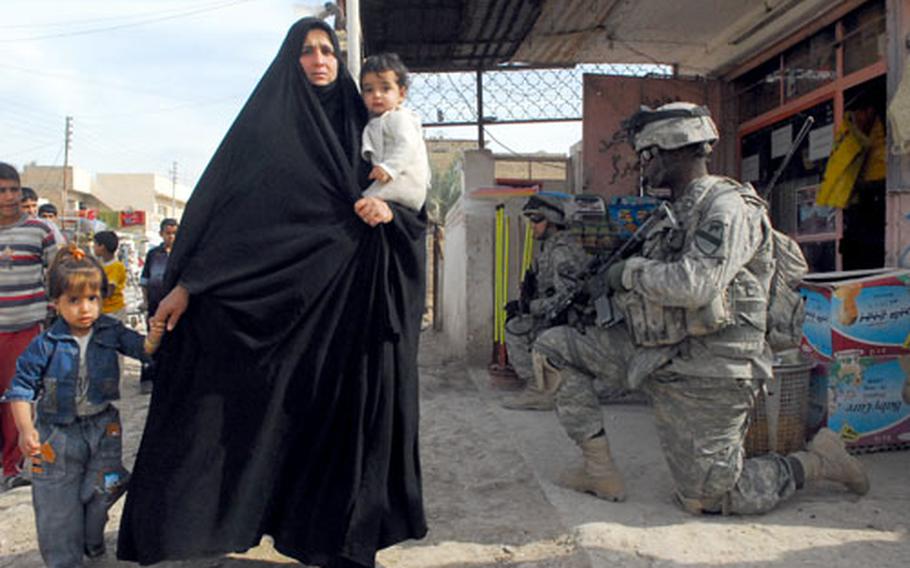 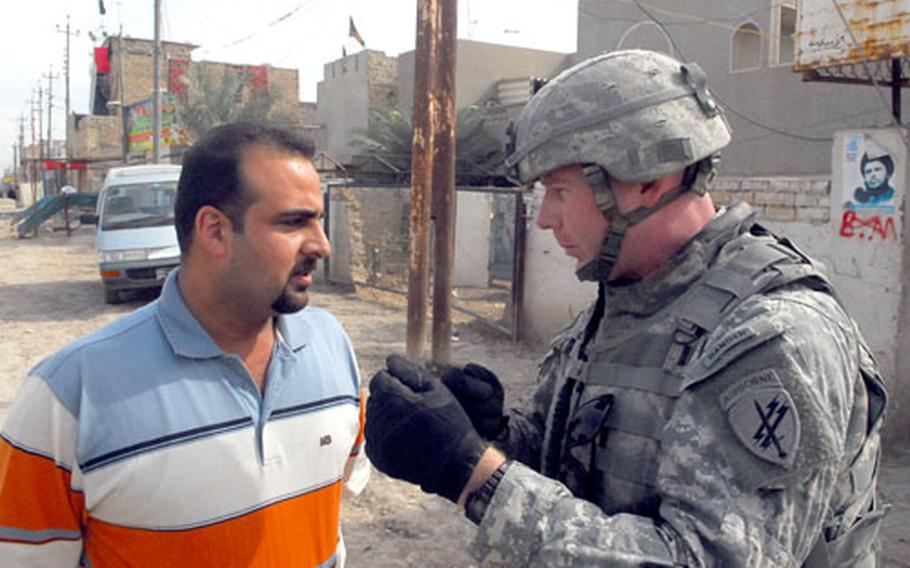 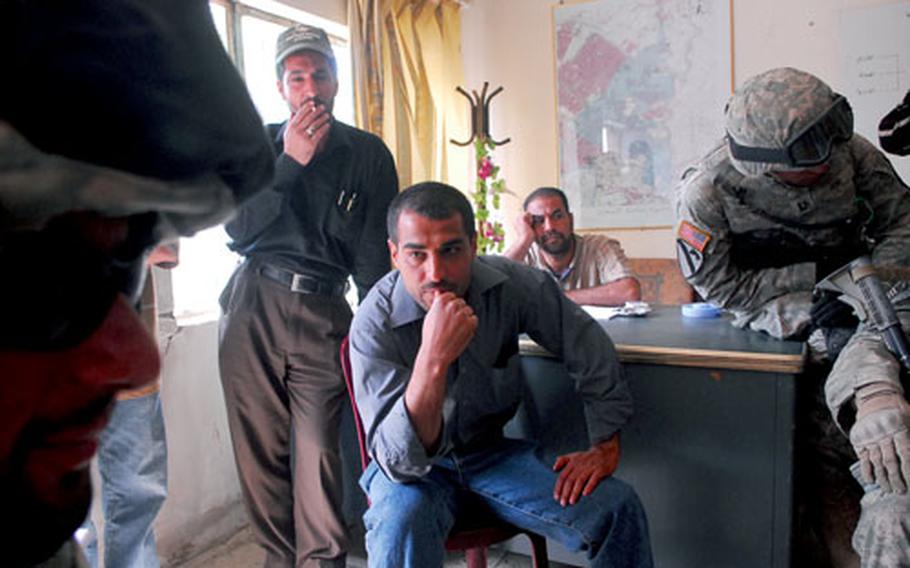 A group of local garbage collectors and suspected Mahdi Army militiamen in the east Baghdad neighborhood of Oubaidy cast wary glances at U.S. soldiers and their Iraqi interpreters during a recent visit to the group&#39;s office. (Monte Morin / S&S)

U.S. Army Capt. Bruce Beardsley and his civil affairs team had barely stepped from their Humvees in this dust-blown quarter of New Baghdad recently when a bank of speakers stacked beside a tattered market began blaring a Mahdi Army militia chant.

After fleeing to neighboring Iran or lying low in the face of a widely publicized U.S. troop surge, militiamen under the command of radical cleric Muqtada al Sadr &#8212; whom U.S. servicemembers have dubbed &#8220;Mookie&#8221; &#8212; are flowing back into eastern Baghdad&#8217;s sewage-scented sprawl.

The militia&#8217;s return has been marked by a recent spike in roadside bomb attacks aimed at U.S. troops, as well as a rocket or mortar attack on a nearby forward operating base &#8212; the first of its kind since the start of the new Baghdad Security Plan.

In the two months since Gen. David H. Petraeus, the top U.S. commander in Iraq, began implementing a plan to flood Baghdad with thousands of additional U.S. and Iraqi troops in an effort to quell violence between Shiite and Sunni Muslims, American soldiers and cooperative Iraqi security forces had enjoyed an unprecedented calm in Baghdad&#8217;s Shiite-dominated east.

In areas like New Baghdad, which skirts the vast Mahdi militia stronghold of Sadr City, attacks and execution-style murders plummeted by more than 70 percent.

And in another example, Forward Operating Base Rustimayah, in New Baghdad, was struck by rockets or mortars Tuesday &#8212; the first such incident of indirect fire in months.

The uptick in violence coincides with a trend of timing seen in the war &#8212; each of the last four years, April has proved to be a particularly combative month.

At the same time, Sadr has made recent statements renouncing his call for peace at the start of the security plan.

&#8220;They thought it was going to be a Saddam-style surge and that we would kill everybody. Instead, it was an American surge.&#8221;

The soldiers killed in the March 15 roadside bomb attack were attached to the 2nd Brigade Combat Team, 2nd Infantry Division, and were involved in the construction of a network of combat outposts that have become the hallmark of Petraeus&#8217; campaign.

In the past two months, thousands of U.S. troops have relocated from sprawling bases and taken up positions in small, austere outposts and joint security stations in neighborhoods throughout Baghdad. The tiny bases, which lack many of the amenities soldiers have grown used to, have been established in former government buildings, abandoned bunkers, snack-food factories and other available structures.

Sauer and other U.S. commanders hope the neighborhood presence will prevent Shiite militia violence from spiraling out of control. They have used the lull in hostilities to capture many of the midlevel Mahdi commanders who remained in the area, and have also established relationships with residents who are cooperating with U.S. forces.

&#8220;When the death squads moved through the neighborhood, everyone would button up and hide,&#8221; said Capt. Evans Hanson, a spokesman for the 1-8 Cav.

During a recent visit to the neighborhood of Oubaidy, Beardsley was met by an Iraqi man who said Sadr&#8217;s men were indeed returning to the area, and that the U.S. military should confiscate their small arms, such as Kalashnikov rifles and pistols.

&#8220;At the start of the security plan, the militia escaped away from the city,&#8221; the man said. &#8220;But now they are starting to come back. I believe in democracy, so I will speak frankly. The Americans only search for heavy weapons that will hurt American forces. This is wrong. The militia is not stupid, they don&#8217;t keep heavy weapons in their homes. But if American forces find AKs (Kalashnikovs) in their homes, they leave them. Why is this?&#8221;

Beardsley told the man that under Iraqi law, families were allowed to possess an AK-47 assault rifle, and that the U.S. military could not confiscate them.

The man shook his head.