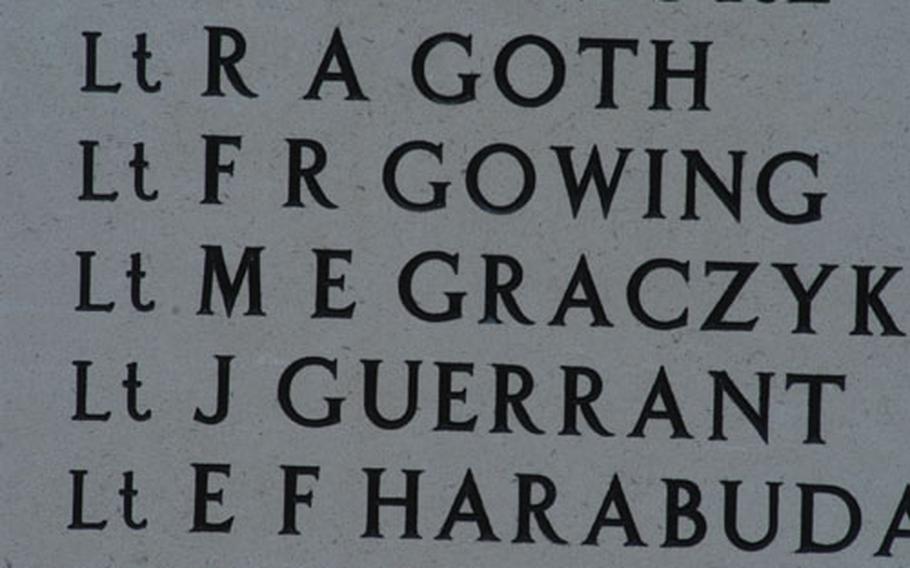 The names of men who died while serving in England with the 355th Fighter Group were unveiled Saturday in a ceremony at the unit&#39;s wartime base. The name of Lt. Me.E. Graczyk had special meaning for one person at the ceremony:Theresa Angileri, sister of a pilot who died while with the unit in World War II. (Ron Jensen /S&S)

The names of men who died while serving in England with the 355th Fighter Group were unveiled Saturday in a ceremony at the unit&#39;s wartime base. The name of Lt. Me.E. Graczyk had special meaning for one person at the ceremony:Theresa Angileri, sister of a pilot who died while with the unit in World War II. (Ron Jensen /S&S) 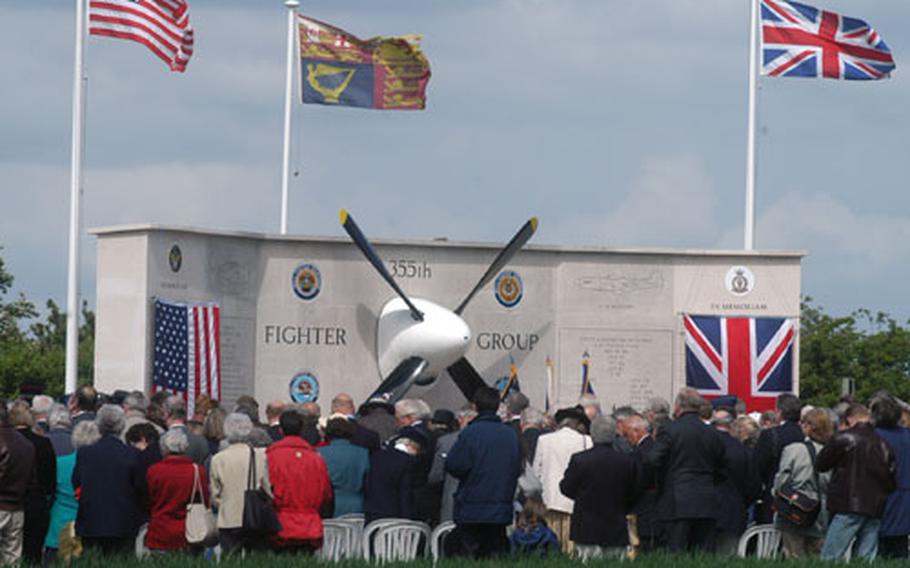 The base where the 355th Fighter Group was stationed during World War II is now an English wheatfield. But a memorial tells the story. More than 200 people gathered there Saturday to remember the aviatiors who died flying from the base. (Ron Jensen / S&S)

About 15 members of the unit that once made its home at a sprawling airfield near this little village west of Cambridge came to pay respects to the men who lived and fought from here during World War II, but never again saw home.

During a touching one-hour service, held at a monument dedicated to the 355th, more than 200 people paid respects to 99 Americans and more than 140 British, Canadian and New Zealand airmen who died while serving at Steeple Morden.

Their names were added to the monument, which was originally dedicated in 1981. The additions were unveiled beneath a cloud-filled sky, while a chilly wind rippled the ocean of green wheat that long ago replaced the old airfield.

The 355th Fighter Group, flying P-47s and later P-51s, moved to Steeple Morden in May 1943. During the two years it fought from here, the 355th gained a reputation for strafing German airfields and destroying enemy aircraft while flying only a few feet above the ground.

The unit is credited with destroying 339 aircraft and damaging 124 others, both on the ground and in the sky. The 355th received the Distinguished Unit Citation for its efforts, and became known as the Steeple Morden Strafers.

This visit is considered the final one for the veterans association, although individuals said they may visit again.

William &#8220;Tiger&#8221; Lyons, president of the 355th Fighter Group Association, spoke before a distinguished crowd that included the Duke of Gloucester, Vice Lord Lt. Michael J. Marshall and David J. Riddington, the High Sheriff of Cambridgeshire. Lyons said the outcome of the war was in doubt when the unit arrived 60 years ago this month.

They were all young, he said. Many died while still in their teens.

&#8220;Think about how you would feel if he were your son or your brother or your husband,&#8221; Lyons continued.

All of us today, he said, owe the freedom we enjoy to these men and others like them.

Following Lyons, the chief chaplain of the Royal Air Force, Air Vice Marshal Ronald Hesketh, said, &#8220;This country would be a different place but for what happened here.&#8221;

He asked the children in attendance to consider the monument behind him as their monument, and asked them to tell and retell the story of what happened here.