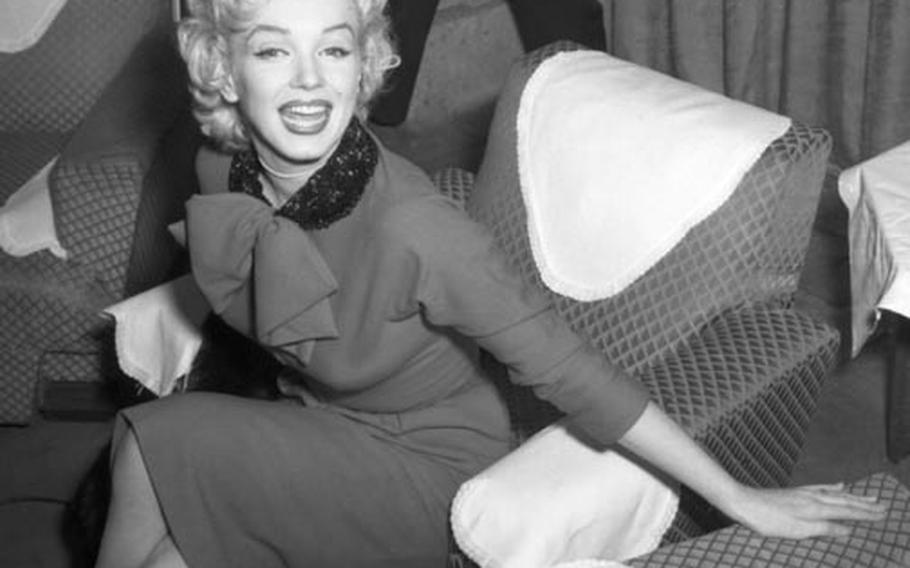 TOKYO, Feb. 3 &#8212; America&#39;s Princess of Pulchritude, Marilyn Monroe, dressed in a skin-tight, flaming red dress which had a habit of creeping up over her knees, turned on her 100-degree charm late yesterday at a press conference, attended by more than 150 reporters and cameramen.

Marilyn did most of the talking while Joe sat by her side and smiled at occasional remarks. "We&#39;re all overwhelmed at this," the blonde film star said.

Outfitted in the bright dress with black collar, black pumps, seamless stockings, carrying black gloves and a fox fur piece, and wearing a tiny pearl choker, which she said O&#39;Doul gave her, the shapely bride said she "might have some news about that later" when asked if she would visit Korea. "If I could get a piano player I might sing some songs in the hospitals there," she replied.

However, the question of a Korean trip was left undecided until the twosome have had a chance to complete plans here.

An numerous questions were asked about the number of children she planned, Marilyn gave noncommittal answers until Joe turned with a broad smile and said, "Why don&#39;t you ask me that question?"

Miss Monroe pointed out that there were several Hollywood actors she enjoyed working with but then turned and put her arm around DiMaggio saying, "But this is my favorite man."

Asked if she thought home life and career would mix, Joe answered for her with "It&#39;s going on every day."

When queried if she still followed her custom of not wearing lingerie, the only answer the famous actress would give was "I&#39;m planning on getting a Japanese kimono."