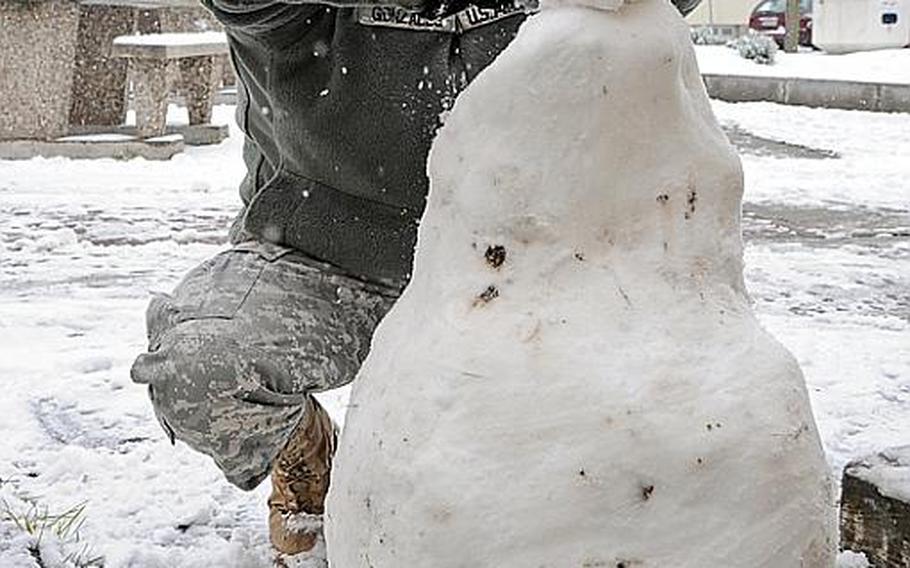 Buy Photo
Spc. Michael Gonzales, with the 39th Transportation Battalion and from San Antonio, builds a snowman outside the Kleber Kaserne dining facility in Kaiserslautern, Germany, on Monday afternoon. Many American military communities across Germany received their first heavy snowfall of the season. (Michael Abrams/Stars and Stripes)

KAISERSLAUTERN, Germany &mdash; Winter weather blew in across much of Germany with gusto Monday, as a steady snowfall from Kaiserslautern to Grafenw&ouml;hr sent some students home early, closed military facilities and made for treacherous driving conditions.

More snow is in the forecast. Starting after mid-day Wednesday and into Thursday, central Europe could see between 4 and 8 inches, with the heavier snow expected to hit western Germany, according to Airman 1st Class Michael Mikus with the 21st Operational Weather Squadron at Sembach.

Meteorologists at Sembach said between 4 and 8 inches were expected to fall in eastern Bavaria Monday.

&ldquo;We have patrols out doing route checks,&rdquo; he said. &ldquo;It&rsquo;s been continuing to snow all day.&rdquo;

Snowfall was lighter in the Kaiserslautern area &ndash; 2 to 3 inches were forecast by late evening &ndash; but the roads were slick. More than a dozen weather-related accidents on- and off-base were reported Monday, Air Force officials said. Military law enforcement officials would not say whether any accidents resulted in injuries.

Schools were not dismissed early, but many facilities at Ramstein, Vogelweh and Kapaun did shut at 4 p.m., including community centers and libraries at all locations, and Chili&rsquo;s, Macaroni Grill and J.R. Rocker&rsquo;s on Ramstein. All youth and adult education classes were also canceled Monday evening.

Road conditions were also deemed hazardous in Bamberg, where base workers were released early and most Army and Air Force Exchange Service facilities closed by evening.

DODDS-Europe officials said any decisions on school delays Tuesday won&rsquo;t be made until early in the morning. Base commanders make the call. Parents should tune into AFN or check base Web sites for more information.

Stars and Stripes reporter Dan Blottenberger contributed to this story.