Monaco?s tiny army, the Carabiniers du Prince, during a change of guard ceremony in September 2017. The force, which numbers just 119 men, is one of the smallest in the world. Although France is the guarantor of Monaco?s defense, the Carabiniers are equipped and trained to handle everything from soccer riots to terrorist attacks. (Slobodan Lekic/Stars and Stripes)

Monaco?s tiny army, the Carabiniers du Prince, during a change of guard ceremony in September 2017. The force, which numbers just 119 men, is one of the smallest in the world. Although France is the guarantor of Monaco?s defense, the Carabiniers are equipped and trained to handle everything from soccer riots to terrorist attacks. (Slobodan Lekic/Stars and Stripes) 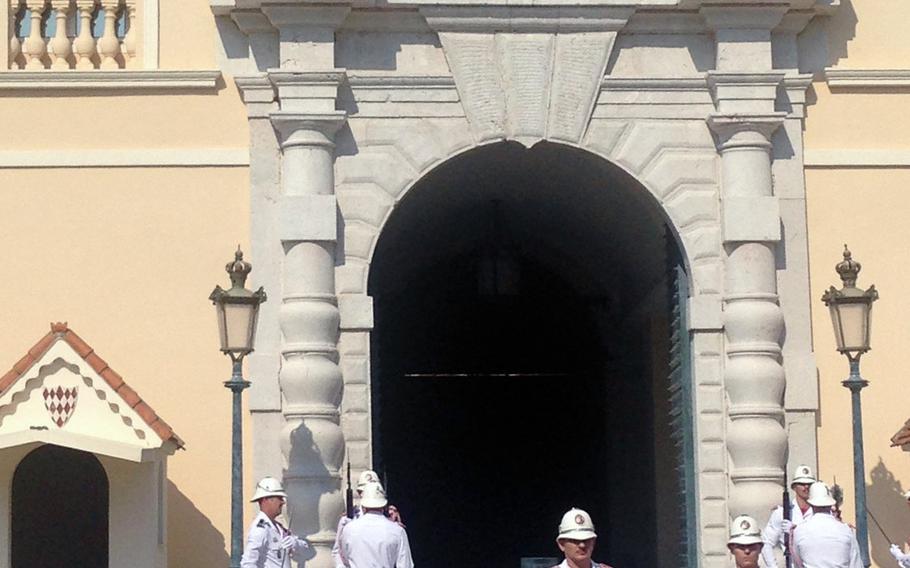 Monaco?s troops, the Carabiniers du Prince, during a change of guard ceremony in front of Prince Albert?s palace in September 2017. The daily ceremony draws throngs of tourists from all over the world. (Slobodan Lekic/Stars and Stripes) The marching band of the Carabiniers du Prince, Monaco?s tiny army, during a change of guard ceremony in September. The service?s rank and file are from both Monaco and France, but the officers are all French. (Slobodan Lekic/Stars and Stripes) 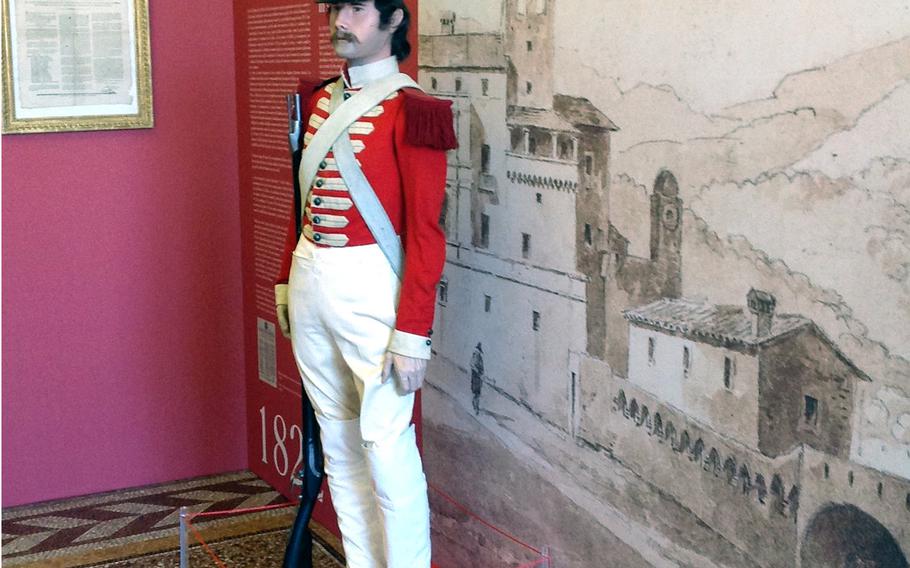 A museum inside the royal palace in Monaco features historical uniforms and weapons of the Carabiniers du Prince, Europe's second-smallest army. (Slobodan Lekic/Stars and Stripes)

MONACO — Every day just before noon, tourists throng to the square in front of the salmon-pink prince’s palace to watch the traditional changing of the guard ceremony.

“They’re so cute, I love these ‘mouse-that-roared’ soldiers,” said Jane Moore, a visitor from Canada. “Well worth a visit.”

Few of the spectators watching the ranks of troops — in their white uniforms in summer and blue in winter — realize they belong to a real army, albeit the second-smallest in the world.

With less than one square mile of space, Monaco is larger only than the Vatican — the world’s tiniest sovereign nation. But its 37,000 inhabitants make it the most densely populated sovereign nation on earth.

It is also arguably the richest, with an average per capita income of nearly $180,000. It has the highest proportion of millionaires and billionaires — 1 in 3 residents, officials say.

Monaco is perhaps best known for its legendary casino and the Formula One race through the streets of the principality. A world-famous harbor features dozens of the most expensive yachts anywhere. Ferraris, Aston Martins and Rolls-Royces create traffic jams in its narrow streets. Luxurious tower blocks dwarf its old center, making Monaco the planet’s most expensive property market.

To protect all that wealth and the glamorous lifestyle of its residents, Monaco has one of the largest security forces in the world on a per capita and per area basis, with about one soldier or policeman for every 100 residents.

The Prince’s Company of Carabiniers numbers 119 members of all ranks. Together with the 135-strong militarized fire and civil defense corps, the Carabiniers form Monaco’s defense forces.

Separately from the military, there are about 515 police officers and a small coast guard, whose main duty seems to be regulating yacht movements in and out of the harbor.

An exhibit documenting the history of the Carabiniers is located inside Prince Albert’s palace. It features historical uniforms and weapons of the unit.

It also documents the presence of the U.S. Navy in the ministate in the 1940s, ’50s, and ’60s, until French president Charles de Gaulle booted out the 6th Fleet from the nearby port of Villefranche-sur-Mer in 1967. Navy officers were often invited to Monaco to attend official functions with Prince Rainier III and Princess Grace Kelly, the current monarch’s parents. The couple were also regular guests aboard U.S. Navy ships and frequently visited with American families living there.

Though the constitutional monarchy relies on France, which borders it from three sides, for defense, its army not a ceremonial force. The Carabiniers are armed with some real firepower: M16A2 automatic rifles and infantry fighting vehicles such as the MOWAG Piranha V.

While their main duty is to protect Prince Albert II and government institutions, the troops are also trained and equipped to deal with more serious challenges, such as terrorist attacks.

Its soldiers and noncommissioned officers are either Monegasque or French citizens, but the officers are all French. Traditionally, many of the rank and file come from villages and towns near Monaco, officials say. A colonel is the force’s highest-ranking officer.

The average age of the servicemembers is 35. Enlisted men sign five-year contracts and can renew them until they are 50 years old, said Thomas Blanchy, a spokesman for the palace. NCOs may remain in service until age 55.

“Serving here is much more interesting than in the French army because the duties are much more varied,” said a Carabinier standing guard at the palace, who asked not to be named. “There are so few of us that everyone has to be trained and must execute multiple roles.”