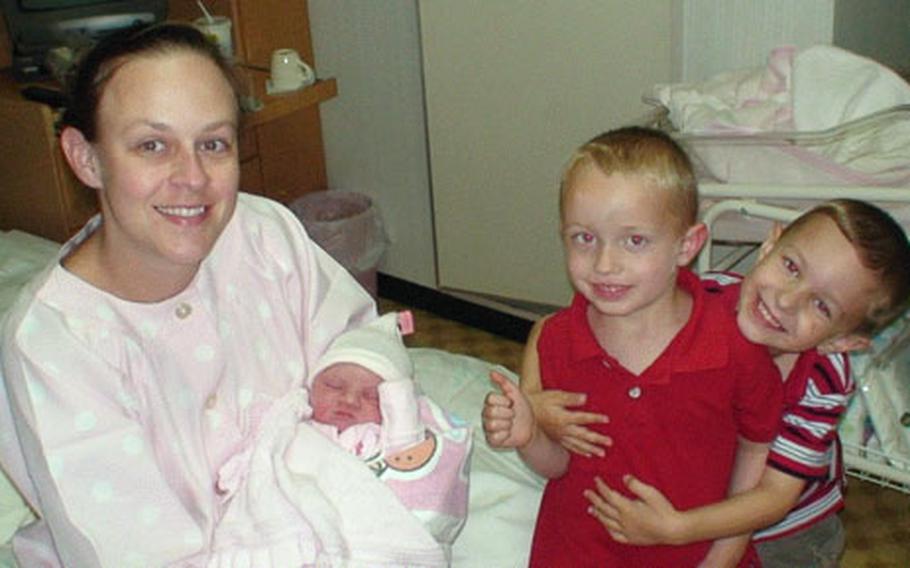 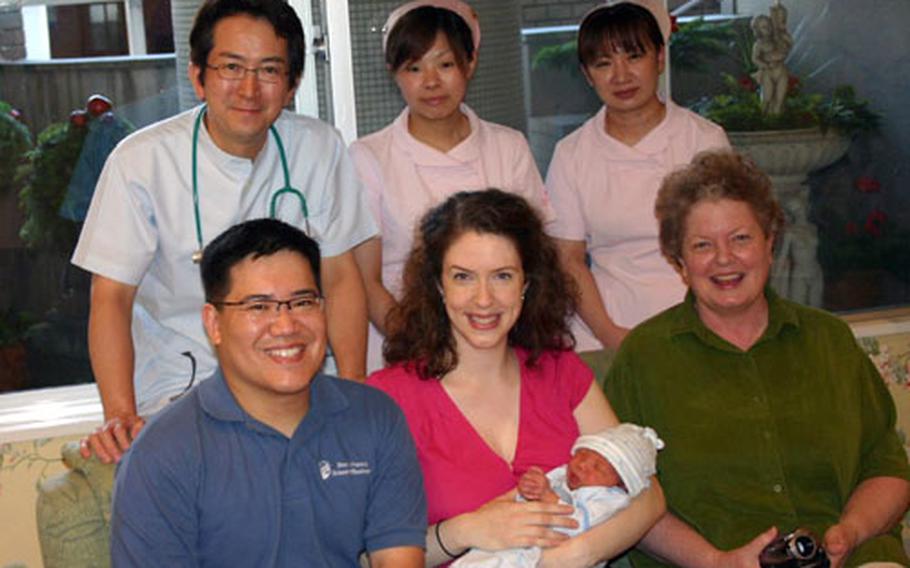 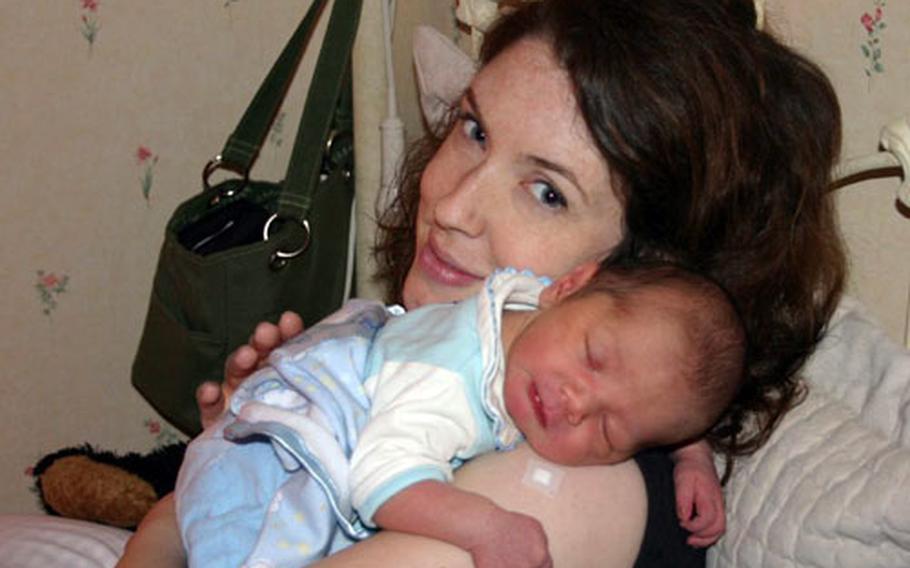 Erin Wang holds baby Jayden at the Higashijima Ladies Clinic in Sasebo last summer. Wang, who speaks Japanese, experienced some of the main differences between care in a Japanese facility and in a stateside hospital, including what she called “an old-school method of getting the baby out.” (Courtesy of Erin Wang)

MISAWA AIR BASE, Japan &#8212; Giving birth at a U.S. military hospital isn&#8217;t always a sure thing for expectant mothers assigned to or living on U.S. military bases in Japan.

As some women at remote bases have found, whether a Japanese hospital delivers one&#8217;s baby often comes down to location.

Indeed, many new mothers at Sasebo Naval Base and Marine Corps Air Station Iwakuni in southern Japan are well versed in the ins and outs of giving birth off base.

Neither base has a clinic equipped for labor and delivery. Women assigned to either area can opt to deliver at U.S. Naval Hospital Yokosuka, but most give birth locally so they can stay near home, officials said. At Iwakuni, women who opt to deliver at Yokosuka must travel there by bullet train, a six-hour trip that must be taken about five weeks before the due date, said Lt. Cmdr. Melvern John, department head of family practice at Branch Health Clinic Iwakuni.

And Sasebo is even farther away.

&#8220;Rarely do we have someone go to Yokosuka or Okinawa,&#8221; said Navy Cmdr. Marjorie Alexander, administration department head at Branch Health Clinic Sasebo.

While more convenient, the local option can be intimidating, with cultural and language differences heaped on top of normal pregnancy fears.

In Japan, natural births are favored over anesthesia, fathers are not always welcome in the delivery room and patients often share rooms after birth and stay in the hospital up to a week.

But two Japanese hospitals near Iwakuni and Sasebo bases cater to Americans, and giving birth there isn&#8217;t all that different, according to some moms. The key, they say, is to be prepared, know what to expect, ask lots of questions and keep an open mind.

Some distinctions, as Jennifer Toth found, can be a pleasant surprise, such as fresh bread and hot tea at every meal and pampering nurses.

She said the experience was relaxing, even better than her previous, stateside delivery.

The labor room, where soft music played, was peaceful, she said, and a nurse even gave her back rubs during labor. Food was usually a five-course meal with a choice of Japanese or Western-style. Not all the nurses spoke English, but the two doctors at the hospital did.

Of the approximately 80 pregnant women on record at Iwakuni at the end of December, most were going to Iwakuni Byoin, commonly referred to as &#8220;Dr. Shoji&#8217;s&#8221; after the hospital&#8217;s senior doctor Takashi Shoji, said Branch Health Clinic Iwakuni&#8217;s John. Americans have been seen there for about 18 years, John said.

John briefs the women on what to expect at the hospital, and will even give them a hospital tour.

Shoji and his staff cater to Americans, John said, providing epidurals upon request and letting mother and baby go home early if they don&#8217;t want to stay the suggested five days after a normal delivery. Fathers can even be in the delivery room.

Erin Wang, 31, who speaks Japanese, embraced the opportunity to give birth at a Japanese facility.

Unlike many Japanese hospitals, Higashijima provides pain-numbing epidurals. Wang, however, found out the hard way that it wasn&#8217;t a continuous-drip epidural like she heard was common in American hospitals.

Wang&#8217;s labor was difficult and long and at some point, when the baby still wasn&#8217;t coming out, the doctor asked Wang in English if &#8220;we can push your stomach,&#8221; she said. She agreed, not knowing that meant extremely painful full-body-weight pushing by a nurse on top of her.

Higashijima has been seeing Americans at his clinic for about 13 years. Of the approximately 40 babies he delivers each month, about eight are babies of base residents, he said.

Tricare Prime covers most costs for pregnant patients seen off base at Iwakuni and Sasebo, military officials said, requiring no out-of-pocket costs except for extras, such as a private room and birth certificate. Tricare Standard patients and those with separate insurance plans pay all fees at time of service and then submit their paperwork for reimbursement, officials said.

Facilities, staff available at most bases in Japan

At U.S. Naval Hospital Okinawa, public affairs officer Brian Davis said the hospital&#8217;s six obstetric/gynecological doctors deliver about 1,000 babies per year. The hospital has never had to send a mother-to-be off base due to lack of space or available physicians, Davis said, noting the hospital also is the referral center for complicated pregnancies in the Western Pacific region. And at U.S. Naval Hospital Yokosuka outside of Tokyo, expectant mothers are sent to a Japanese hospital only in the event of a complication, such as premature arrival, said Dr. Jacky Cheng, an OB/GYN.

Yokota and Misawa air bases both have hospitals staffed to deliver babies. Camp Zama and Naval Air Facility Atsugi near Tokyo don&#8217;t, but officials there said most of their mothers-to-be deliver at nearby Yokosuka Naval Base.

The Navy&#8217;s Storks Nest Program accommodates pregnant women who live at least 45 minutes away by housing them and their families in private barracks at Yokosuka as their due date approaches.