Mom, two sons benefit from closeness of serving together in South Korea 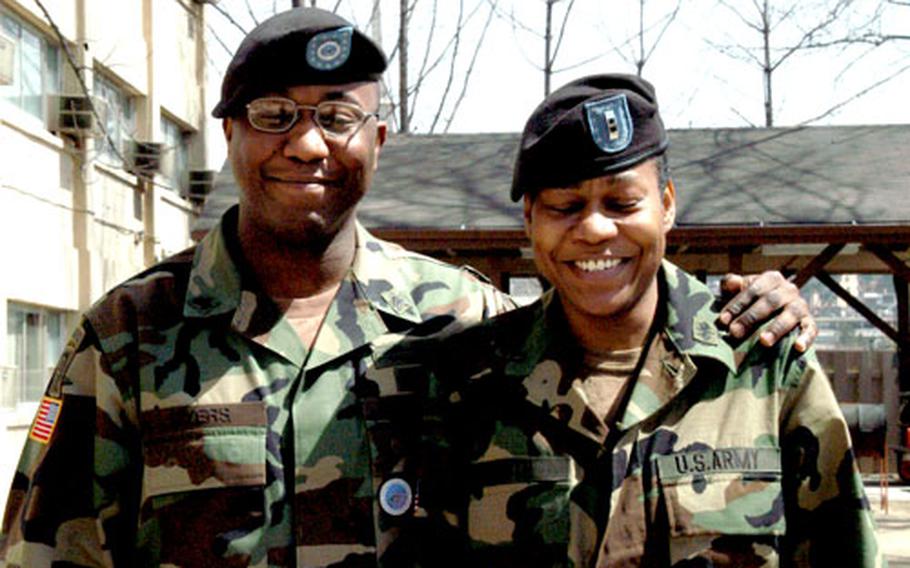 YONGSAN GARRISON, South Korea &#8212; Before Staff Sgt. Steven Myers came to South Korea last summer, it had been more than four years since he last saw his mother.

Now, she works across the street.

And Myers&#8217; younger brother, Spc. Deon Myers, 22, is stationed near Kunsan Air Base with the 178th Maintenance Company of the 35th Brigade.

Last fall, the three got together for Thanksgiving for the first time in years.

Their assignments are a convenient arrangement for the members of a family of six that&#8217;s lived with military moves and deployments for nearly two decades.

Smith joined the Army in 1986 to give herself and her five children a chance to get out of East St. Louis, Ill., and into a stable career. As a single mother with four boys and a girl, she carted the group to North Carolina and Germany and South Korea, but sometimes had to leave them in Illinois with other family members.

She&#8217;s missed most of her children&#8217;s weddings (one just last month) and the birth of all five grandchildren, but she&#8217;s made it to all but one high-school graduation. Her final one will be May 20, when her youngest son, Jermaine, graduates in Illinois. She&#8217;s planning to fly back.

But the military, Smith says, has provided opportunities that balance those hardships. She is five classes away from finishing her undergraduate degree, and she&#8217;s planning her retirement for the next three years. She&#8217;ll have enough money to move to New Mexico and volunteer with poor, inner-city children, she said.

She also gets to do some not-so-ordinary motherly duties: Later this month, she&#8217;ll participate in Steven&#8217;s promotion ceremony to staff sergeant.

She and her sons have crossed paths at other times. She and son Michael Myers, 21, were in Iraq together at neighboring units, though they never saw each other and she and Steven met once at Fort Bragg, N.C.

Smith says she didn&#8217;t push her kids toward the military.

Deon plans on doing just that when his tour is up next year. Michael already has bowed out, Smith says. He plans on starting college soon and just got married last month.

His mom was in Afghanistan when he signed up, and when he got back, she was mad.

Fun, yes, and danger, Smith knows. She&#8217;s spent six months each in Iraq and Afghanistan, while Steven did back-to-back tours in Iraq and Michael was deployed as well. She&#8217;s off to Kuwait in June.