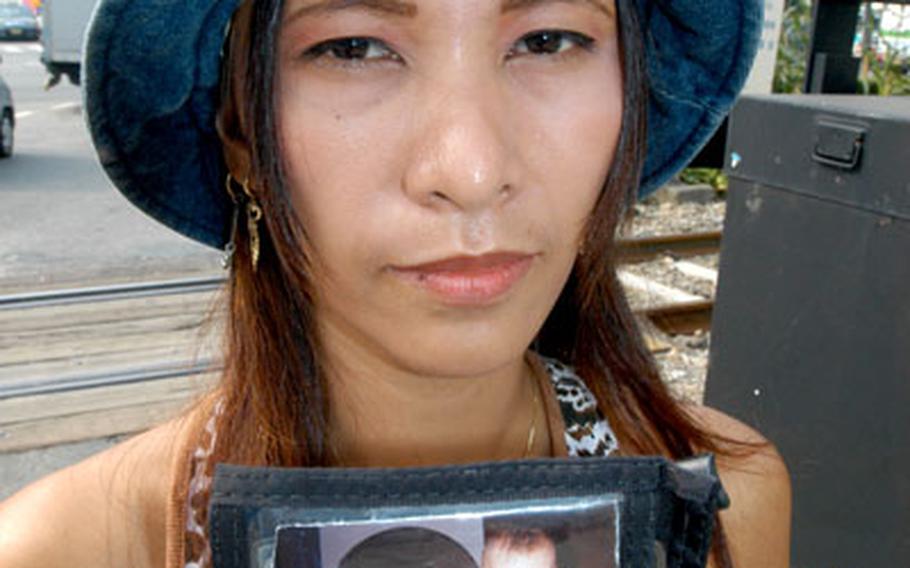 Ederlyn Gerrard holds a picture of her baby, Monica, outside the front gate of Camp Red Cloud. Ederlyn has accused her husband, Army Sgt. Thomas Gerrard, of improperly taking the infant to the United States. (Seth Robson / S&S)

CAMP RED CLOUD, South Korea &#8212; U.S. military authorities say they cannot help a woman whose husband, a U.S. soldier, took their baby daughter this month to live with his mother in Washington state.

Korean aid officials, who most often work to get support from military fathers who leave their children behind in South Korea, say it&#8217;s a rare case made even more difficult by the fact the mother is a Filipina, not South Korean.

The mother, Ederlyn Gerrard, 30, contends her estranged husband abducted the 7-month-old girl, Monica, and also says she and her two children from a previous marriage are facing eviction because he has not paid the rent on their apartment.

He told Stars and Stripes in a telephone call to his home in Washington state last week that he took the child but had done nothing illegal.

He added that the Army requires him to give a percentage of his pay to his wife and that he has been wiring her money in excess of the requirement.

He said this week that he intends to keep Monica in the States at least &#8220;until the legal matters between our marriage have been taken care of.&#8221;

He is to return to South Korea this week.

When her husband did not return her call on his cell phone that night, she said, she went to his office at Camp Red Cloud the next day. She said soldiers there told her that her husband was on emergency leave and there was nothing she could do to get her baby back.

She said she received the same advice from military police, Army Community Services and the staff judge advocate general&#8217;s office.

Maj. Karl Ivey, 2nd ID spokesman, said the division could not get involved in the case because it was the couple&#8217;s private business.

If Ederlyn Gerrard wants to get her daughter back, Eddie-Callagain said, she should retain lawyers in both the United States and South Korea.

However, Kim Jong-hyun, with the Korea Legal Aid Center for Family Relations, said South Korea has no agreement with the United States to return children involved in custody disputes.

He said Ederlyn Gerrard could file a criminal lawsuit against her husband in a South Korean court asking for the child to be handed over. But the penalty for not complying with such a court order is only a small fine.

Abraham R. Estavillo, Charg&#233; D&#8217;Affaires at the Philippines Embassy in Seoul, said in an e-mail that &#8220;we are saddened by the turn of events involving our nationals who are married to U.S. soldiers. Most enter into a relationship not much because of love but other reasons like residency in the mainland. Much as we would like to correct the situation, we are really helpless as we could not control their emotions.&#8221;

Estavillo said the embassy would act only on the personal request of Ederlyn Gerrard, but he warned that the case may not necessarily be an abduction if the U.S. soldier is the father of the baby and the wife is not in the position to support her daughter.

She said Monday that she plans to contact a member of Congress in Washington state in hope the lawmaker will investigate the case and work to change the law so that foreign-born spouses have more rights when they marry U.S. servicemembers.