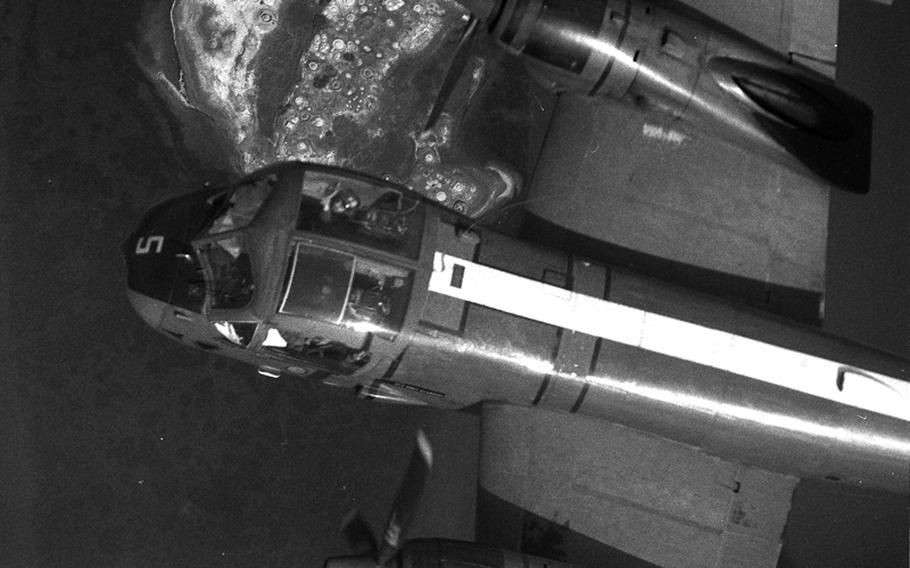 An OV-1 Mohawk crew member waves to the photographer during a 1971 flight over Vietnam. (Dan Evans/Stars and Stripes)

An OV-1 Mohawk crew member waves to the photographer during a 1971 flight over Vietnam. (Dan Evans/Stars and Stripes) 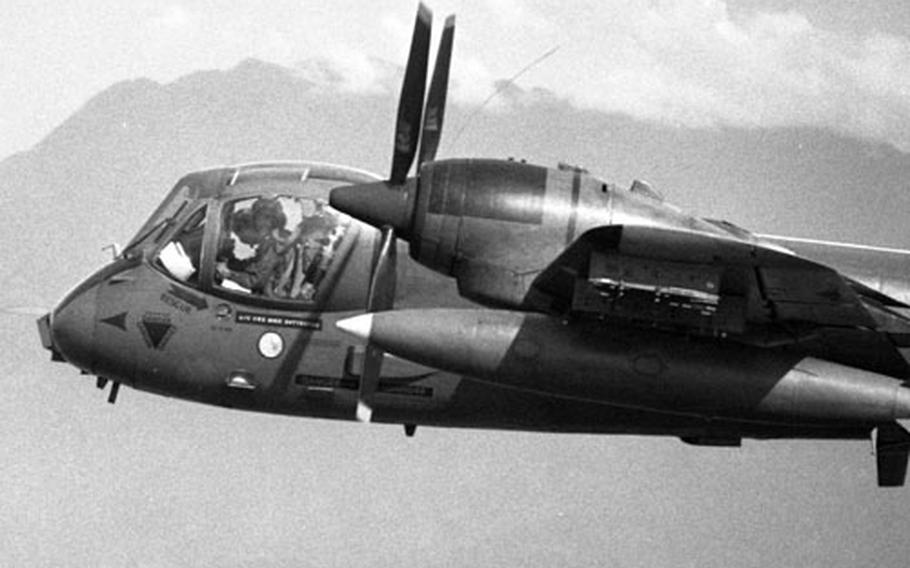 An OV-1 Mohawk in the air over South Vietnam in 1971. (Dan Evans/Stars and Stripes) 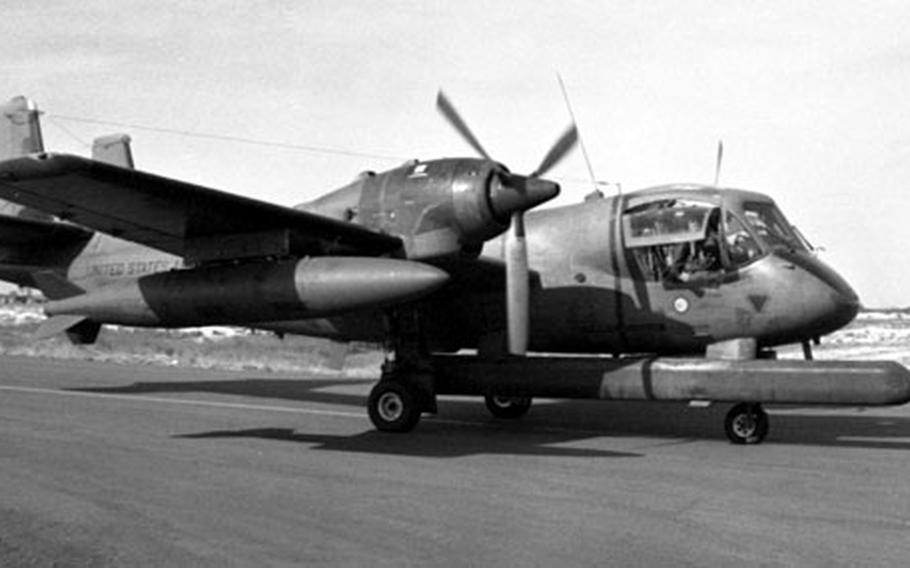 An OV-1 Mohawk on the ground at its base at Phu Bai, South Vietnam, in 1971. (Dan Evans/Stars and Stripes)

PHU BAI, Vietnam &mdash; The pilots and tactical observers of the Army's 131st Aviation Co. "hang it out" every day over territory where dodging antiaircraft fire is taken for granted, and where there is always a possibility of meeting enemy MIGs or surface-to-air missiles.

Danger spells fame for many units but few people have even heard of the 131st.

The plane they fly is an unarmed OV1 Mohawk with a top speed of something over 300 miles an hour in a dive. A MIG can do about twice the speed of sound and may be armed with 30mm cannon and air-to-air missiles.

If a MIG shows up, the Mohawk pilot must rely on evasive tactics or cloud cover and hope that F4s are scrambled in a hurry, said Capt. Nelson Modrall.

Capt. Lawrence Hower has seen three SAMs launched during two tours in Vietnam as a Mohawk pilot. Once a pilot gets "eyeball-to-eyeball contact" with a SAM the missile can be outmaneuvered, he said. Despite its lower speed, the Mohawk can turn twice as sharply as a SAM.

During operation Lam Son 719 Hower and another pilot had part of their tail shot away by an AA round. The plane began to go out of control but with both men straining at the controls they made it safely back to Da Nang.

Mohawks are equipped with infrared, radar or photo surveillance systems but the 131st cannot divulge where its planes fly.

They work in conjunction with Air Force C119 and C130 gunships over the Ho Chi Minh Trail complex, helping to kill "movers" and disrupt the flow of supplies.

Some of the pilots feel that this is their most dangerous mission. They say the biggest threat is not AA fire, but other U.S. aircraft. Most of the men fly their missions with their lights on.

"You can come back with AA holes in the aircraft but you can't make it back with an F4 stuck in your side," Modrall said.

Like all pilots who fly craft loaded with electronic surveillance gear, the men who fly the Mohawks get little recognition. While Army, Navy and Air Force pilots made news around the world during Lam Son 719 the 131st logged 800 hours over the same areas without getting a mention.

There is a certain amount of reassurance in flying over enemy territory with numbers of friendly planes nearby, despite the danger of collision. But it's eerie to fly repeated passes in a lone, unarmed aircraft over a patchwork of jungle, roads and cropland that you know is studded with enemy hardware.

Awards are hard to come by in the 131st.

"Stamp the word 'secret' on an award citation, and it gets lost for sure," a pilot explained.

The unit has been in for a presidential unit citation since 1967. The pilots said the award is now close to being up for consideration.

Until a few weeks ago, the planes of the 131st were armed with rockets like those carried on forward air control planes and helicopter gunships. The pods were taken off because there was no authorization for armament, the pilots explained.

"As soon as we look them off, they started shooting at us all the damn time," said Capt. Dave Krichbaum. Only a few days after the pods were dropped the unit lost a ship and two men, apparently to antiaircraft fire, pilots said.

The pilots said that though the rockets were rarely used the pods deterred enemy gunners from firing at the planes. The armament would also help protect downed pilots, they said.

Despite all the hazards, the long flying hours and the lack of recognition, none of the pilots are complaining unless it's about the excitement which does not always materialize.

"You know," one pilot mused, "sometimes our work is pretty boring."