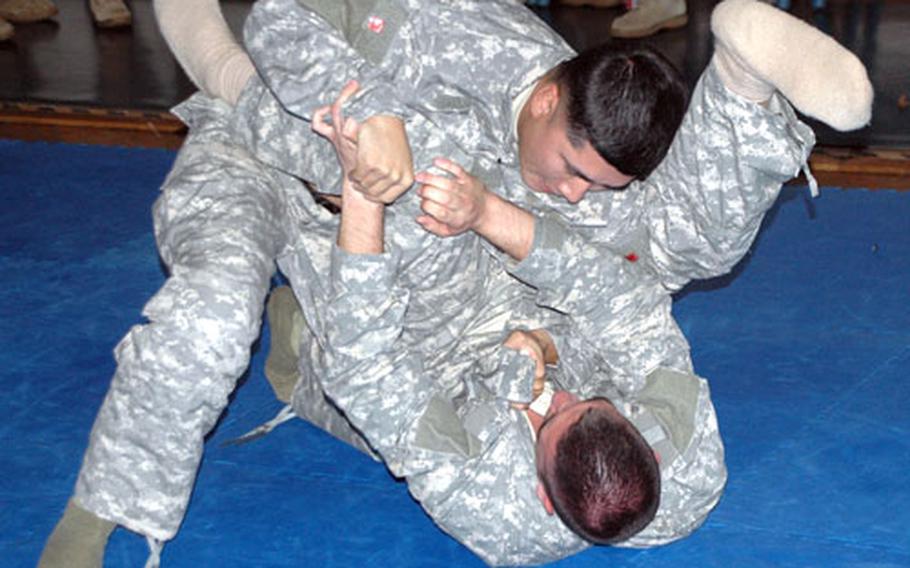 CAMP ZAMA, Japan &#8212; A fight between two soldiers broke out in the middle of a classroom Thursday at Camp Zama. While they wrestled on the floor, other students gathered around to cheer them on.

No, it wasn&#8217;t a beef that turned to violence; it was Army combatives training.

Officially known as the Modern Army Combatives Program, or MACP, it was created in 1995 to teach hand-to-hand combat to soldiers. Based on a style of Brazilian jujitsu along with other fighting techniques, MACP was developed by Army Rangers and since has spread throughout the Army.

&#8220;It&#8217;s a different type of war we are fighting in Iraq, and these are the types of hand-to-hand skills that are used downrange,&#8221; said Spc. Dianne Peele, one of the instructors from U.S. Army Garrison, Japan.

She was teaching soldiers drills from the first of four levels of combatives skill sets to help them prepare for level-one certification. At that level, soldiers learn basic ground maneuvers such as submission moves, chokeholds and how to achieve a dominant body position.

Levels three and four, which are taught at Fort Benning, Ga., focus on training the soldier as an instructor and helping develop skills necessary to manage a combatives program for their unit or installation.

&#8220;Honestly, I like choking people out,&#8221; said Peele, a level-one instructor for six weeks, explaining that a chokehold allows someone even of her small stature to take down a much larger opponent.

Combatives has been fully incorporated into the Army with the creation of a field manual and its addition to the list of Warrior Core Tasks.

Although combatives has been taught to soldiers in basic training for the past few years, not everyone in the Army is familiar with the program, Peele said, especially the more senior soldiers.

Sexton said the training is important, and he plans to go least as far as level two.