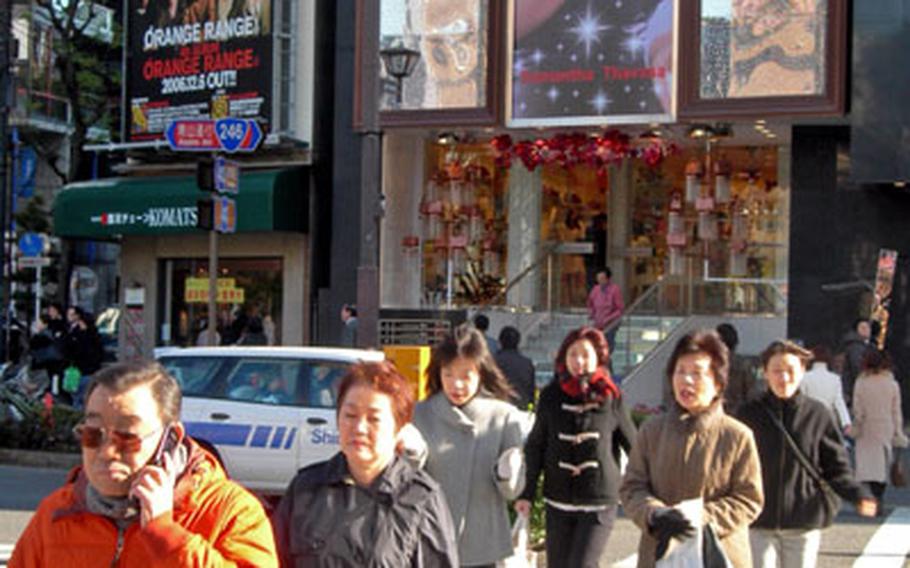 YOKOSUKA NAVAL BASE, Japan &#8212; By day, Roy Rommelman is a work and family life consultant at Yokosuka Naval Base. On evenings and weekends, he might be a televised American wrestler or a frustrated barber in some punk DVD art &#8212; it all depends on the gig.

In his forties, Rommelman has taken up a second career as a foreign model in Japan. It&#8217;s pretty easy to do, as agencies don&#8217;t require silicone-injected stick-thin Amazon women or steroid-filled hunks of male muscle mass. Qualifications can be as simple as &#8220;Look foreign. No experience necessary.&#8221;

&#8220;I think it&#8217;s much easier for foreigners to get modeling jobs in Japan because they are rare,&#8221; explains Marianna Harada of Harada International Productions in Tokyo. A large percentage of her models hail from American military bases, where multiculturalism abounds.

&#8220;There is a very good chance of finding the type [of person] the client is looking for because of the big selection possibility almost in every age and category,&#8221; Harada said.

Beyond her first tooth and wee handprints, little Aurora Brant&#8217;s baby book is going to feature her face in Japanese advertisements. The 2-month-old has pulled in $500 before she can walk. Her 8-year-old sister, Kaile, has taken in $3,000 so far.

Their mom is Wendy, a Fleet and Family Service Center contractor at Yokosuka Naval Base who also models off base.

Masae Hayashi, the manager of Sugar and Spice&#8217;s international modeling division, agrees. About 60 percent to 70 percent of Sugar and Spice&#8217;s models are military kids from Yokosuka Naval Base, Naval Air Facility Atsugi and Yokota Air Base, she said. Her newborn to 18-year-old models work in everything from movies and fashion magazines to department store flyers and English conversation videos.

The clients call the agencies and tell them what they&#8217;re looking for, and the agency sends them photos of prospective models. The client may make a decision based on the pictures, called a &#8220;photo selection,&#8221; or have the agency call people in for auditions.

Beyond money, modeling is a great way to get to know Japan, Brant said.

Not all glitz and glamour

But even working with the beautiful people has its blemishes and is not for everyone, models say. Best to stand in front of the camera with your eyes open.

Brenda Connor, who organized Yokosuka&#8217;s last modeling fair, advises prospective models to make sure they understand the contract with their agencies.

Some agencies are exclusive and won&#8217;t allow their models to take jobs outside what they offer, Connor said. Other agencies charge registration fees up to 3,500 yen (about $30) to be on their roster. Agency commissions also vary, but according to English-language news Web site Japan Today, agencies can take up to 60 percent commission on each job.

Time also is a factor, Brant said, as a lot of the jobs can materialize on short notice and cause difficulty for working parents.

And it&#8217;s good to know the tricks of the trade, like understanding that movies and television pay less than advertising because of the lack of royalties, Brant said.

For child models, parents need to know that the days can be long, with lots of downtime during which kids will be expected to entertain themselves. Misbehaving children can get a &#8220;reputation,&#8221; Brant said, and probably won&#8217;t get called back.

A good way to try modeling on for size is by attending base modeling fairs, Rommelman said. A fair last September at Yokosuka Naval Base brought out more than 750 prospective models &#8220;of every age, shape and size,&#8221; Connor said.

No registration fees were charged to talk to the 10 agency representatives attending, but participants had to pre-register, she said. The next modeling fair will be held sometime this year, she said.

How to become a top model ... if you&#8217;re SOFA sponsoredIf you are sponsored under the status-of-forces agreement, you can&#8217;t just walk off the base and onto a runway.

Modeling in Japan is considered off-base employment, which requires command endorsement. Every branch of the military under the U.S. Armed Forces Japan policy 36-10 needs permission to work out in town, but each branch, and sometimes each installation, has their own guidelines for work in commercials, radio, stage, television, motion pictures, recordings or public entertainment.

For example, here is the Commander, U.S. Naval Forces Japan policy. Check with your command to see which rules apply to you:

Auditions versus paying gigs: CNFJ requires permission for paid jobs, but not for auditions.If you apply before you&#8217;re hired, you&#8217;re allowed to indicate &#8220;various modeling agencies&#8221; as the potential employer.If modeling is going to be a family activity, you can submit one request for multiple family members i.e. self, spouse, son, and daughter.No nude modeling &#8230; Getting permission is contingent upon what the company is advertising, how the SOFA person will be represented and the nature of the theme of the job or activity for which the modeling is being done. (see bullets below)The job has to meet these guidelines:

It cannot interfere with official duties.It is not detrimental to the best interests of the U.S., nor contrary to the standards of the conduct, nor will injure the dignity/stature of the U.S.Employment is not connected directly or indirectly to prostitution, narcotics or drugs.Employment does not facilitate sales/service of alcohol to the Japanese public.Employment is not lewd or could be considered offensive to the Japanese or American public.No uniforms. The regulation also states that if doing public entertaining, you will not wear the military uniform or make reference to your service affiliation, rank and organization.You will pay taxes! The CNFJ response letter states that people working on the Japanese economy are subject to rules and regulations of the government of Japan, including payment of taxes. CNFJ provides personnel with the taxation bureau phone number. Legal advice is recommended to figure out how best to comply with the regulation.Related stories:

Three-year-old is ready for her close-up

Before you strike a pose, check your visa