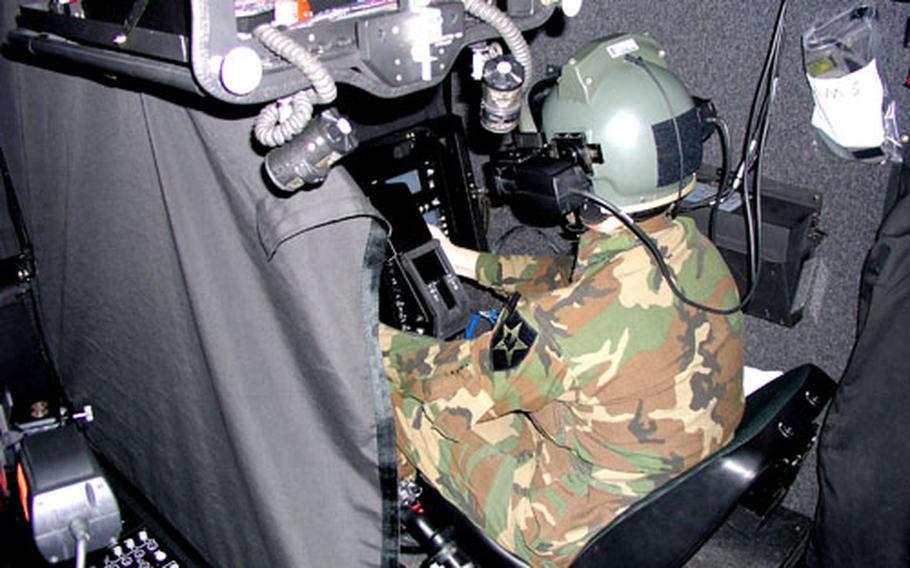 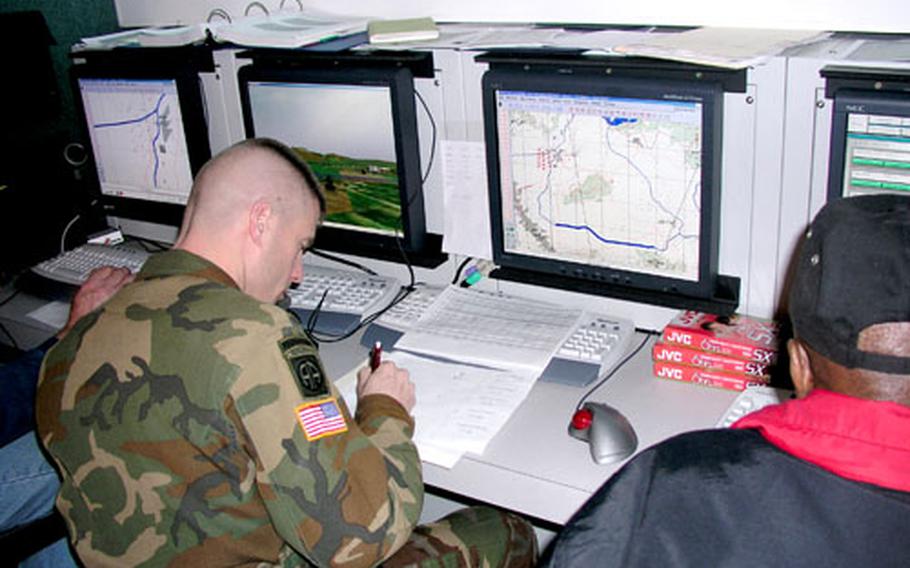 CAMP HUMPHREYS, South Korea &#8212; Under cover of darkness, the flight of five Apache Longbow helicopters was nearing the target area, the crews relying on their high-tech cockpit displays to show them enemy helicopters parked in a staging area.

Their mission was to use their Hellfire missiles to take out the helicopters below and a building believed to house infantry who&#8217;d later board those helicopters for an air assault.

Hellfire missiles fell away from their mounts and sped through the darkness toward their targets.

And if the troops in the barracks had been spared the first missiles, it had only been for a matter of seconds.

The raid was not in Afghanistan or Iraq: Woelke and the other aircrews were at Camp Humphreys.

Each Apache crew &#8212; a pilot and co-pilot-gunner &#8212; was strapped into the narrow confines of an Aviation Combined Arms Tactical Trainer flight simulator. The AVCAT is an electronically sophisticated mock cockpit that allows pilots to practice combat and other missions in what they say are remarkably realistic conditions. It can be set up to simulate not only the Apache but the Army&#8217;s Black Hawk, Chinook, and Kiowa Warrior helicopters, too.

Woelke and the others are members of Company A, 1st Battalion, 2nd Aviation Regiment, part of the 2nd Infantry Division&#8217;s 2nd Combat Aviation Brigade. The battalion is stationed at Camp Eagle near Wonju; the brigade is headquartered at Camp Humphreys.

Their mock mission last Friday was part of a brigadewide combat-readiness assessment carried out by a team from the U.S. Army Aviation Warfighting Center at Fort Rucker, Ala. The team is from the center&#8217;s Directorate of Evaluation and Standardization and wrapped up its visit on Monday.

Aviators took written tests in general aviation knowledge and other topics. There also were oral exams and evaluations of skills during actual flights. And there were the combat missions flown in the simulators or in actual flights.

The pilots see the cockpit display screens and other flight instruments of their actual aircraft type. They have to perform each step in the simulator much as they would in an actual aircraft &#8212; maneuvering the aircraft, dealing with in-flight emergencies, keeping station with other aircraft, using radios, aiming and firing weapons.

Simulation controllers can feed in video images of targets and terrain features and can design a mock mission with whatever weather, targets, enemy forces and other elements they want it to have.

The simulators, six altogether, are housed in one of two long white trailers mounted side by side. In part of the adjacent trailer is the master control room. There, the mission can be managed by the unit&#8217;s operations staff, assisted by civilian technicians.

&#8220;So we&#8217;re able to execute a company mission with all the crews that a company would normally be able to put on a mission,&#8221; said Blum, &#8220;do so against a tough, realistic threat &#8230; but without our having to worry about the weather stopping us &#8230; not having to worry about maneuver damage. Just a great opportunity out there.