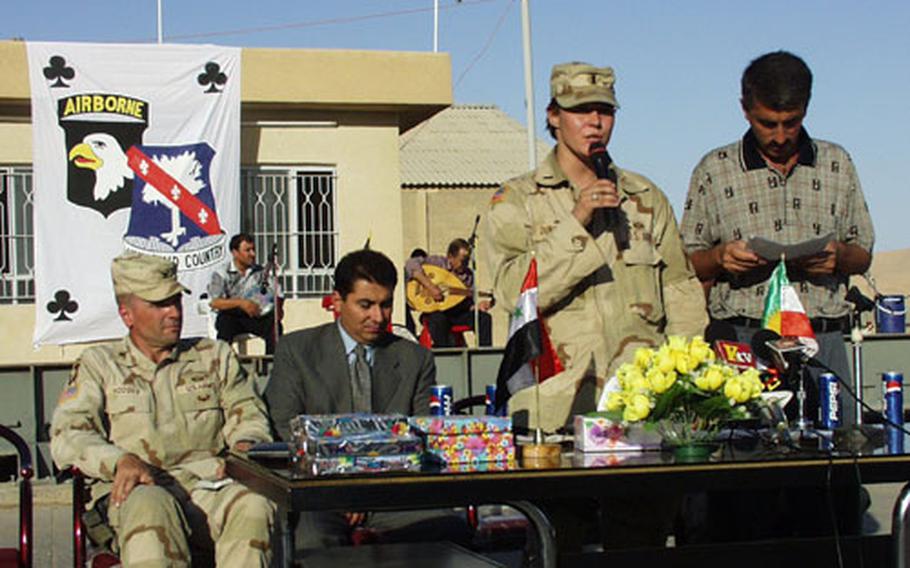 Donckers and her platoon of military police not only protect a 48-kilometer-square section of the Ninewa province, they have developed a mobile, two-week police academy.

It has graduated five classes of Iraqi cops who are taking responsibility for the security of their people.

The Bastogne Brigade arrived in northern Iraq in early May and set up its headquarters at Qayyarah West Airfield, about 30 miles east of Mosul.

Through April, the MPs assigned to the brigade worked to &#8220;secure the area &#8212; looking for [weapons] caches, clearing off looters, and so on,&#8221; Donckers said during a late-night interview last week at the airfield.

The MPs first paid the local cops two months of back wages.

Next, the military police started patrolling with the Iraqis, &#8220;to help give them confidence,&#8221; she said.

So Donckers and her senior NCOs developed a two-week training schedule.

The soldiers created a mobile academy of sorts that moved from town to village, training several dozen people at a time. Five classes have taken the course and one more is schedule to take it before a more permanent police academy is created in Mosul, Donckers said.

There is a lot to cram into two weeks, and the schedule is intensive, Donckers said.

That said, the training project has had its share of challenges, Donckers said.

One major issue has been literacy.

Another barrier was language. Both Arabic and Kurdish are spoken in the region, and neither language bears any resemblance to the other.

Translators helped, but so did the mime skills the military police created.

The MPs also had to make some adjustments regarding weapons. The U.S. military is outfitting the Iraqi police with cleaned and reconditioned Soviet-made weapons captured from illegal caches.

&#8220;So what we did was to find someone in each group who is proficient and let him teach marksmanship to the others,&#8221; Donckers said.

The MPs also quickly learned to assign each class an Iraqi group leader.