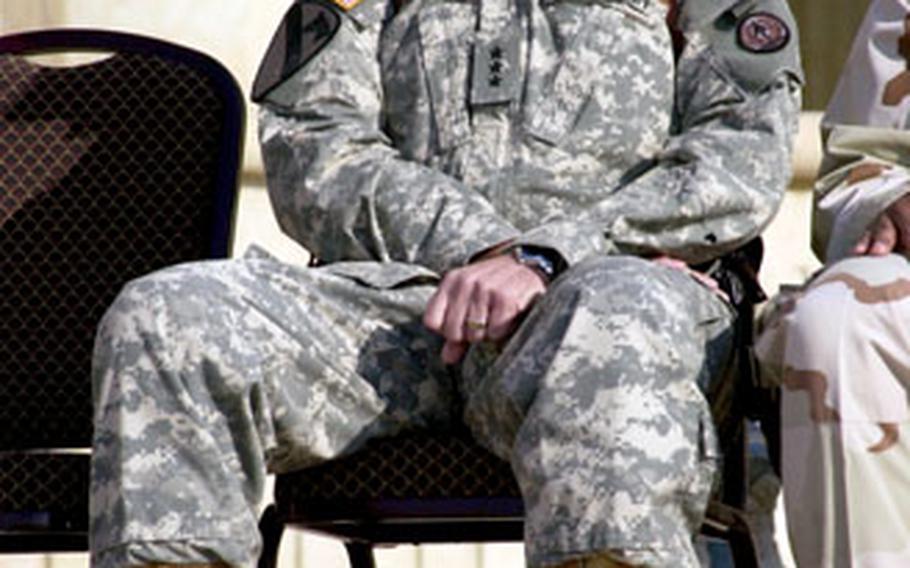 Lt. Gen. Peter Chiarelli, seen here in May, has been tapped for duty in a newly created post as a senior adviser to the chief of U.S. Central Command. (Joseph Giordono / S&S)

The second-ranking U.S. commander in Iraq has been tapped for duty in a newly created post as a senior adviser to the chief of U.S. Central Command, the Pentagon announced late Monday.

Lt. Gen. Peter Chiarelli, who has commanded Multi-National Corps-Iraq since January 2006, has been nominated as special assistant to the commander, U.S. Central Command for the development of regional military capability.

Chiarelli would begin those duties after handing over command of MNCI to Lt. Gen. Raymond Ordierno and III Corps in mid-December, MNCI spokeswoman Lt. Col. Michelle Martin-Hing said Tuesday. The MNCI post is Chiarelli&#8217;s second command position in Iraq &#8212; from March 2004 to February 2005, he commanded the 1st Cavalry Division in Baghdad.

&#8220;Lieutenant General Chiarelli&#8217;s experiences, contacts and understanding of regional issues give him a perspective that CENTCOM looks to draw from to help regional partners help themselves,&#8221; Maj. Matthew McLaughlin, a CENTCOM spokesman in Tampa, Fla., said Tuesday.

&#8220;This is about better enabling regional partners to help themselves. Lieutenant General Chiarelli has the tools to help in this important area.&#8221;

Chiarelli will be based in Tampa but work throughout the Central Command area, which includes the war zones in Afghanistan and Iraq.

&#8220;He will focus on building regional capability to include training, equipping, building infrastructure and mentoring,&#8221; McLaughlin said.

The commander of CENTCOM, Gen. John Abizaid, &#8220;wants to retain [Chiarelli&#8217;s] unique experience to help in one of the linchpin areas of our long-term strategy,&#8221; McLaughlin said.

When he took command of MNCI in January after about a year in Texas, Chiarelli likened the return to seeing someone for the first time in years.

In the same Pentagon announcement released Monday, Army Maj. Gen. Joseph F. Peterson was nominated for a third star and assignment as deputy commander and chief of staff of the U.S. Army Forces Command at Fort McPherson, Ga.

Peterson is currently commander of the Civilian Police Assistance Training Team in Iraq, in charge of rebuilding the Iraqi police force.