Mixing fighting and food in Afghanistan 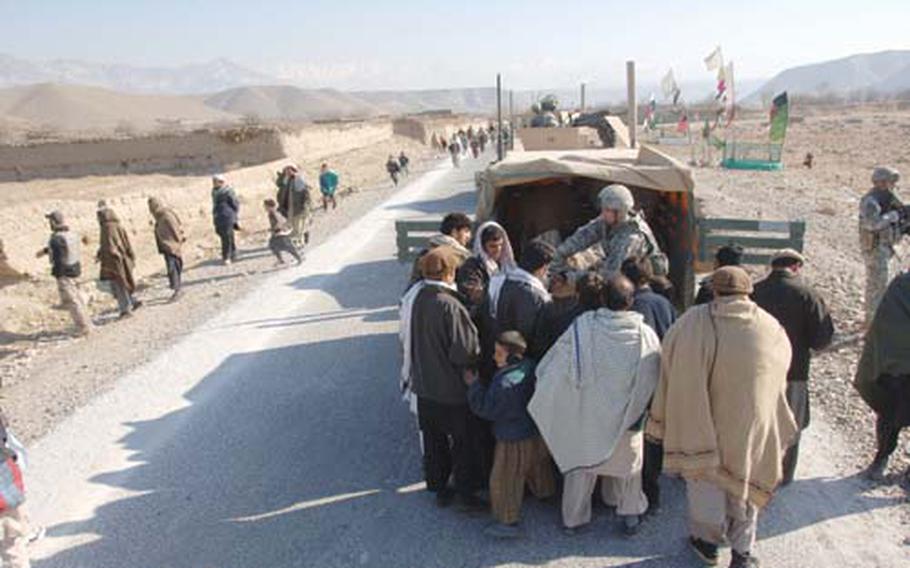 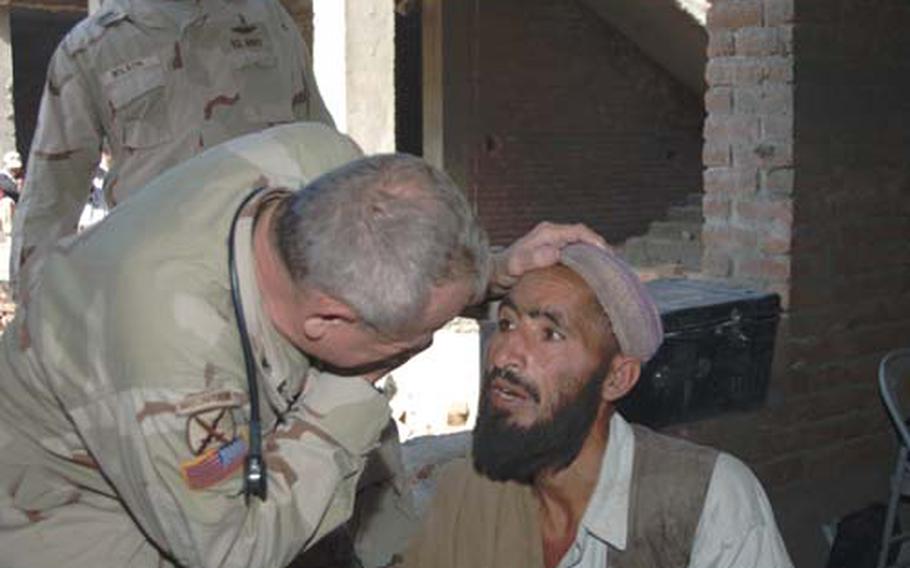 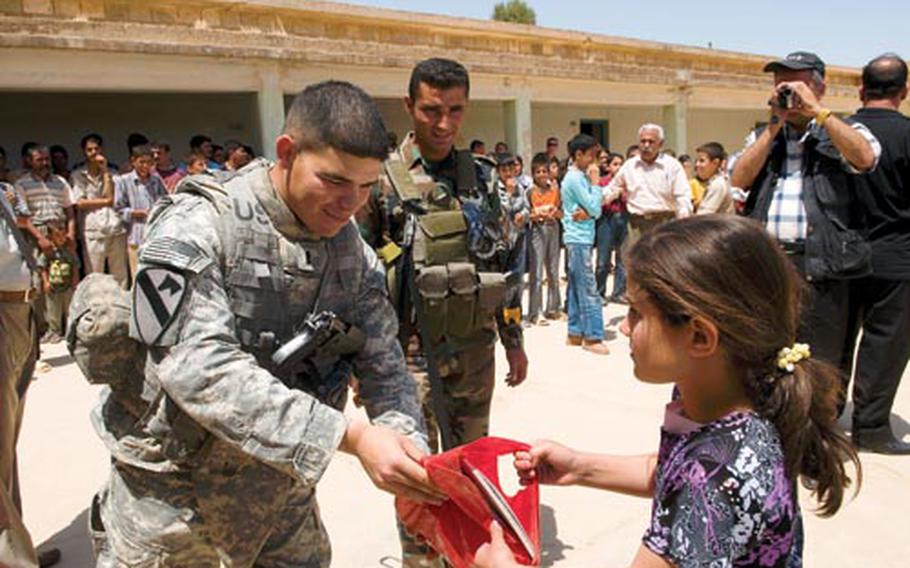 Army 1st Lt. Jacob Lopez gives a bag with school supplies to a girl in the village of Tubazawa, Iraq, on May 14. (Gustavo Olgiati/Courtesy of the U.S. Army)

It was a textbook example of the Obama administration&#8217;s new "whole of government" strategy for the U.S. military to advance the war in Afghanistan: Kill Taliban insurgents while simultaneously helping Afghan civilians.

Yet there is something inherently wrong with that approach, according to international humanitarian aid and development organizations. Mixing fighting and food distribution, they say, is a recipe for disaster.

The problem, pillar organizations of the global aid community maintain, is that U.S. counterinsurgency strategy places aid directly in the hands of the U.S. military, which is instructed to flush insurgents from among civilian populations and then work &#8212; often alongside aid workers, the State Department and other agencies &#8212; to quickly provide emergency needs such as water, food and medicine and establish services such as sewage treatment, garbage collection and schools.

"It&#8217;s not that there shouldn&#8217;t be more emphasis put on the state-building and rebuilding, but it should not be done as part of the combat team. It should be done separately," said Stephen Cornish, director of bilateral programs at CARE Canada.

Aid and development workers say their fiercely protected neutrality is jeopardized when foreign militaries deliver aid intending to fulfill strategic, rather than purely humanitarian, objectives. Insurgents such as the Taliban then have even less incentive to distinguish between combatants and caregivers.

"The days are gone when driving in a white jeep with a humanitarian logo was a guarantee of safety," said Jonathan Mitchell, the emergency response director for CARE International, in a statement released last month. "Today aid has become a target."

CARE&#8217;s aid operations in Afghanistan have been attacked and threatened for mere suspicion of collaboration with American forces, Cornish said.

When Defense Secretary Robert Gates toured Camp Lejeune in North Carolina in April, he was asked by reporters whether he was concerned about expecting Marines to be war-fighters and aid dispensers at the same time.

"No," he said. "In fact, one of the messages that I had for the Marines when I had the opportunity to talk to a group of them is the importance of making sure that the Afghan people know that we are there as their friends and their allies, and that we are there to help make their lives better as well as to protect ourselves and them from the Taliban and these other extremist groups."

That is a significant reversal of the military&#8217;s mission at the onset of war, when then-Defense Secretary Donald Rumsfeld warned of the "unintended adverse side effects" of long-term nation-building in Afghanistan.

"The objective [in Afghanistan] is not to engage in what some call nation-building [where] well-intentioned foreigners arrive on the scene, look at the problems and say let&#8217;s fix it," Rumsfeld said in a 2003 address delivered from the deck of the USS Intrepid in New York, knowing an invasion of Iraq was likely and seeking to assuage critics worried about U.S. overreach. "This is well motivated to be sure, but it can really be a disservice in some instances."

It wasn&#8217;t long, however, before circumstances on the ground in Iraq started to erode the official aversion to nation-building.

In August 2003, a bomb exploded outside of the United Nations compound in Baghdad, killing Sergio Vieira de Mello, the U.N. special representative to Baghdad and a respected human rights leader.

That event left a humanitarian void that the military was compelled to fill, according to Gen. David H. Petraeus, head of U.S. Central Command.

"The majority of [international aid groups] shut down their organizations or moved them to the Kurdish region or neighboring countries when the UN compound was blown up in 2003," Petraeus wrote in an e-mail to Stars and Stripes.

"Following that, there were very few organizations with the kind of capability and capacity needed to address the needs in Iraq."

Provincial reconstruction teams became one preferred solution. The teams, which combine personnel from the military, the State Department and other agencies and work with humanitarian nongovernmental organizations, already were operating in Afghanistan and so were introduced into Iraq.

Over time, the military became so involved in aid and development projects that the strategy was written into the highly regarded 2006 Counterinsurgency Field Manual, otherwise known as the Petraeus Doctrine.

The doctrine continues: "[Commanders] must ensure that their soldiers and Marines are ready to be greeted with either a handshake or a hand grenade."

But aid groups criticized the provincial reconstruction teams almost immediately for blurring the historical distinction between warfighters and aid deliverers. By 2007, the U.S. Institute of Peace, the Pentagon and a coalition of NGOs released a guidebook for military-NGO relations outlining strict separations between the groups, from where they work to what they wear. The military should not even refer to humanitarian groups as "partners," it said.

This spring, the Obama administration revealed its "whole of government" strategy, cementing the counterinsurgency policy in the new White House and bolstering it with an increased commitment to nonmilitary resources.

President Barack Obama&#8217;s national security adviser, retired Gen. James Jones, in March, told reporters, "As the president said, a campaign against extremism will not succeed with bullets or bombs alone."

Military leaders now speak of the strategy with unwavering confidence.

"Obviously, humanitarian aid is a key factor in any population-centric operation." said Maj. Gen. Michael Tucker, deputy chief of staff for operations of the International Security Assistance Force and deputy commander for operations for U.S. Forces Afghanistan. "They both work hand in hand. One sets the condition for the other. And it&#8217;s absolutely essential to progress in counterinsurgency operations."

But a dozen leading humanitarian organizations released a report last spring sharply criticizing the U.S. and NATO for what they called the "militarization" of aid.

"Military forces should clearly distinguish themselves" from civilian groups, the document said, and "should not use relief or development activities to attempt to win people&#8217;s hearts and minds for tactical, counter-insurgency or other military objectives."

It was signed by giants of global aid, including CARE, Catholic Relief Services, Save the Children, Oxfam Great Britain and the International Rescue Committee.

But with a "counterinsurgency umbrella" now placed over humanitarian aid, he said, a well-intended strategy has effectively demolished that time-honored right.

NGOs still willingly rely on militaries to move large quantities of lifesaving aid into zones with devastated infrastructures, such as during the 2004 Indian Ocean tsunami or last year&#8217;s earthquake in Pakistan.

"Those were circumstances in which nobody but the military could help to deliver the humanitarian assistance as rapidly and in as large a quantity as it needed to be delivered," said Lisa Kuennen-Asfaw, director of Catholic Relief Services&#8217; Public Resource Group.

Her organization has accepted military escorts into danger zones, but also has refused to work with U.S. forces when security was the main objective.

"When we&#8217;ve been asked to achieve a military or security objective with resources, we don&#8217;t take the funding," said Kuennen-Asfaw. "They call them humanitarian and medical missions, but then they make reference to us as a &#8216;strategic partner&#8217; in advancing U.S. national security interests, and we&#8217;re not. We are there for development and humanitarian assistance purposes."

Sarah Lischer, a political scientist at Wake Forest University in North Carolina who has studied the mix of humanitarian and military operations, said trained humanitarian workers enter impoverished areas looking for specific at-risk populations such as nursing mothers and vulnerable children. Military leaders, however, look for village elders in order to sway allegiances.

"What they deliver is based on a whole different category of need," said Lischer.

Aid groups have attempted to work out mutually agreeable rules for aid delivery. Last year, NATO&#8217;s International Security Assistance Force signed such an agreement with the U.N. and more than 100 NGOs intended to delineate the clear distinction between civilian aid activities and the military&#8217;s fight against insurgents and terrorists.

But a spokeswoman said U.S. forces under Operation Enduring Freedom did not sign on to the document.

And neither, of course, did the Taliban.

"We have no idea about these guidelines and were never part of the process which produced them," a Taliban spokesman told a U.N. news service. "We only respect truly neutral and independent aid organizations which do not work at the behest of American and Western forces."