Beate and Michael Schleich stand on the front stairs to their house in Erlensee, Germany. The couple says U.S. Army helicopters from Fliegerhorst Casern would fly low enough in the space between their house and the one next door, that they could see pilots. (Michael Abrams / S&S)

Beate and Michael Schleich stand on the front stairs to their house in Erlensee, Germany. The couple says U.S. Army helicopters from Fliegerhorst Casern would fly low enough in the space between their house and the one next door, that they could see pilots. (Michael Abrams / S&S) 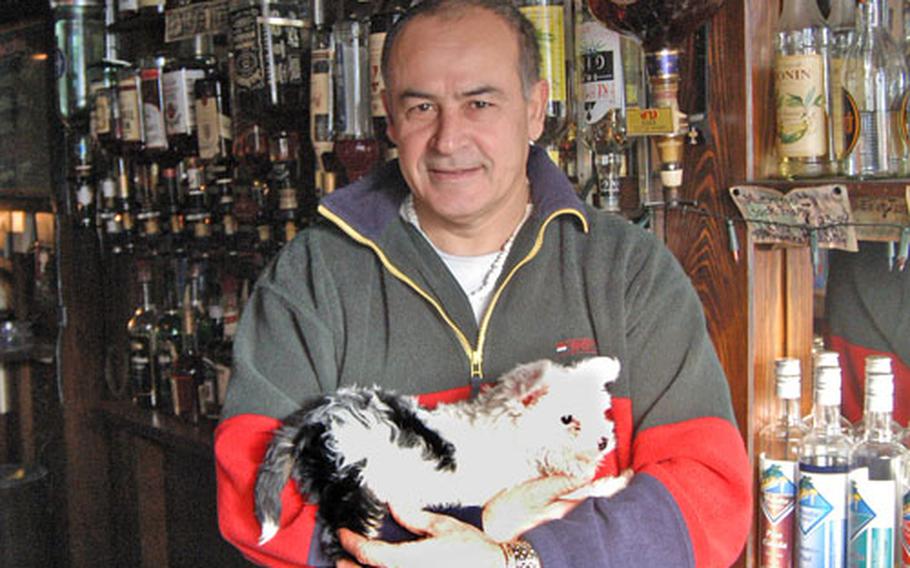 Henri Erez owns “Cheers,” a tavern across from the U.S. Army base and housing area in Babenhausen, Germany. A good chunk of the troops stationed in Babenhausen will be leaving due to Army transformation. (Michael Abrams / S&S)

BABENHAUSEN, Germany &#8212; The owner of the most popular watering hole in Babenhausen has already attended two weddings this year.

&#8220;The customers are 90 percent Americans, 10 percent German girls,&#8221; said Henri Erez, the proprietor of Cheers, a bar located across the street from Babenhausen Casern.

That sense of closeness to the American community took a shot with Thursday&#8217;s announcement by U.S. Army Europe that a battalion and two batteries would vacate Babenhausen, effectively pulling the plug on this picturesque casern.

The news caught Erez off guard. He figures it can&#8217;t be good for his business, or, for that matter, the local economy.

Due north, near the city of Hanau, residents of Erlensee were hitting a different note now that the Army has formally stated its intention to pull helicopter aviation units out of Fliegerhorst Casern.

Unit changes, shifts and inactivations, especially of this magnitude, often elicit varying responses from the local populace. The recent announcement didn&#8217;t address base closures &#8212; that falls under the purview of the Defense Department &#8212; but the future of some installations, such as Fliegerhorst and Babenhausen, certainly doesn&#8217;t look promising.

For decades, residents of Erlensee and two other towns have complained, sometimes bitterly, about the level of noise emanating from the airfield, which dates back to 1937 and Hermann G&#246;ring&#8217;s Luftwaffe.

Even though it has fewer helicopters, Fliegerhorst remains a sore subject with some locals, especially those who live near take-off and landing routes. Beate Schleich said helicopters sometimes fly so low they&#8217;ll blow a newspaper off a patio table.

Nights won&#8217;t be the same around Babenhausen once the 1st Battalion, 27th Field Artillery Regiment and two batteries of the 5-7 Air Defense Artillery Battalion leave town. Also on the list is the 71st Ordnance Battalion. In all, about 565 soldiers are facing their last call at &#8220;Cheers.&#8221;

Given the troop reduction at Babenhausen Casern, &#8220;is there going to be enough people here to support it?&#8221; wondered Spc. Jeremy Cotton, a member of 1-27.

Erez, the bar owner, isn&#8217;t happy about the news. Thirteen years ago he sold his bar in Wertheim when U.S. forces left. He moved to Babenhausen, bought the Road House, changed the bar&#8217;s name to Cheers and has been serving troops ever since.