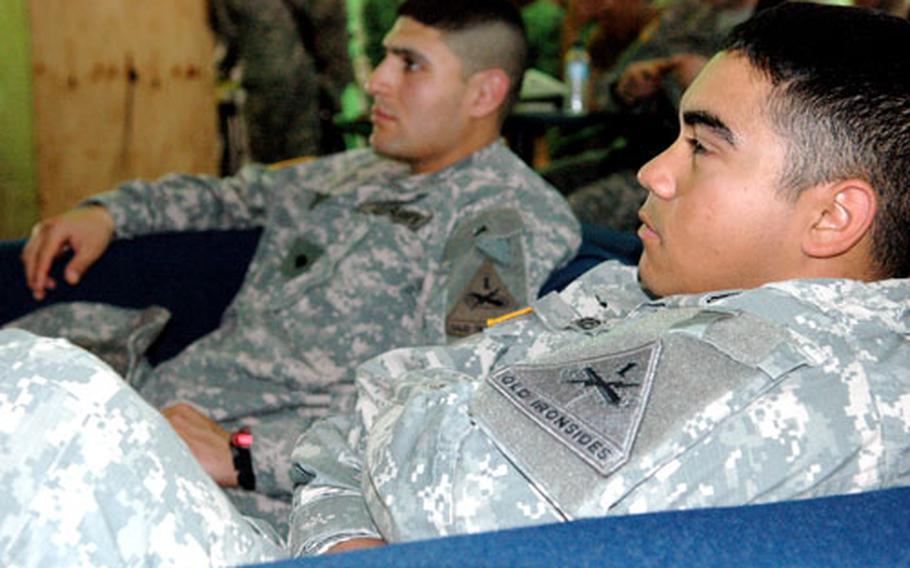 Spc. Juan Perez, 22, right, watching a movie, said he is frustrated that his unit, with the 1st Armored Division’s 2nd Brigade, is staying in Kuwait. He said he would prefer to either go into Iraq or back to Baumholder, Germany. The other soldier was not identified. (Andrew Tilghman / S&S)

The 22-year-old medic from Louisiana got married six months ago and he said he has barely seen his wife since they took their vows. First he spent several months training to go to Iraq. Now, while she is back in Germany, he is in Kuwait, where the weeks pass by slowly and he said he feels idle and far from home.

&#8220;I refuse to re-enlist after this deployment,&#8221; Perez said after noting he has so far spent nine weeks at this desert camp about 10 miles south of the Iraqi border.

Perez&#8217;s reaction is just one of many here among the nearly 3,500 troops with the Baumholder, Germany-based 1st Armored Division&#8217;s 2nd Brigade. They spent months training to go to Iraq in November, only to learn they would remain in Kuwait with new instructions to stay south of the border, training and preparing to go north only in case of a crisis.

For many soldiers &#8212; more than a third of the unit has been to Iraq at least once &#8212; the change of plans brought mixed feelings.

&#8220;I wanted to go up there and make a difference,&#8221; said Maj. Andy Kelly, executive officer of the 4th Battalion, 27th Field Artillery. &#8220;But on the other side, the leadership side, if we stay here we are pretty much guaranteed to bring everyone home safe. And that is a relief.&#8221;

Formally, the 2nd Brigade has instructions to stay in Kuwait for an entire year. Some soldiers &#8212; particularly those who have been to Iraq once already &#8212; were less-than-eager to return. Dannial McKneely, 21, saw eight men from his company die in a massive car bomb during his first deployment.

Nevertheless, not going into Iraq was a huge disappointment for Matthew Vital, a scout with the Brigade Reconnaissance Troop.

Vital got into about five firefights during his first deployment, he said.

Lt. Col. Rich Anderson, the brigade&#8217;s executive officer, hopes all his troops understand that they are playing an important role while in Kuwait.

&#8220;I would tell them that no matter where they are, they are still making a significant contribution to the global war on terror,&#8221; Anderson said. &#8220;Sometimes it&#8217;s difficult to explain that to a soldier &#8212; they want to do and they want to see. But in the long term, they will see that they really did make a real contribution.&#8221;

Anderson and others see their revised mission as a fundamentally good development, a signal that Iraq is stabilizing and has less need for a heavy brigade of troops.

&#8220;I really felt it is a big blessing,&#8221; said Chief Warrant Officer Kenneth Hick, a food service adviser and a married father of two. Hick, who has been to Iraq twice during the past several years, said he sees a lot of younger soldiers who are eager to go north for naive reasons.

Spc. Jeremy Best said he is more than willing to go to Iraq, to stay in Kuwait or head home early. But it&#8217;s difficult to stay mentally ready for all three options.