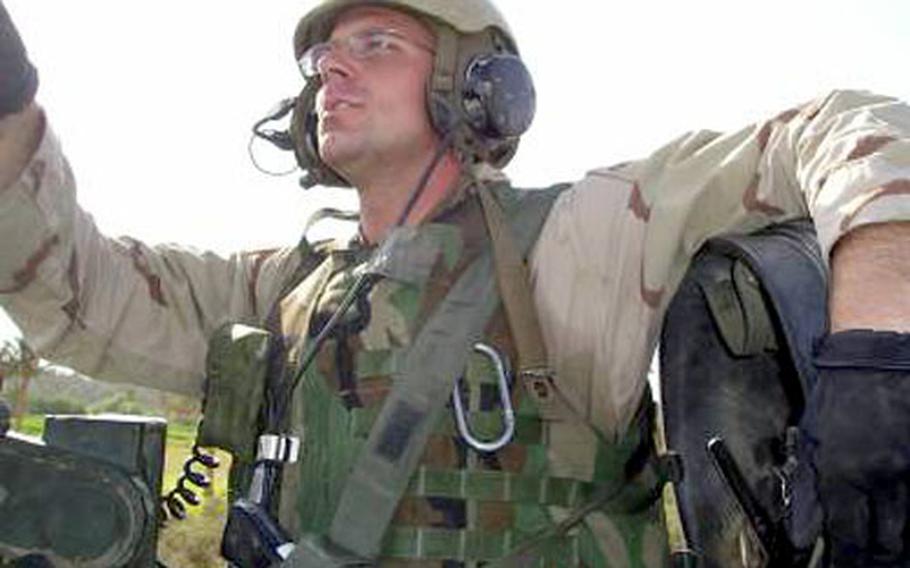 Army 1st Lt. Kenneth Ballard, pictured in 2004 in Iraq, was killed on May 30, 2004, in a friendly-fire incident. His family was initially told that Ballard was killed during a firefight with insurgents. (Courtesy of Karen Meredith)

Karen Meredith said it took five months to get her son&#8217;s personal belongings back. And more than a year after being informed of her son&#8217;s death, the Army told her that Ballard was killed in an accident, not by the enemy, as initially reported, she said.

The incident has sparked a review of how families are notified when their loved-ones are killed in Iraq and Afghanistan, an Army official said.

Secretary of the Army Francis J. Harvey, who spoke with Meredith two weeks ago, ordered the review to be completed Jan. 15, said Lt. Col. Thomas Collins, a spokesman for Harvey.

&#8220;If there is one case where a family did not get information accurately and quickly, there is a problem and we want to fix it,&#8221; Collins said.

Ballard &#8212; who was attached to the 2nd Battalion, 37th Armored Regiment, 1st Armored Division out of Friedburg, Germany &#8212; had been listed as a casualty of enemy fire, but Army officials announced last month that he was actually killed in a friendly fire accident after a combat mission.

Officials said the review was also prompted by the high-profile death of Army Cpl. Patrick Tillman, a former NFL player who was initially reported as killed by the enemy in Afghanistan, but whose death was subsequently reported as friendly fire.

In addition, Illinois Gov. Rod Blagojevich and Lt. Gov. Pat Quinn met Wednesday with Harvey to urge him to improve how the military works with families of those killed in the line of duty. Illinois families had complained to them about how the bodies of soldiers killed overseas are returned home.

Harvey feels it &#8220;personally&#8221; when talking to people about notification problems, Collins said

The Army&#8217;s casualty notification process has been praised by families of fallen troops, according to Gen. Vincent Brooks, of Army Public Affairs.

&#8220;It is a solemn obligation that we take very seriously,&#8221; Brooks said in an e-mail. But he thinks Harvey is rightfully unsatisfied with cases handled poorly.

&#8220;Thus his direction for a broad look to see if there is a procedural issue that can be addressed to improve the fulfillment of our promises to the families of our fallen warriors,&#8221; Brooks said.

Meredith said the Army could do much more to ease the pain of the tragedy for families of soldiers killed.

She said Army officials told her that they did not encourage her son to write a will, so after he died she had to go to probate court to claim his property. Also, the casualty officer assigned to her was deactivated two weeks after her son&#8217;s death and &#8220;abandoned&#8221; her, leaving her without a replacement, she said.

And the Army laundered all of Ballard&#8217;s personal belongings before returning them to the family, a seemingly innocent decision that she said was emotionally draining for her.

For mothers, Meredith said, being able to smell their children&#8217;s scent is important. But instead, &#8220;When I got his things I picked it up and smelled it, and it just smelled like laundry.&#8221;

Meredith said she has received a letter of apology from Harvey for the notification problems, and on Wednesday she learned the Army Inspector General&#8217;s Office is launching an investigation into what went wrong in her case.

&#8220;I hope that this investigation will allow them to understand where some of the processes can be improved,&#8221; she said.