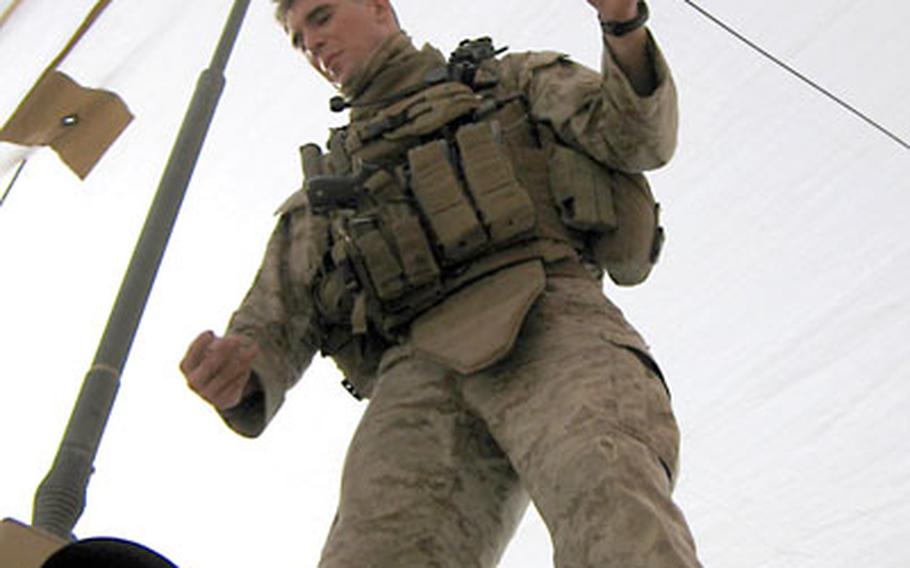 Cpl. Davis Avila, 22, a mechanic from California, prepares a mine resistant ambush protected vehicle at an Iraqi military compound near Camp Fallujah before a convoy to Halwas in Anbar province to participate in a vehicle patrol conducted by the Iraqi soldiers of 2nd Battalion, 2nd Quick Reaction Force. (Cindy Fisher / S&S)

They eat, play and sleep among the Iraqi soldiers they are here to advise. There are no dining facilities, military exchanges or other amenities available at most of the camps. Yet some say this has been the best experience of their careers.

A small unit like this creates strong bonds among the enlisted troops and officers, said Lance Cpl. Nathaniel Gillingham, 22, a radio operator from Lakeland, Fla.

It&#8217;s unusual for lance corporals to have daily interaction with majors and lieutenant colonels, but it happens here, said Lance Cpl. Daniel Nicholson, 20, an infantryman from Robindale Heights, Pa.

Gillingham and Nicholson, part of the 2nd Quick Reaction Force MiTT, are assigned to an Iraq camp near Camp Fallujah in Anbar province. The team is so small that everyone pitches in to do jobs usually done by junior Marines, such as man turret guns on convoys, Gillingham said.

"We work so closely together that we are all on the same page and can predict each others&#8217; actions," said Lance Cpl. Erik Tirado, 27, a machine gunner from Jacksonville, Fla., with the team advising reaction force&#8217;s 3rd Battalion.

"It is so much better than being in an infantry battalion," he said.

Junior Marines here do more too, the three agreed.

"It&#8217;s much better than a regular battalion as far as being a radio operator in the back-in-the shop scenario," Gillingham said. "Back in the shop, all you do is prepare the gear for others to go out on the convoys. Here I go out a lot and do and see things that only a grunt used to get to do."

Nicholson is his team&#8217;s intelligence chief, which is not the "run-of-the mill job" for an infantry lance corporal, he said.

The junior Marines have also taken on more responsibility such as being vehicle and convoy commanders even when higher-ranked personnel are on the convoys, Nicholson said.

Interaction with Iraqi soldiers has added to the experience.

The Iraqi soldiers are very interested in the Marines&#8217; lives, said Pfc. Zach Young, 21, an infantryman from Pittsburgh working with the 3rd Battalion&#8217;s advisory team. "They want to know where you are from, what your father does, are you married," Young said.

He said he was surprised at "how much they blamed the Iraqi government for all the problems in the country."

Talking to the Iraqi soldiers, "it gives you a sense of humbleness of what you have back home. They are oblivious to what they have and could have," Gillingham said.