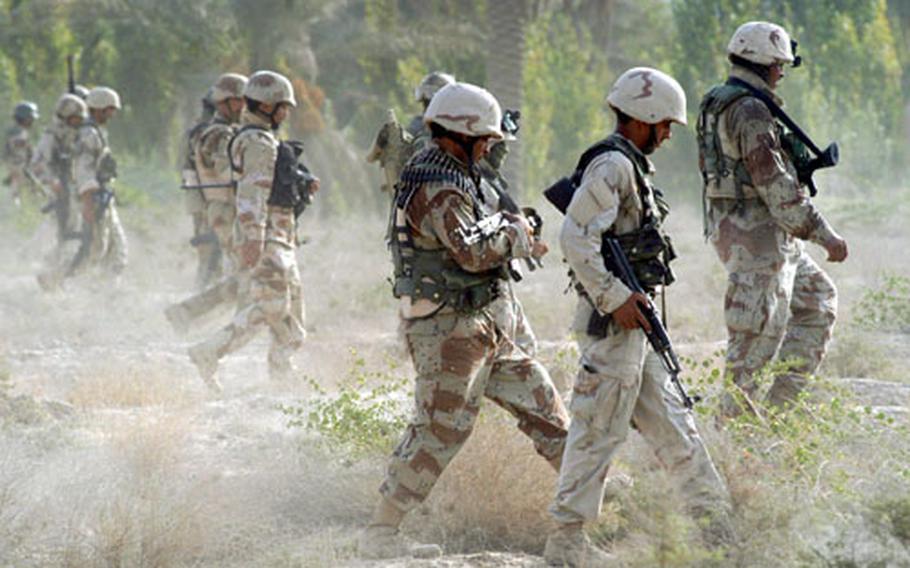 Soldiers with the 1st Brigade, 1st Iraqi Army Division, kick up dust as they search for weapon caches in a field during an Iraqi-led offensive north of Baqouba. (Sean Kimmons / S&S)

QUBBAH, Iraq &#8212; The battle-hardened Iraqi soldiers had the numbers and the experience, plus enough U.S. military support, to eliminate any safe haven used by al-Qaida in Iraq along the Diyala River Valley, northeast of Baqouba.

But in the first five days of an Iraqi-led mission to rid insurgents in the area, it seems that Sahwa fighters, a U.S.-funded "Sons of Iraq" civilian security force, had already chased them away.

So far, the only enemies Iraqi soldiers from 1st Brigade, 1st Iraqi Army Division, have faced are hidden explosives on roads and in thick palm groves. The threat is just as deadly as firefights, if not more.

On Friday, an Iraqi explosive ordnance disposal soldier tripped an explosive in a booby-trapped bunker, killing him and injuring two others. The brigade&#8217;s 1st Battalion alone reported about 25 bombs in the same area that day.

About 50 Marines are attached to MITT teams to provide the Iraqi brigade insight and air support capabilities. They patrol alongside the Iraqi soldiers in the sweltering sun and eat "malik," an Arabic rice dish with chicken in tomato soup, together.

Just as the Iraqis, the Marines go without creature comforts, sleeping outdoors with no bathroom or shower facilities while pushing forward.

Since 2005, the 1st Brigade, 1st Iraqi Army Division, also known as the "quick reaction force" brigade, has traveled cross-country to extinguish hot spots in Basra, Fallujah, Ramadi, Mosul and Baghdad. Four of its soldiers have been killed and 17 others wounded, mainly by bomb blasts, in the current Diyala offensive.

Marines have been working with the brigade since February.

More bombs on roads and in homes, and possible al-Qaida clashes, are expected as they head further into the valley, which is used by insurgents to move weapons and personnel under the concealment of palm groves.

Insurgents lurked in and around Qubbah town until residents created the Sahwa a few months ago.

Ibraheem estimates that insurgents killed almost 300 people in the 10,000-person town, and also blew up homes and schools. He said insurgents murdered two of his family members.

"It&#8217;s a lot better now," he said, adding that the town plans to move its all-Sunni Sahwa force into the Iraqi police.

"They provide us a lot of information," said Iraqi Lt. Col. Samir, commander of the brigade&#8217;s 3rd battalion.

Two Sahwa fighters rounded up 300 people on wanted lists and escorted them to Samir on Saturday.

"The Sahwa make it easier for us," he said of the fighters who only make $275 a month, compared to $600 a month for Iraqi soldiers.

Marines hinted that some Sahwa fighters in town may have fought against coalition forces at one time, perhaps for the anti-occupation 1920 Revolution Brigades.

Grouping villagers into one security force was better for all.

"It gives them a lot more authority to stand up against insurgents," Lammers said.

The brigade&#8217;s current clearing mission is slated to end this week. Its next move is up in the air. Further north in Kirkuk before the provincial elections later this year or early 2009 is one likely spot for the unit, which helped kill 10 insurgents and detain at least 40 suspects in Diyala since late July.

"We can&#8217;t have enough sleep and we&#8217;re always moving around," said a visibly exhausted Iraqi Brig. Gen. Adil Abbas, the brigade commander. "But, you know, we are soldiers."