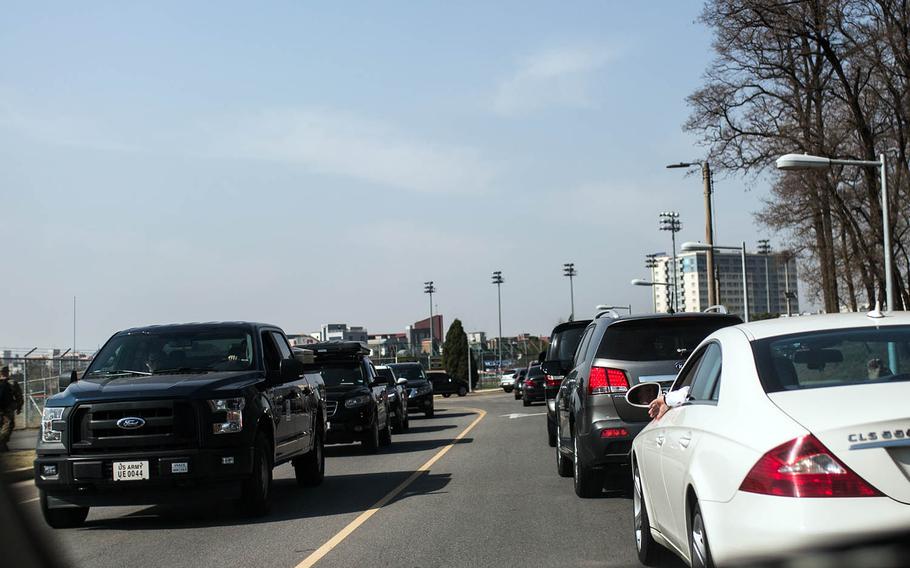 Buy Photo
Traffic backs up at Camp Humphreys, South Korea, after a false report that a vehicle ran one of the gates, Wednesday, April 18, 2018. (Marcus Fichtl/Stars and Stripes)

CAMP HUMPHREYS, South Korea — A car going the wrong way through a gate at Camp Humphreys prompted authorities to lock down the facility on Wednesday, but it was a false alarm, a spokesman said.

The driver was authorized to enter the installation, but turned around and drove the wrong way while trying to leave after dropping somebody off, garrison spokesman Bob McElroy said.

A servicemember in a military vehicle at the same gate “observed what appeared to be an unauthorized entry onto the installation through the gate,” McElroy said.

“The servicemember reported the incident and the garrison responded with enhanced security and access control gate closures,” he added.

A review of closed-circuit TV “determined it was not an unauthorized entry,” he said.

The investigation lasted nearly two hours from the time the servicemember reported the incident at about 2 p.m.

Traffic was backed up for at least a mile near the Anjeong-ri gate until the all-clear was given at about 3:40 p.m.

Authorities initially said the gates were closed “due to a gate runner” and asked people on base to “be on the lookout for a brown four-door Kia Spectra.”

The message, which was posted on Facebook, warned people not to approach the vehicle.

McElroy said the situation was handled with the proper precaution.

“If something unexpected happens we do what we can to resolve it quickly and safely,” he told. “It’s better to check on something and determine that there’s nothing to it than to just neglect something and it turns out worse.”

It was the latest security-related incident at the Army garrison, which has undergone a massive expansion in recent years.

A South Korean man was arrested in January after he drove through a gate and entered the installation. The base also was locked down Friday after a possible active shooter was reported, but authorities said later that was a false alarm.

A newly expanded Camp Humphreys, about 40 miles south of Seoul, is home to 8th Army headquarters and will eventually house the bulk of U.S. Forces Korea after a much-delayed project to relocate them from Seoul and other bases near the border with North Korea.

The United States has about 28,500 servicemembers along with family members and civilian contractors based in South Korea, which remains technically at war with the North after the 1950-53 conflict ended in an armistice instead of a peace treaty.