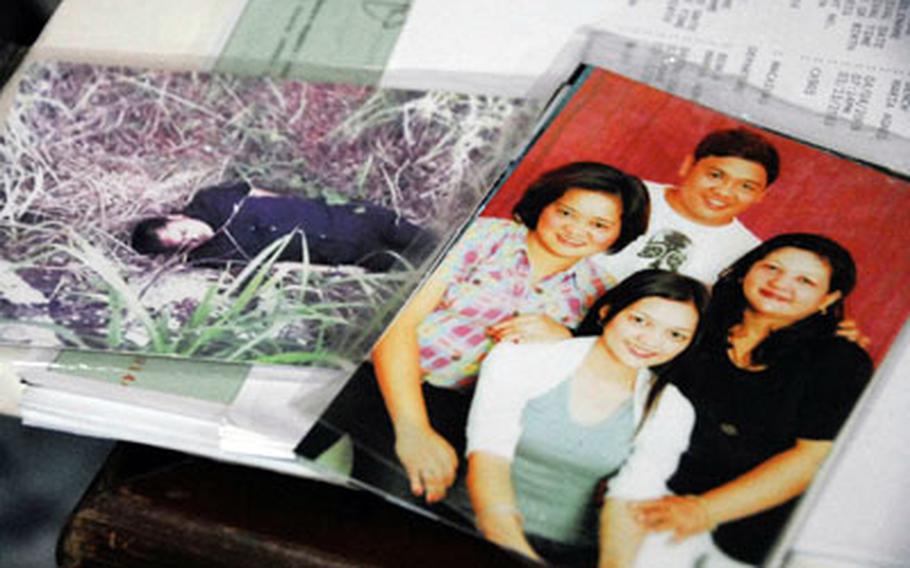 Buy Photo
Peter Turiano is pictured with members of his family, right, and in a photograph of the scene of his death in April. Turiano was killed in an armed robbery while driving the Bench family in the Philippines. (Travis J. Tritten/Stars and Stripes)

But on Aug. 30, just a week before he was to become command master chief of the U.S. Navy&#8217;s Command Task Force 76, Bench killed his son, bludgeoned his wife with a baseball bat and injured his daughter in their home on Sasebo Naval Base, Japan.

Then Bench fled on his motorcycle and veered into a bus on an expressway. He stood up and was struck and killed by an oncoming car.

That much of the violent story is public knowledge.

The rest, it turns out, is even darker.

The 39-year-old sailor with an impeccable service record was carrying on an illicit affair with a woman in the Philippines, the woman herself confirms.

Moreover, Bench appears to have plotted to have his wife, Agnes, killed on two separate trips to Manila earlier this year, according to the mistress. One of those aborted plots led to the death of a Filipino taxi driver, but records show that investigators from the Naval Criminal Investigative Service conducted only a cursory review of the incident.

And a source with knowledge of the investigation said other American sailors may have known about Bench&#8217;s adultery, which is a criminal offense under the Uniform Code of Military Justice, although it is not clear whether naval investigators are probing potential complicity among Bench&#8217;s comrades.

Stars and Stripes pieced together the back-story behind Bench&#8217;s violent late-August rampage from interviews in the Philippines, information gathered from sailors who knew Bench, e-mails the newspaper obtained that contain copies of NCIS reports and other sources.

Yet as of last week, no naval investigators had attempted to debrief Bench&#8217;s longtime Manila mistress, who possesses material information about the plots to kill Bench&#8217;s wife.

NCIS officials refused to comment on their investigation of Bench and his connections in the Philippines.

But Eniceo, 31, said she fell in love with Bench, a handsome sailor who lavished her with money and promises, after meeting him on the social networking site MySpace in 2007.

In an interview with Stars and Stripes at her Manila home in mid-September, Eniceo said Bench stayed with her several times at an apartment in the Antipolo City section of the city whenever his ship, the USS Denver, visited the Philippines. And Bench sent her support money each month via Western Union wire transfers, Eniceo said.

In between, there was e-mail. On her computer, Eniceo has more than 1,000 messages sent to her from Bench&#8217;s Navy e-mail account.

But the relationship turned sinister early on.

About three months after they met, Eniceo said, Bench began to talk about killing Agnes Bench, whom he always claimed was his ex-wife. Bench even showed her documents that he said were divorce papers.

Bench claimed that he was frustrated because he was about to retire from the Navy and his &#8220;ex-wife&#8221; would take nearly all of his $2,000 monthly retirement pay as alimony, according to one 2008 e-mail Bench wrote from his Navy account to Eniceo. Eniceo allowed Stars and Stripes to read some of the e-mail traffic between them but declined to share copies.

In that 2008 message, Bench claimed to have had a troubled childhood and said that the problems with his ex-wife were so great that he often thought of committing suicide by riding his motorcycle off a &#8220;beautiful&#8221; bridge near where he lived in Sasebo. He had threatened suicide twice during their affair, Eniceo said.

Bench planned to solve his problems by bringing his wife, a Filipina herself, to the Philippines, where he intended to hire hit men to kill her, Eniceo said. Once Agnes Bench was dead, Eniceo said Bench told her, the couple could live together and even use the insurance money from her death.

Bench gave Eniceo 100,000 Philippine pesos &#8212; more than $2,000 &#8212; and instructed her to deposit the money into an anonymous bank account via an ATM, she said. The money was an upfront payment for the murder of Agnes Bench, who was supposed to be killed during a ride to the airport in the Philippines, Eniceo said.

Last February, Agnes Bench traveled to the Philippines with her daughter to close on a land deal that turned out to be fraudulent, according to her family.

But despite the payment, the plot was not carried out, Eniceo said.

In April, Bench again hired a hit man to kill his wife, this time during a family Easter vacation to the Philippines, Eniceo said.

On the morning of April 6, taxi driver Peter Turiano picked up the Bench family &#8212; John, Agnes, son Anthony and daughter Angelika &#8212; from their hotel at the upscale Ortigas Center. It was Easter Holy Week, and John had suggested that the family cap their vacation with a tour of the city, Agnes Bench would later tell naval investigators.

&#8220;My husband was there before and knew about the beautiful view and we decided to visit the area and have lunch there,&#8221; she said in her statement. &#8220;We had traveled several times to Manila over the past 10 to 15 years and always felt safe in the Philippines.&#8221;

But shortly after Turiano and the family left a restaurant, an armed man waiting at an intersection pushed his way into Turiano&#8217;s van through John Bench&#8217;s unlocked passenger door, NCIS Special Agent Joshua Flowers wrote in an April 10 report from the U.S. Embassy in Manila. The report was supplied by sailors who served with Bench.

The gunman drove the van back down the highway while talking on his cell phone, according to Agnes Bench&#8217;s statement. John Bench was sitting in the front seat beside the gunman and she and the children were in the rear seat, she said.

Agnes Bench said she managed to grab the gunman&#8217;s arm but he was able to reach the gun. The van came to a sudden halt.

&#8220;We were fighting for the gun, which was pointed at my head, and I tried to make it point at the ceiling,&#8221; she said, adding that she called for her husband to help.

The gunman panicked, jumped from the van and fled on a motorcycle, according to the NCIS report.

Peter Turiano was dressed in his black work uniform when his body was found. The 41-year-old taxi driver had been shot in the head.

Cpl. Rodel A. Druja pulled a folder from the back of an old file cabinet at the Antipolo City precinct of the Philippine National Police a few weeks ago. Inside was a one-and-a-half page report detailing the murder of Peter Turiano and the robbery of the Bench family.

The report, stamped April 6, says the incident is still under investigation. But Druja, a detective on the case, said there were no fresh leads in the hunt for the gunman and the case had gone cold.

At the time, the Turiano murder apparently raised some skepticism at the NCIS office in Manila, which said the details of the case were growing &#8220;fancier by the minute,&#8221; but the agency initially only filed a brief incident report, according to an e-mail written on April 10 by Special Agent Flowers, which accompanied the incident report.

The Bench family left Manila on the first available flight three days after the attack and asked for no assistance from U.S. authorities, Flowers wrote.

To Turiano&#8217;s family, however, the incident was not merely unfortunate but also highly suspicious.

Not long after the murder, the Turiano family appealed to the U.S. Embassy, asking for new sworn statements from John and Agnes Bench.

&#8220;Mr. Turiano&#8217;s family are naturally disheartened by the turn of events, most especially when the investigation seems to center on the robbery committed against the Bench family when they ... were the ones who suffered the greatest loss,&#8221; Leila M. DeLima, chairwoman of the Commission on Human Rights of the Philippines, wrote to U.S. Ambassador Kristie Kenney on April 13.

The request yielded new statements from the Benches taken by NCIS in Japan on April 17. But the new information only raised more questions for the Turianos.

The 17-year-old knew that her parents, John and Agnes Bench, had returned to their home on Sasebo Naval Base after a lunch date on Sunday afternoon, Aug. 30. But when she approached the stairs, she discovered a terrifying scene.

John Bench was standing at the top of the stairs holding a baseball bat. Agnes Bench was lying on the floor, calling for help, Angelika later told investigators.

The teenager said she grabbed at the bat and her father hit her on the head, cutting her. Her mother told her to run for help. She staggered, crying and bleeding, to a neighbor&#8217;s door.

When emergency responders arrived, Agnes Bench was rushed to a local hospital with massive blunt-force trauma to the head. For days, she lingered near death, although family members say her condition has since improved.

Angelika was taken to the base clinic by authorities to have her head injury treated.

Meanwhile, John Bench had fled and was speeding down a local expressway on his Harley-Davidson motorcycle.

At 2:53 p.m., he crossed the expressway median and collided with a bus, according to Japanese police. But Bench survived that crash. He stood up and was struck by a car, NCIS reported.

Bench was pronounced dead at 4:09 p.m. at Sogo Hospital in Sasebo.

Still, no one knew the whereabouts of 12-year-old Anthony Bench.

Angelika told the authorities he was at baseball practice at nearby Nimitz Park, but he wasn&#8217;t there.

Family, friends and base security officers scoured the area for the boy.

His remains were discovered hours later, wrapped in plastic and hidden in a closet in the family home, naval investigators reported.