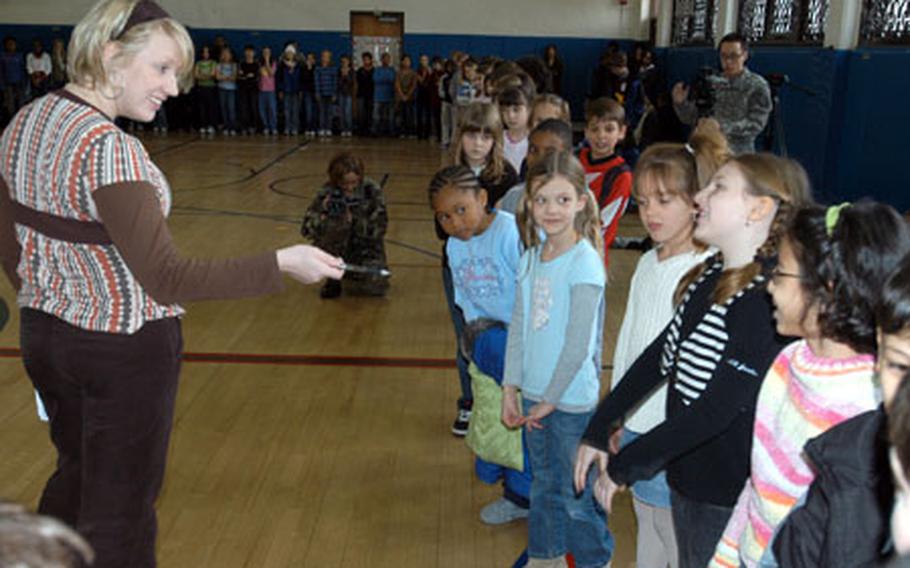 Corey Roberts, a tour actor/director with the Missoula Children&#39;s Theater, walks down a line of auditioning children as they give their names and ages during auditions for the play "Rumpelstiltskin" at Seoul American Elementary School on Monday. (Jimmy Norris / S&S)

It wasn&#8217;t mass indecision, it was just part of what more than 130 youths in the Seoul American Elementary School gymnasium were asked to do Monday during auditions for the Missoula Children&#8217;s Theater production of &#8220;Rumpelstiltskin.&#8221;

While ice cream had little to do with &#8220;Rumpelstiltskin,&#8221; there was a method to the madness, said Corey Roberts, who with Petra Torma is an actor/director with the children&#8217;s theater group.

&#8220;We chose actors on the basis of enthusiasm, ability to follow directions and the ability to add their own interpretations to their lines,&#8221; Roberts said.

Among those chosen for the play&#8217;s larger roles were Monica Cho as Rumpelstiltskin, Eric Riehle as King Whatsat, Carrisa Fowerf as the jester, and Jason Burbon and Colin Casey as knights. Playing young and old versions of Clara, the peasant forced to spin straw into gold, are Jasmine Williams and Evie Baisden.

While those are the five largest roles, Roberts warned would-be playgoers not to look at those as leads.

Roberts, who has been producing plays for the Missoula Children&#8217;s Theater for more than two years, said directing children is in some ways easier than directing adults.

In addition to the play, Roberts and Torma also planned to hold workshops Wednesday and Thursday for Child and Youth Services (CYS) staff to teach them ways to add drama to their curriculum.

&#8220;This gives the children an opportunity to develop skills and confidence in public speaking, be in a live performance, showcase their talents and be part of a positive group,&#8221; said Eskeletha Dorsey, CYS school liaison officer.

&#8220;Rumpelstiltskin&#8221; will be the sixth play the Missoula Children&#8217;s Theater has produced for the Yongsan community. Performances are scheduled for Saturday at 2 p.m. and 7 p.m. at the Seoul American High School auditorium.