Mission of faith culminates in commission as chaplain 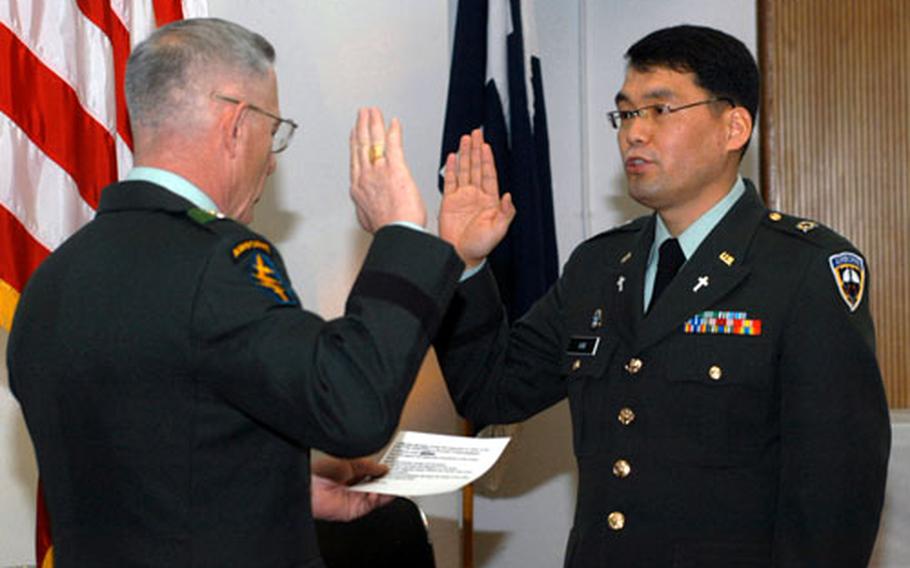 YONGSAN GARRISON, South Korea &#8212; U.S. soldier Eun-soo Kim traded his sergeant chevrons for lieutenant bars recently during a commissioning ceremony, one of the final steps toward his dream of becoming a military chaplain.

His journey began in 1999, when a woman in his father&#8217;s church prophesized Kim would be called upon by God to join the ministry.

During a December interview at the command chaplain&#8217;s office on Yongsan Garrison, Kim said the prediction shocked him at a time when he was questioning his own life.

&#8220;I wasn&#8217;t quite satisfied with my life,&#8221; he said of teaching English in South Korea. He had a bachelor&#8217;s degree in English from Hankuk University of Foreign Studies, but thought about studying to be a lawyer or certified public accountant.

His wife, Connie, is an American citizen and Kim decided to immigrate to the U.S. to join the Army in 2000, which would allow him to attend the seminary using his educational benefits and not put a financial hardship on his family.

After arriving at Fort Lewis, Wash., his first duty station, he applied to Faith Seminary in nearby Tacoma.

Shortly after, his unit, the 504th Military Police Battalion, was tapped for a tour of duty in Kosovo.

He said he felt crushed, not because he had any thoughts about avoiding his responsibility, but because he &#8220;had a dream to study."

He said he awoke an hour early each morning to pray before physical training.

&#8220;I asked God to give me the answer,&#8221; he said. About two weeks later, he was told that I Corps needed someone of his rank and job to stay at Fort Lewis instead of deploying.

He was accepted to the seminary in May 2001 and attacked the courses with determination, cranking out 72 credit hours &#8212; nearly two-thirds of the requirement for the Masters of Divinity program &#8212; on top of his normal daily job as a supply sergeant.

Before he could finish the program, he was called back to the 504th and deployed to Washington for Operation Noble Eagle.

While the 15-hour workdays were stressful, he said he was able to learn about the stress and ordeals soldiers undergo.

When his father was diagnosed with heart problems in 2003, Kim was given compassionate assignment orders and sent to work at K-16 Air Base, near Seoul.

He preached as an assistant pastor at his father&#8217;s church, visited members who had problems at home or were hospitalized, learned how the church administration works and finished his degree with Faith Seminary via distance education courses. He was honorably discharged in October 2004, but immediately joined the Army reserve and was assigned to Special Operations Command-Korea.

Howell said most soldiers don&#8217;t realize what it takes to become a chaplain, but Kim walked in the door with 99 percent of the boxes checked in the application form.

&#8220;I wanted to get him before someone else gobbled him up,&#8221; he said of Kim. Howell brought him straight to Col. Sam Boone, USFK and 8th Army command chaplain.

Boone said he knew Kim would be perfect for the &#8220;Finders Keepers&#8221; program, in which Kim would return to South Korea to work after finishing his training.

Howell worked closely with Kim to prepare the nomination package. When the word came back that he was accepted, Kim said, &#8220;I cried with joy.&#8221;

Before he left for training in South Carolina, his Special Forces Command conducted a brief commissioning ceremony.

1.You must obtain an official ecclesiastical endorsement from your denomination or faith group. This endorsement should certify that you are:

An ordained minister.Qualified spiritually, morally, intellectually and emotionally to serve as a chaplain in the Army.Sensitive to religious pluralism and able to provide for the free exercise of religion by all military personnel, their family members and civilians who work for the Army.2. Educationally, you must:

4. Be able to receive a favorable background check.

6. Be aged between 21 and 39 (age waivers may be granted based on years of prior service).