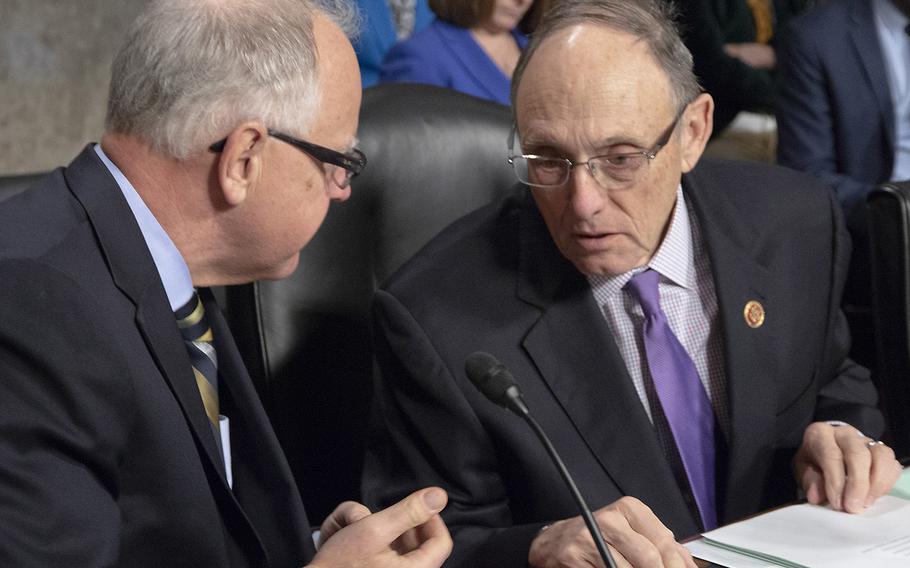 Buy Photo
House Committee on Veterans’ Affairs Chairman Rep. Phil Roe, R-Tenn., right, says VA "will receive the funding needed for implementation of the VA Mission Act while adhering to the existing and necessary caps on federal spending.” Ranking Member Rep. Tim Walz, D-Minn., says "By no means are we done with our work," noting that the Mission Act "still lacks a sustainable source of funding." (Stars and Stripes)

WASHINGTON – After a dispute delayed negotiations on the Department of Veterans Affairs budget for fiscal 2019, lawmakers came to an agreement Monday for more than $200 billion for the agency that includes funding for the new VA Mission Act – legislation that expands private-sector medical care for veterans.

The Office of Management and Budget estimated that implementing the Mission Act would create a $1.6 billion shortfall in 2019 in the account used to pay for veterans’ private-sector treatment. The Mission Act was signed into law with fanfare this summer, though President Donald Trump’s administration asked Congress not to break spending caps to pay for it.

In the end, lawmakers shifted $1.25 billion to cover some of the cost instead of approving new funding – a move some Democrats opposed.

Three veterans organizations came out Tuesday in approval of the plan, though they said Congress might have to appropriate more money for the Mission Act later if the VA hits a shortfall. During the past two years, the VA has been unable to estimate accurately the amount of money it requires to send veterans into the private sector.

“At the end of the day, the VFW wants Congress to do its job and ensure the VA has the money that it needs to properly implement the Mission Act,” said Carlos Fuentes, a director with the Veterans of Foreign Wars. “What can be seen from this bill, for at least 2019, is the VA has the resources to implement [it]. Our hope is that if the VA comes back and says they need more money, that Congress fulfills that need.”

“By no means are we done with our work,” said Walz, the ranking Democrat on the House Committee on Veterans’ Affairs. “The VA Mission Act still lacks a sustainable source of funding and unless something is done, the program will face a funding shortfall in less than a year.”

House and Senate negotiators released their agreement for the VA on Monday. In addition to the VA, the bill addresses spending for military construction, the Department of Energy, the legislative branch and other agencies. The House is set to vote on the bill this week, ahead of the new fiscal year, which begins Oct. 1.

The bill allots $208.8 billion for the VA altogether, a historically high budget for the agency.

The VFW, along with Disabled American Veterans and Paralyzed Veterans of America, lauded the bill in a joint statement as providing “much-needed increases for veterans’ health care and other critical programs, including new funding to begin implementing key provisions of the VA Mission Act.”

It provides $8.6 billion for mental health care programs, including $206 million for suicide prevention efforts. It directs $400 million to the VA’s Opioid Safety Initiative, $779 million to medical and prosthetic research and $1.8 billion to homeless veteran programs. Lawmakers set aside $2 billion to address a backlog of maintenance issues at VA facilities, as well as $1.1 billion for a massive project to overhaul the VA’s electronic health record system.

“Under this bipartisan agreement, VA is set to receive the largest dollar amount in history,” said Rep. Phil Roe, R-Tenn., chairman of the House Committee on Veterans’ Affairs. “Additionally, VA will receive the funding needed for implementation of the VA Mission Act while adhering to the existing and necessary caps on federal spending.”

Though they believe the VA will have the money in fiscal 2019 to implement the Mission Act, veterans groups remain worried about 2020. At that point, the new private-sector care program mandated by the Mission Act is supposed to be operational, and the VA will need even more money in its discretionary account to pay for it.

The legislation provides some advanced funding for the VA in fiscal 2020. However, the VFW, Disabled American Veterans and Paralyzed Veterans of America said it falls at least $8 billion short of what the VA estimated it will need for provisions under the Mission Act that year.

Democrats don’t want to see the money slashed from other domestic programs.

Fuentes said House Republicans have assured the VFW that they would address the issue before fiscal 2020.

“We’re going to make sure to hold them accountable if the time comes and they don’t do it,” he said. “[The Mission Act] was a significant victory for veterans. However, it’s not going to succeed if the VA doesn’t have the funding to properly implement it.”