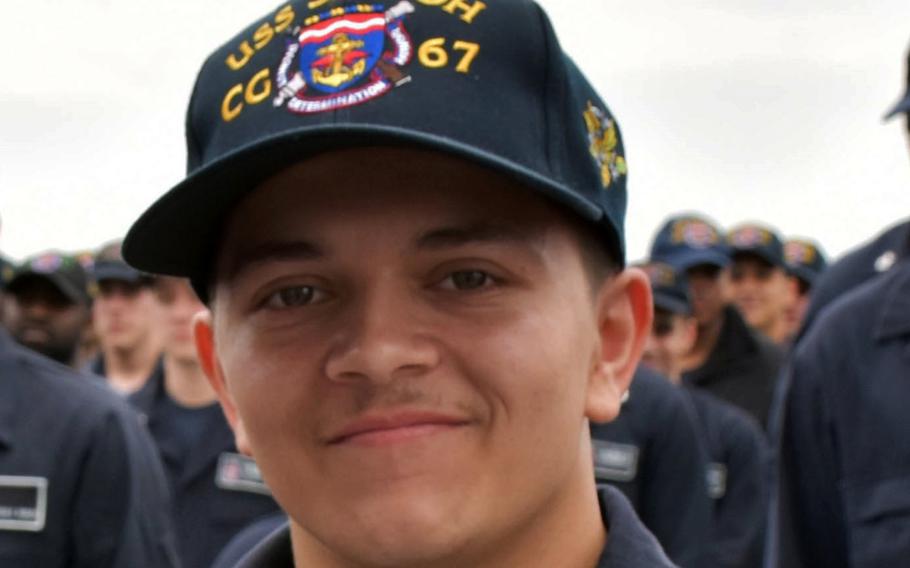 Peter Mims poses for a photo after being frocked to the rank of petty officer third class during a ceremony aboard the USS Shiloh May 25. (Courtesy photo)

A USS Shiloh sailor who was presumed to be lost at sea and hid in the ship's engine room for a week in June was found "covered in urine and feces, and had a camelback, a multi-tool, Peeps candy and an empty peanut butter jar with him," according to a Navy Times report.

Peter Mims, who was a gas turbine systems technician on the Yokosuka, Japan-based guided-missile cruiser, was the focus of a wide-ranging sea search after he was reported missing on June 8. U.S. and Japanese ships spent more than 50 hours searching for him, assisted by aircraft. He was assumed lost at sea, and the search was suspended June 11. The crew was planning a memorial service for him when he was found on June 15, the Navy said.

The Navy Times story drew on a Freedom of Information Act request for documents such as the command investigation and witness statements. The documents say Mims wanted to leave the Navy. They also outline some of the stressors in his life, including having filed for divorce, financial troubles and poor morale on the ship.

Other details include information from the investigation about statements Mims made about himself, including that "he could stop running engineering department engines by pulsating electricity with his body, that he could shoot fireballs out of his hands, that he had a friend who had a motorcycle with the same engine as the ship, that he had been to space, and that before the Navy he was going to work for NASA because he had reached the pinnacle of how strong a human could be.”