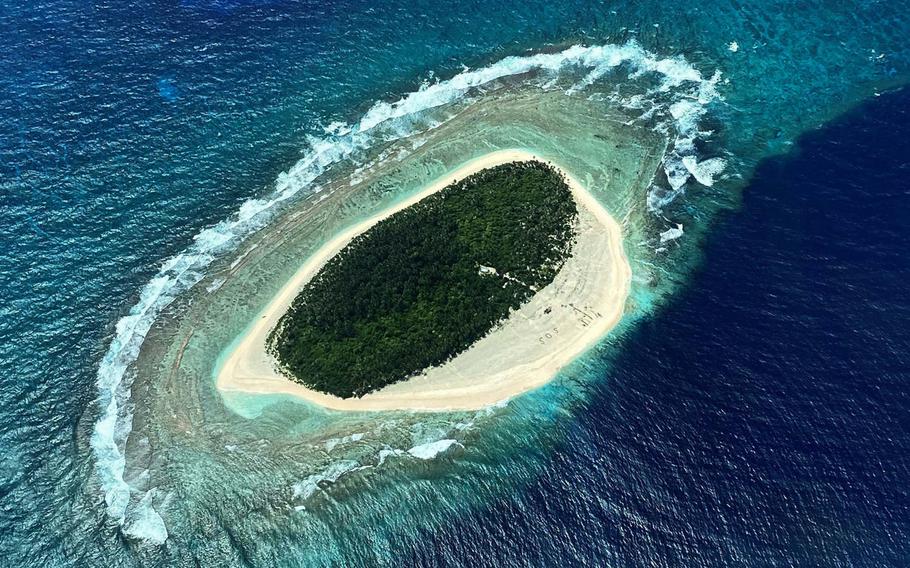 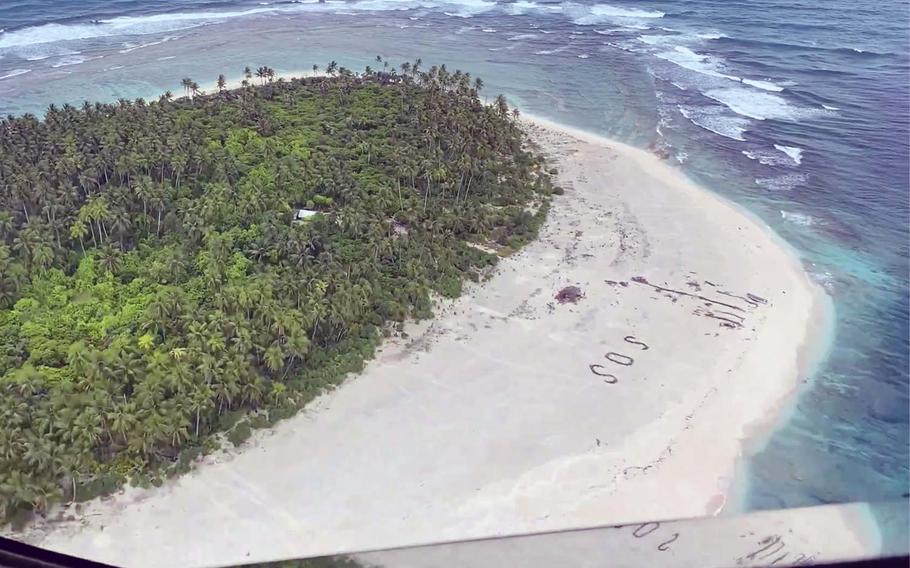 An SOS in the sand can be seen in this screenshot taken from a DVIDS video. Guardsmen locate three missing mariners on Pikelot Island during a search and rescue mission in the Federated States of Micronesia southwest of Guam, Aug. 2, 2020. (U.S. Air Force)

An Air Force KC-135 Stratotanker was near the end of its pattern, looking for a missing white and blue skiff and its crew in the western Pacific, when it turned to avoid rough weather and spotted a tiny island.

“That’s when we saw ‘SOS’ and a boat right next to it on the beach,” Lt. Col. Jason Palmeira-Yen, the cargo plane’s pilot with the Hawaii Air National Guard, said in an Air Force statement.

The plane was dispatched Sunday from Andersen Air Force Base in Guam with a crew of Hawaii and Pennsylvania Air National Guard members to search for three mariners who set out on what should have been about a 25-mile journey from one Micronesian atoll to another, but never arrived at their destination.

They apparently sailed off course and ran out of fuel — the uninhabited island where they were found is about 120 miles from their departure point — said the Australian military, which took part in the rescue along with the U.S. Coast Guard and Federated States of Micronesia.

The stranded sailors had set sail last Thursday, but when they failed to arrive more than a day later, a local notified Joint Rescue Sub-Center Guam that they were missing.

“This case highlights the importance of having a plan and making sure your family knows when you are expected to return,” said Capt. Christopher Chase, commander of Coast Guard Sector Guam.

Timely activation of the search and rescue system allowed for a quick response, Chase said in a Coast Guard statement. Watch personnel began coordinating with authorities throughout the region and seeking commercial vessels and others willing to help with the search.

Already in the region and steaming back to Australia, the Royal Australian amphibious assault ship HMAS Canberra diverted course and provided search sorties with its embarked helicopters, the Australian military said in a statement.

After sailing overnight to reach the area, the Canberra — also known as a landing helicopter dock — provided an MRH-90 Taipan helicopter and four attack helicopters that “were instrumental in the morning search,” said skipper Capt. Terry Morrison.

The U.S. Air Force crew was flying at 1,500 feet when it spotted the call for help written in the sand on the tiny island of Pikelot, the Air Force said. The coral islet is about 1,800 miles east of the Philippines in the Micronesian state of Yap.

“From there we called in the Australian Navy because they had two helicopters nearby that could assist and land on the island,” said Palmeira-Yen.

Australian military photos show an army Tiger attack helicopter on the beach. The crew brought the sailors food and water, confirmed their identities and checked for injuries, the Australians said.

A U.S. Coast Guard HC-130 Hercules from Air Station Barbers Point in Hawaii airdropped a radio and a message block, letting the sailors know that the patrol boat FSS Independence of the Federated States of Micronesia was coming to bring them home.

The Independence arrived at the island on Monday, launched a small boat crew and rescued the stranded mariners, the Coast Guard said. There were no reported injuries.

In 2016, U.S. Navy P-8A Poseidon patrol aircraft helped the Coast Guard locate several stranded sailors in two separate instances after they made “SOS” and “HELP” signs on the beaches of Micronesian islands.

Partnerships played a key role in the success of the latest mission, said Chase, the Coast Guard commander.

“Through coordination ... we were able to save three members of our community and bring them back home to their families.”