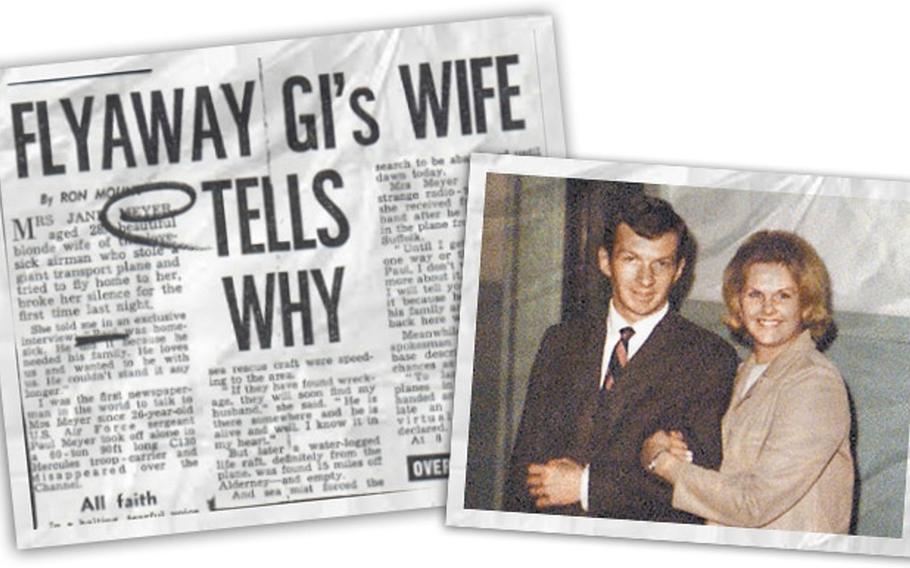 Air Force Sgt. Paul Meyer pictured with his wife, Jane, next to a newspaper clip from when Meyer stole a C-130 Hercules on May 23, 1969, so he could return home. (Courtesy Deeper Dorset)

Air Force Sgt. Paul Meyer pictured with his wife, Jane, next to a newspaper clip from when Meyer stole a C-130 Hercules on May 23, 1969, so he could return home. (Courtesy Deeper Dorset) 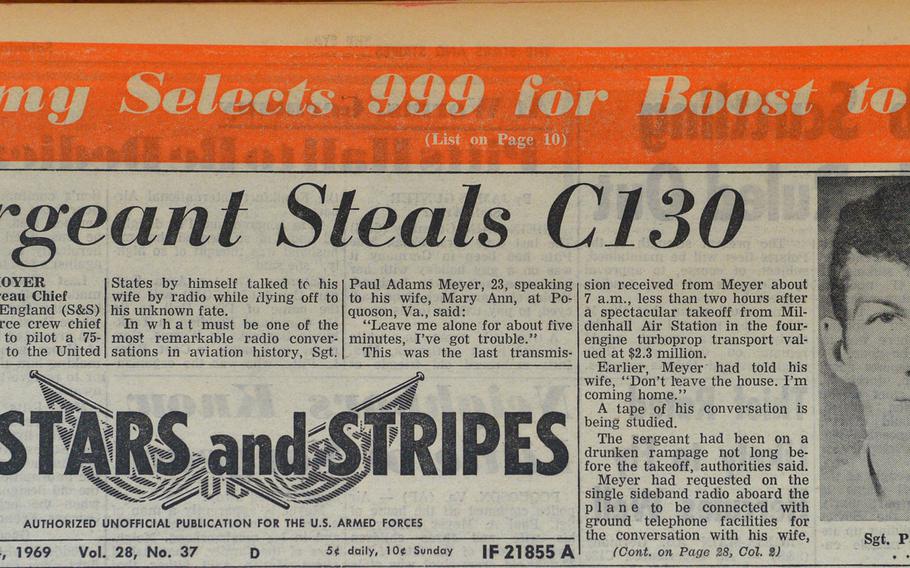 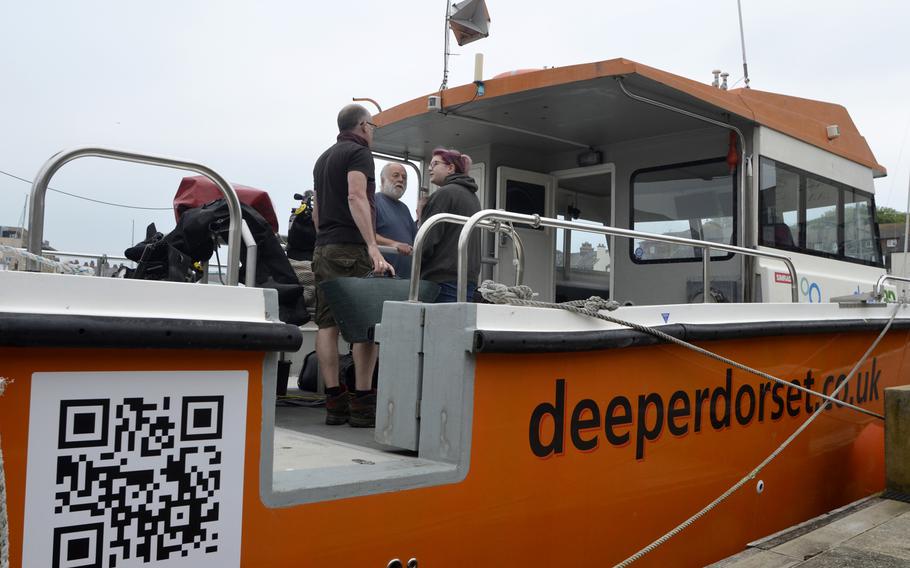 Buy Photo
Deeper Dorset founder Grahame Knott with diver Simon Brown and his daughter Emily aboard the RW Two, docked in Weymouth, England, May 24, 2018. Deeper Dorset is a small team of divers with more than 50 years of shared diving experience based in the south of England. (William Howard/Stars and Stripes) 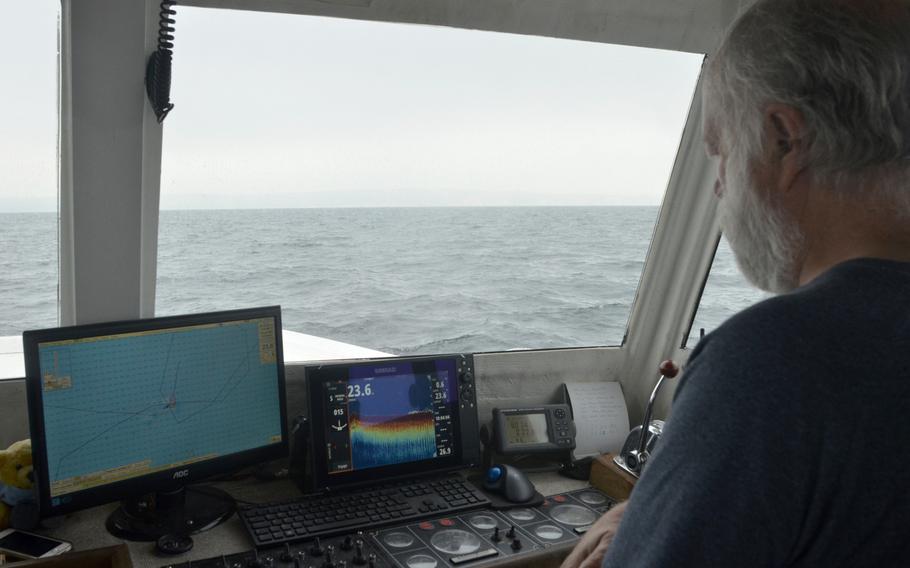 Buy Photo
Deeper Dorset founder Grahame Knott guides his boat the RW Two to underwater wreckage of a Republic P-47D Thunderbolt in Weymouth Bay, England, on May 24, 2018. His team has taken more than 1,100 photogrammetry images over several years to map the roughly 80-feet-deep crash site with debris scattered across 5800 square feet of seabed. (William Howard/Stars and Stripes) 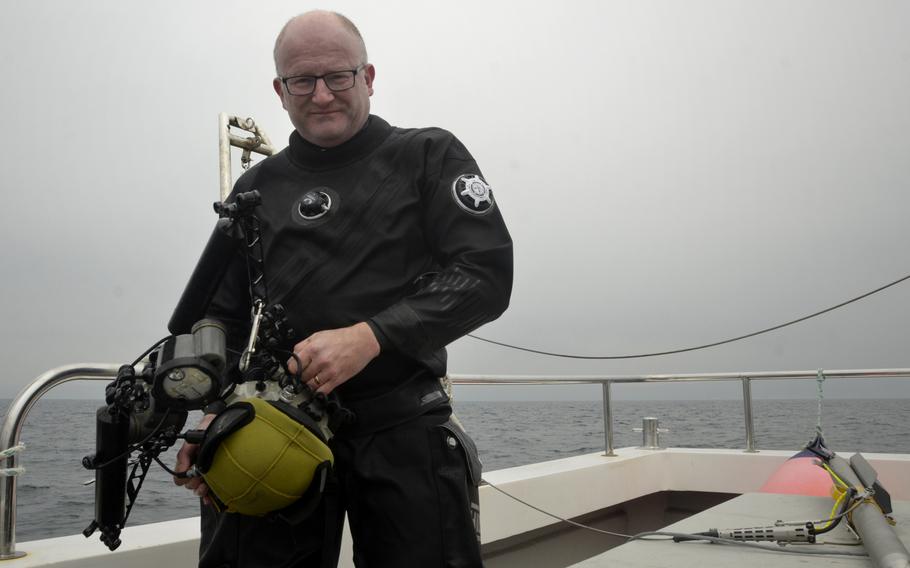 Buy Photo
Deeper Dorset diver, photographer and photogrammetry expert Simon Brown poses with his underwater camera after diving to survey a Republic P-47D Thunderbolt crash site in Weymouth Bay, England, May 24, 2018.''What you're looking for is really discrete things in the seabed,'' Brown said. (William Howard/Stars and Stripes)

The plane had been missing since May 23, 1969, when Sgt. Paul Meyer, a U.S. Air Force assistant crew chief stationed at RAF Mildenhall, got drunk, impersonated an officer and took off from the flight line in it one early morning, planning to fly back home to Virginia to see his wife. Not long after takeoff, the plane disappeared from radar.

“Leave me alone for about five minutes, I’ve got trouble,” Meyer said in his final transmission to his wife over the sideband radio.

He crashed into the English Channel near Alderney Island about two hours after starting the fateful flight. Some debris was recovered at the time but the homesick sergeant, who had been due to return home in a month but couldn’t wait, was never found.

Deeper Dorset began looking for the missing Hercules last April after a successful Kickstarter campaign raised about $8,000 for the effort. They had a November deadline to complete the search before weather conditions and tide would force them to stop.

On the last possible day of their search, team founder and boat skipper Grahame Knott says he likely located the C-130 after sonar had scanned a 10-square-mile area of seabed for 20 days.

“One large aircraft, not second world war vintage, in the right location can only be the thing we’re looking for,” Brown said. “It’s more than likely the missing Hercules.”

The team must wait for safer weather conditions before they can dive the site for a closer inspection, Brown said.

“We’re now waiting for probably from April time onwards to do the first dive,” Brown said. “We’ll take every opportunity we can this season to pay a visit until such point that we’ve exhausted the survey.”

Deeper Dorset plans to use underwater photogrammetry, which makes measurements using pictures, to build a model of the site for further study that may finally unveil the cause of Meyer’s crash.

“The family is absolutely delighted that we found it and is now hoping beyond hope that we can answer some more questions,” Brown said.