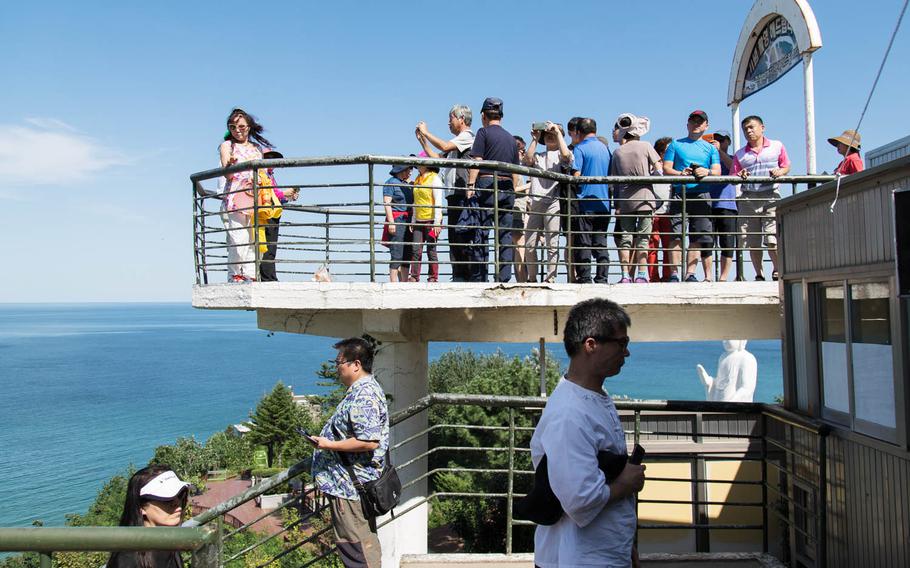 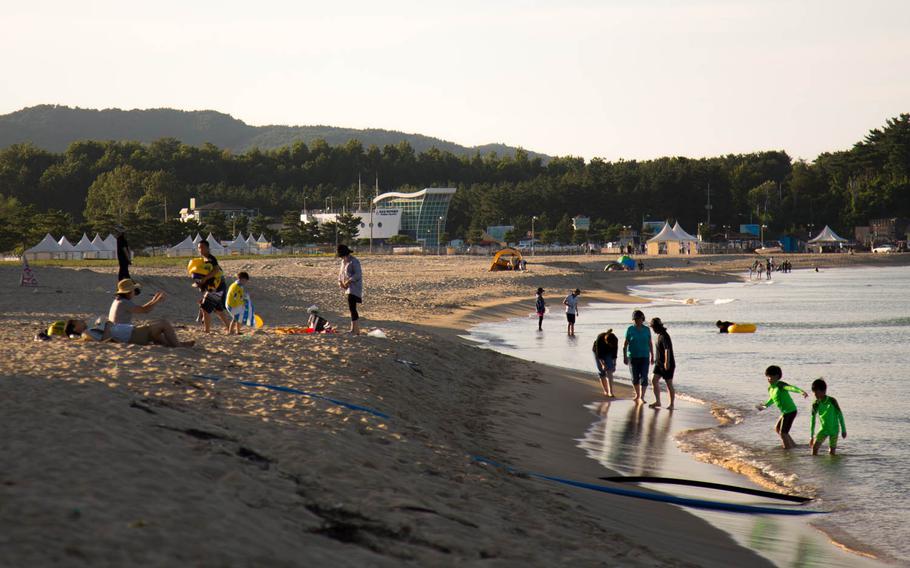 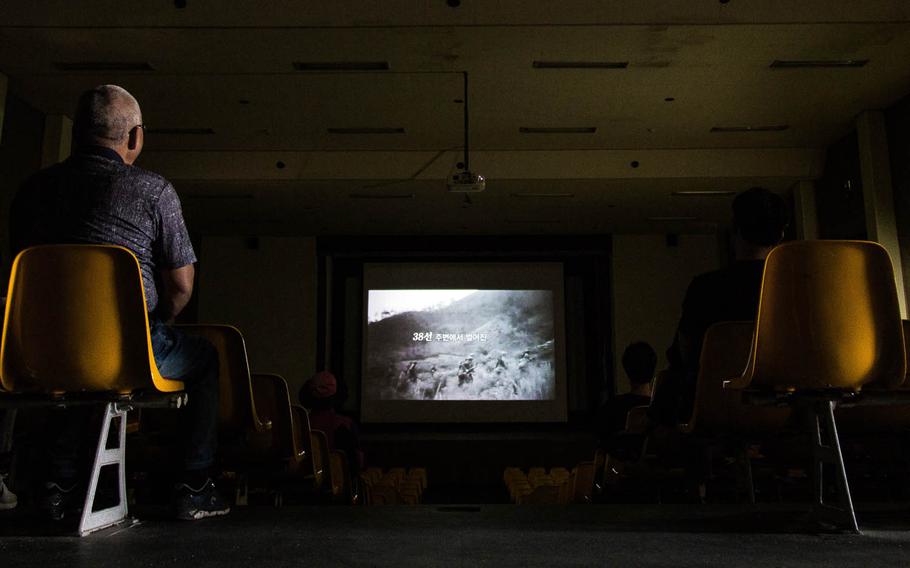 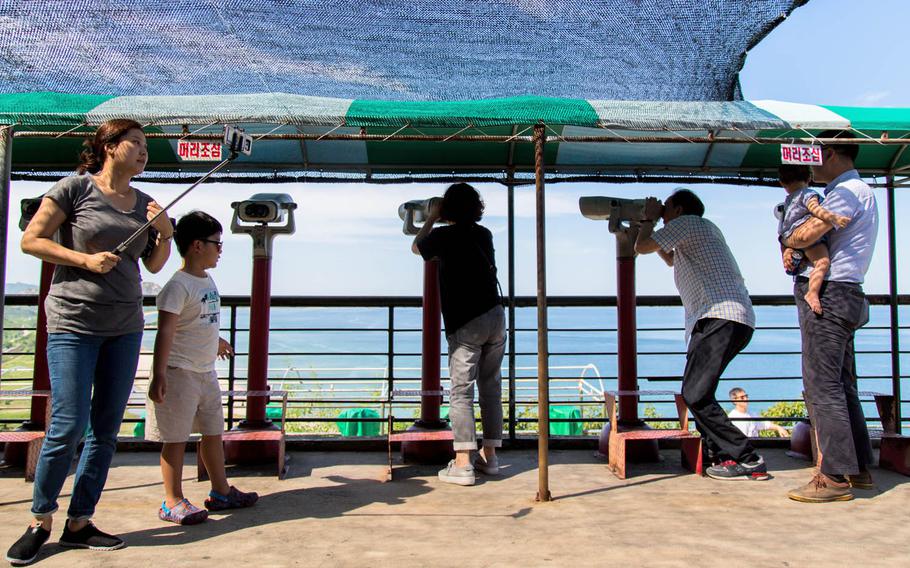 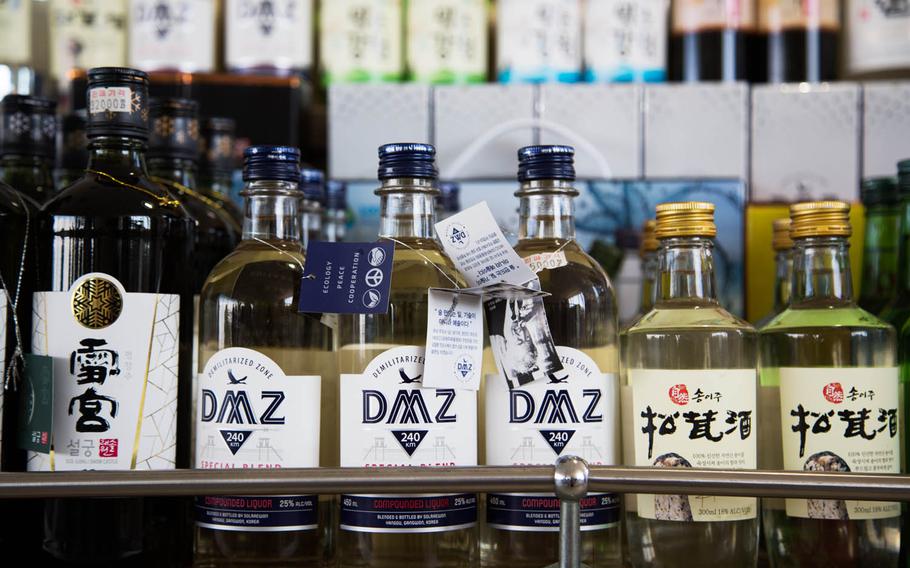 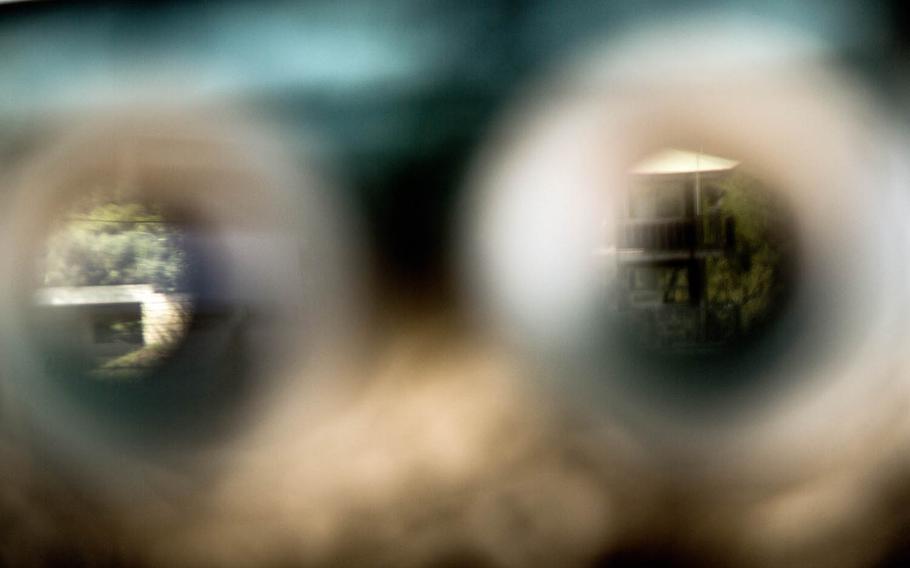 A binocular view of North Korea from an observatory near Goseong, South Korea, Saturday, Aug. 26, 2017. (Marcus Fichtl/Stars and Stripes) 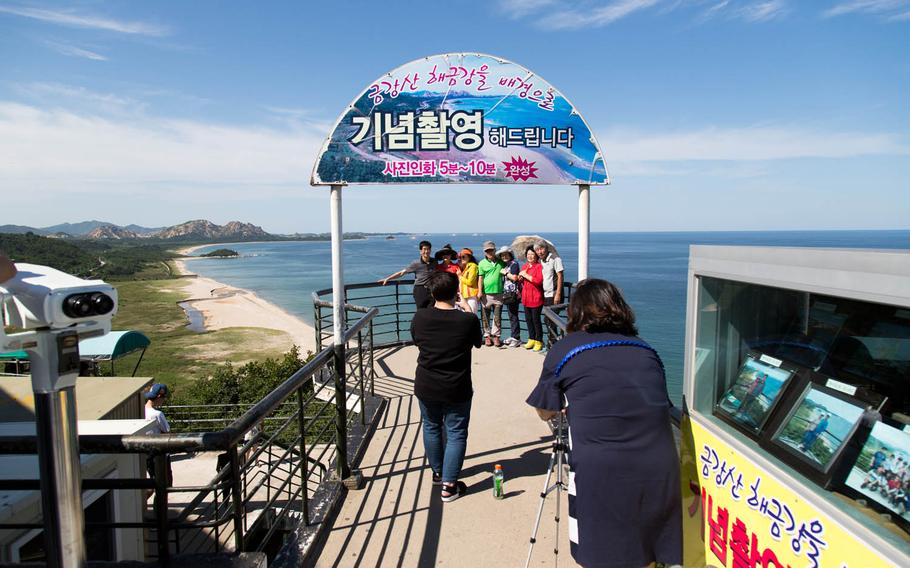 Tourists pose for a photo near the Demilitarized Zone in Goseong, South Korea, Saturday, Aug. 26, 2017. (Marcus Fichtl/Stars and Stripes) 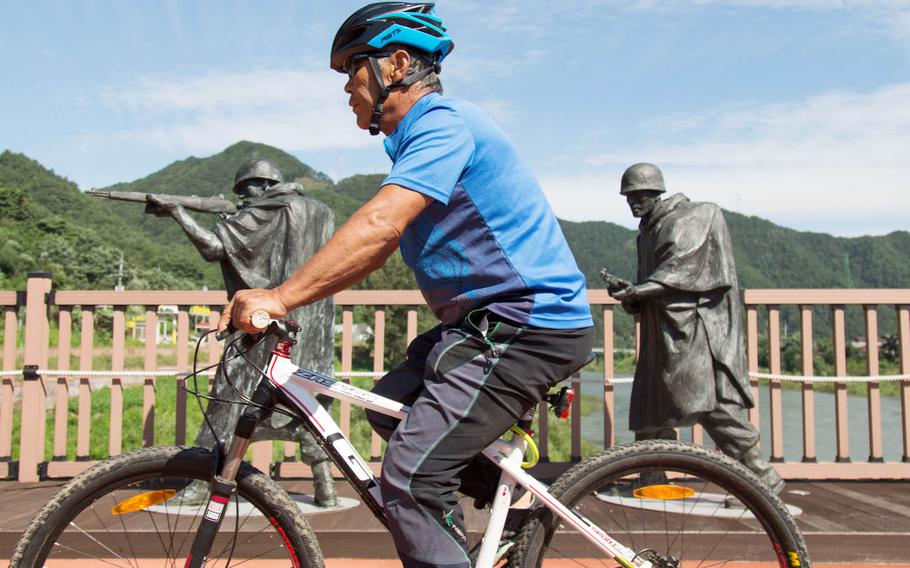 GOSEONG, South Korea — Tourists snapped photos with North Korean mountains in the background, apparently unfazed by the fact they were about 60 miles away from the launch site of a morning missile test.

The Korean Peninsula is bisected by the Demilitarized Zone, a misnomer since the 2.5-mile-wide, 150-mile-long no man’s land is lined with barbed wire and dotted with land mines.

That doesn’t stop hordes of South Koreans, Americans and other sightseers from getting as close as they can, making the area near the world’s most heavily fortified border an unlikely tourist mecca.

“I came here from Seoul with acquaintances to look at the views,” Lee Hae Eun, 31, said during a recent visit to the observatory that overlooks the DMZ at the east coast border city of Goseong.

“I’m not worried that North Korea will do something even though it’s very near here. North Korea conducts provocations all the time,” she said.

Such is the paradoxical state of affairs on the divided peninsula since the 1950-53 Korean War ended with an armistice instead of a peace treaty.

The North is known to have tens of thousands of soldiers and massive amounts of artillery dug into positions near its side of the DMZ. But traffic jams clog southern highways as people head toward the frontier, which feels more like a theme park than a war zone.

Money shot Many foreigners are familiar with the side of the DMZ that includes the truce village of Panmunjom in the Joint Security Area, with a row of blue buildings that straddle the military demarcation line and are used for talks between the sides.

South Korean agencies and the USO run near-daily bus tours to the area, about 35 miles northwest of the capital, Seoul, for about $100.

It’s usually on the agenda of visiting dignitaries, who are photographed standing on the demarcation line in what news photographers and camera crews call the “money shot.”

During a trip in April, Vice President Mike Pence gazed toward the North from the steps of the Freedom House -- the main visitors’ hall.

Tourists can even step into North Korea inside one of the blue buildings after being briefed about its history as the site of talks leading to the armistice agreement that ended the fighting but left the countries in a technical state of war.

Once outside, soldiers enforce strict rules about movements and photos. Guides can no longer stop at the Bridge of No Return and the site of the 1976 ax murders of two U.S. officers because of the tension.

People on these tours also trek through a mile-long infiltration tunnel dug by North Korea and discovered by South Korean forces in 1978.

Another highlight is peering out at the North through coin-operated binoculars from the Dorasan Observatory as socialist propaganda blares through loudspeakers.

A giant map explains what can be seen on the other side, including the now-closed joint industrial park in Kaesong; the so-called propaganda village of Kijong-dong, which is believed to be largely vacant; and on a clear day, a giant statue of the communist state’s founder, Kim Il Sung.

A new $7 million building, which will be nearly 40 feet closer to the North, is under construction and will provide a better view.

Retired Army Lt. Col. Stephen Tharp, a Korea specialist writing a series of "Guidebooks to the Korean Frontlines," said tourism in the area began in the early 1970s and has developed rapidly.

“Each place keeps changing,” he said.

North Korea also conducts tours on its side of the JSA, but Americans won’t be joining those anytime soon. President Donald Trump’s administration has barred U.S. citizens from traveling to North Korea as of Sept. 1 because of concerns about detentions after the death of student Otto Warmbier.

North of the 38th Parallel Panmunjom is on the famous circle of latitude that once divided the peninsula between U.S.-backed forces in the south and communist troops in the north.

But the DMZ was carved after the 1950-53 war and snakes from south to well north of the 38th Parallel until it reaches the white sands that line the east coast.

If you drive, you may want to stop at 38 Coffee before heading to parallels north. If you surf, there’s the so-called 38th Parallel beach.

Goseong, which has a population of about 56,000, used to be part of North Korea and is in the province of Gangwon, which was split during the war.

On the North Korean side, about 60 miles away, is the port city of Wonsan, which has been the launch site for several missile tests into the turquoise waters of the Sea of Japan, known as the East Sea in South Korea.

The lush, mountainous inland area was the site of some of the fiercest fighting of the war, including the 1951 battles of Heartbreak Ridge and the Punchbowl.

“Sometimes it was North Korea, sometimes it was South Korea,” said Tharp, who often takes U.S. Korean War veterans on trips to see their former battlefields.

Many monuments testify to victories and defeats, including a unique red bridge that crosses a river near the city of Inje dedicated to the memory of Army 2nd Lt. Thomas W. Livingston Jr.

The bridge is decorated with life-size statues and silhouettes of U.S. soldiers in action, reminiscent of the Korean War Veterans Memorial in Washington.

A plaque says Livingston was fatally wounded in an ambush in 1952, leading many men to drown trying to retreat across the river. Livingston is quoted as saying that a bridge in the area would have saved many lives.

Other reminders of potential danger include artillery positions and South Korean army bases visible from the highway, which is also lined with stalls selling roasted corn on the cob and potato cakes.

Now it’s popular with sunbathers and hikers as evidenced by the colorful hotels that dot the coast until you hit the barbed wire fences and guard posts aimed at preventing amphibious infiltrations from the North.

The Goseong Unification Observatory offers a glimpse of North Korea’s Mount Kumgang, which was the site of past cultural exchanges between the two rivals until a tourist was killed by a North Korean soldier after wandering into a restricted zone in 2008.

“I just love history and wanted to see it,” she said before heading out to the observatory deck.

Olympic worries Many South Koreans say they feel immune to the tensions after decades of brinkmanship in relations with North Korea.

Local officials say the number of tourists at the DMZ and surrounding areas has decreased slightly since last year, but that’s largely because of a decline in Chinese tourists due to a diplomatic spat over a U.S. missile defense system.

The area of Paju, which makes up the western half of the DMZ, recorded 223,047 foreign and South Korean tourists from January through June, compared with 265,695 in the same period last year. Those figures don’t include the Joint Security Area, which is controlled by the United Nations.

There were 1.4 million tourists in the Goseon area for the first six months of this year, compared with 1.5 million for the same period in 2016, according to the local tourism department.

Rising fears over North Korea’s nuclear weapons program have cast a shadow over the Winter Olympics, beginning in February in Pyeongchang, about 50 miles south of the DMZ.

Facing questions about security, the International Olympic Committee has expressed confidence that the games will go on as planned.

International Olympic Committee President Thomas Bach has met with the leaders of China and South Korea. “In none of the discussions has anybody expressed any doubt” about the Olympics, the IOC said in a recent statement.

“Athletes’ safety and security are of course a primary concern for the IOC,” it added.