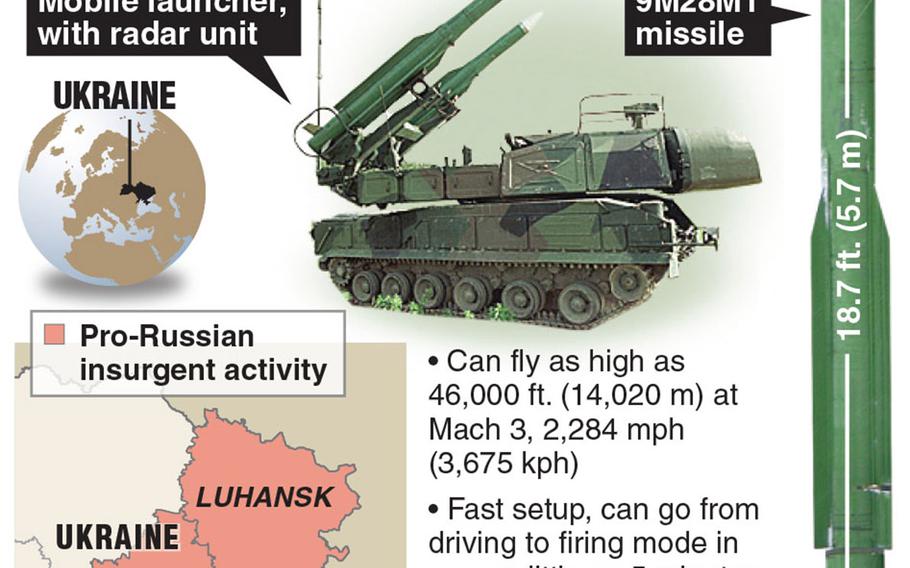 While much remains unclear about the downing of the Malaysian airliner over eastern Ukraine, most analysts believe it was hit by a Russian-built anti-aircraft missile fired by a system that NATO innocuously calls “Gadfly.”

Military analysts say the SA-11 Buk missile system was likely responsible for downing the plane Thursday and killing all 298 people on board. The system, in the service of both the Russian and Ukrainian armies, is also reported to be in the hands of pro-Russian separatists fighting against the Ukrainian military.

Rebels in June claimed to have a Buk missile launcher but have now denied that. If they do have one, it is unclear where they would have procured it.

While not among Russia’s most modern surface-to-air missiles — such as the long-range S-200 and S-300 that are designed to intercept ballistic missiles — upgraded versions of the Buk are considered highly capable and a major threat to combat aircraft. In fact, Russia found itself on the receiving end of the Buks during the 2008 war with Georgia, when Georgian forces used the system to shoot down three Russian SU-25 ground support jets and even a TU-22 strategic bomber on a reconnaissance mission.

The highly mobile Buk system, which consists of a tracked vehicle carrying four missiles and another equipped with a set of radars, was first introduced into service in the late 1970s and has undergone a series of upgrades. It has been exported widely because of its ability to engage targets at both high and very low altitudes. Most versions are capable of hitting targets above 70,000 feet.

Analysts said the Buk’s 18-foot missiles, which reach speeds of more than three times the speed of sound, are more than capable of taking down an airliner flying at a set altitude and taking no evasive measures. The explosive warheads have a proximity fuse designed to spray a target aircraft with thousands of pieces of shrapnel.

“If you have a capable weapons system like that with a trained crew skilled in the operation of that system, it’s a pretty easy task,” said Gideon Ewers a former senior official of the International Federation of Air Line Pilots’ Associations, which represents over 100,000 commercial pilots worldwide.

The Boeing 777, which had taken off from Amsterdam and was bound for Kuala Lumpur, was flying along a standard international air corridor used daily by hundreds of civilian airliners between Europe and Asia.

Eurocontrol, the Brussels-based European air traffic control body, said Ukrainian authorities had closed the airspace over the east of the country to civilian aircraft flying altitudes of up to 32,000 feet. But Flight MH17 was cruising at 33,000 feet when it was struck. On Thursday, the region was declared off-limits to all civilian flights.

Ukraine and Russia immediately traded blame for the incident, with the Ukrainians accusing the pro-Russian rebels who control that region of the country of having shot down the airliner. President Petro Poroshenko called the incident an “act of terrorism.” Moscow, meanwhile, laid the blame on Kiev’s door, saying the incident was reminiscent of the accidental downing of a Russian airliner in 2001 by a Ukrainian surface-to-air missile.

Ewers suggested that whichever side shot it down probably did so through “mistaken identity,” likely believing Flight MH17 was an enemy aircraft.

“I’m almost convinced that whoever shot it down didn’t mean to shoot it down,” said Ewers, now an aviation consultant. “They may have intended to shoot something down, but not a civilian 777.”

Ewers noted that it was highly unusual for civilian airliners to still be flying over an active war zone, where several Ukrainian warplanes have been shot down in recent days. He added that several international airlines had filed flight plans to avoid that airspace entirely.

“It appears that aviation authorities in Ukraine believed that the rebels were armed only with shoulder-fired missiles that have a range of up to 15,000 feet, and that flight levels above that would guarantee safety,” he said.

Retired Brig. Gen. Kevin Ryan, director of the Defense and Intelligence Project at Harvard University’s Belfer Center, told CNN the launcher in question was apparently operating independently of the command-and-control unit, which includes a more sophisticated radar system than was likely available to the launch crew.

Ryan said it takes weeks or months to train the crew to fire the system.

“This is not the kind of weapon a couple of guys are going to pull out of a garage and fire,” he told CNN.