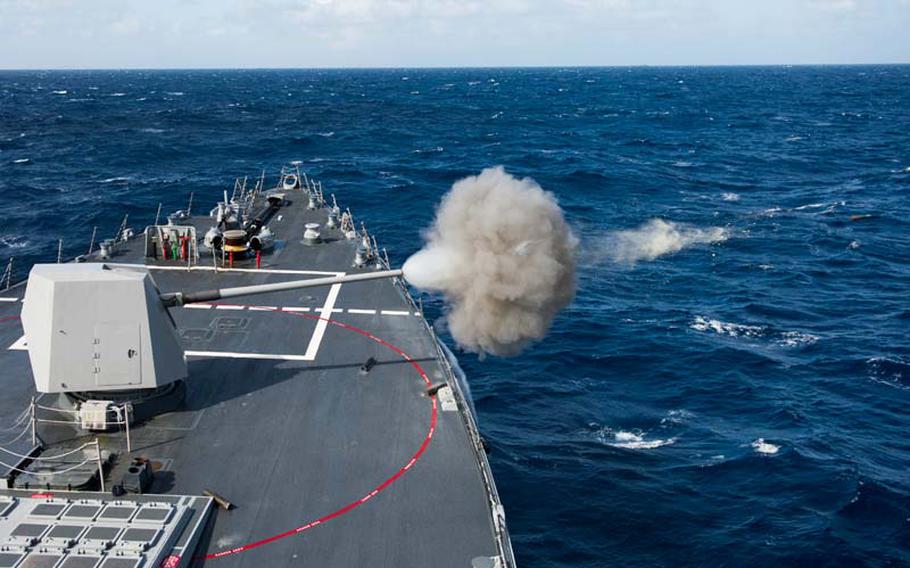 A round is fired from an Mk-4 5-inch gun during a live-fire weapons shoot aboard the guided-missile destroyer USS Preble July 13, 2013, while the ship was on patrol with the USS George Washington Carrier Strike Group. (Paul Kelly/U.S. Navy)

The USS Preble is expected on Thursday, with the USS John Paul Jones pulling in on Friday.

The Preble’s shift from San Diego will allow it to provide increased security and a greater forward presence in the Pacific Ocean, Robert T. Bryans, Jr., the ship’s commander, said in a statement released by Naval Surface Group Middle Pacific, the command in charge of surface ships home-ported at Pearl Harbor.

The Preble replaces the USS Reuben James, which was decommissioned in July 2013, as a middle Pacific surface combatant. As a Flight 2A-type destroyer, the Preble can carry helicopters, the statement said.

The John Paul Jones will replace the guided-missile cruiser USS Lake Erie, which will stay in San Diego after undergoing extended repairs there.

John Paul Jones brings updated advanced Aegis missile capabilities to the surface group. It replaces Lake Erie in Hawaii as a rotational ballistic missile defense deployer and as a testing ship as part of a long-range U.S. commitment to the security of the Indo-Asia-Pacific region, the statement said.

John Paul Jones Commander Andrew Thomson said his crew was ready to assume the role as the Navy’s Integrated Air and Missile Defense test ship. In the coming years, the ship is expected to test newer and more advanced systems that will be used to defend the nation and allied forces overseas, Thomson said.

John Paul Jones was commissioned Dec. 18, 1993, and is named after the famed American Revolutionary War naval captain. It was built at Bath Iron Works in Bath, Maine.

Commissioned Nov. 9, 2002, Preble is the sixth U.S. Navy ship named after U.S. naval hero Commodore Edward Preble, who battled the Barbary pirates off the coast of North Africa in the early 1800s. Preble led a naval blockade of Tripoli, Libya, and oversaw an officer corps that would later lead the U.S. Navy in the War of 1812.

Deployments by both ships in the future are expected to extend the Navy’s forward presence in the western Pacific and beef up maritime security, Williams said.