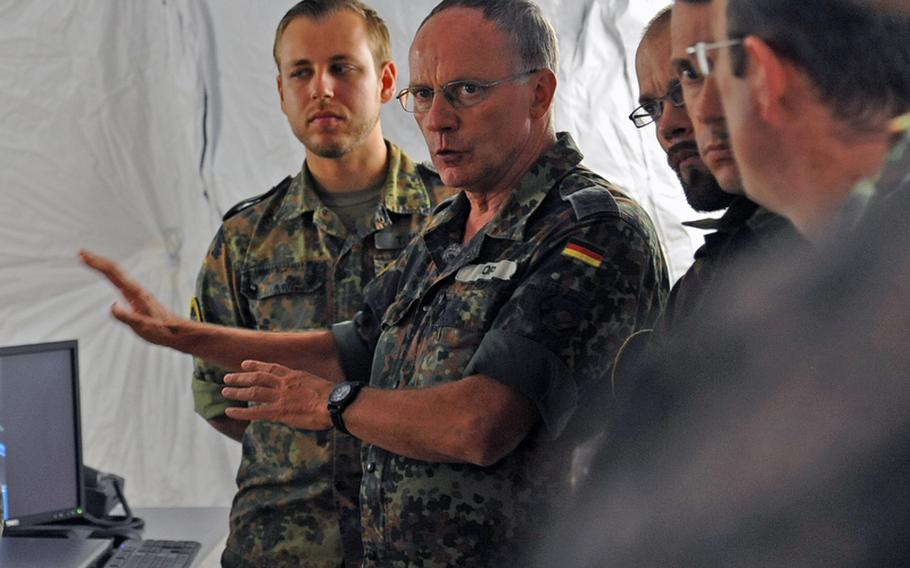 German Air Force Col. Gernot Kopf, second from left, of the Extended Air Defense Task Force, asks a question during a tour of the new mobile tactical operations center of the 10th Army Air and Missile Defense Command at Rhine Ordnance Barracks in Kaiserslautern on Aug. 28, 2012. (Michael Abrams/Stars and Stripes)

German Air Force Col. Gernot Kopf, second from left, of the Extended Air Defense Task Force, asks a question during a tour of the new mobile tactical operations center of the 10th Army Air and Missile Defense Command at Rhine Ordnance Barracks in Kaiserslautern on Aug. 28, 2012. (Michael Abrams/Stars and Stripes) 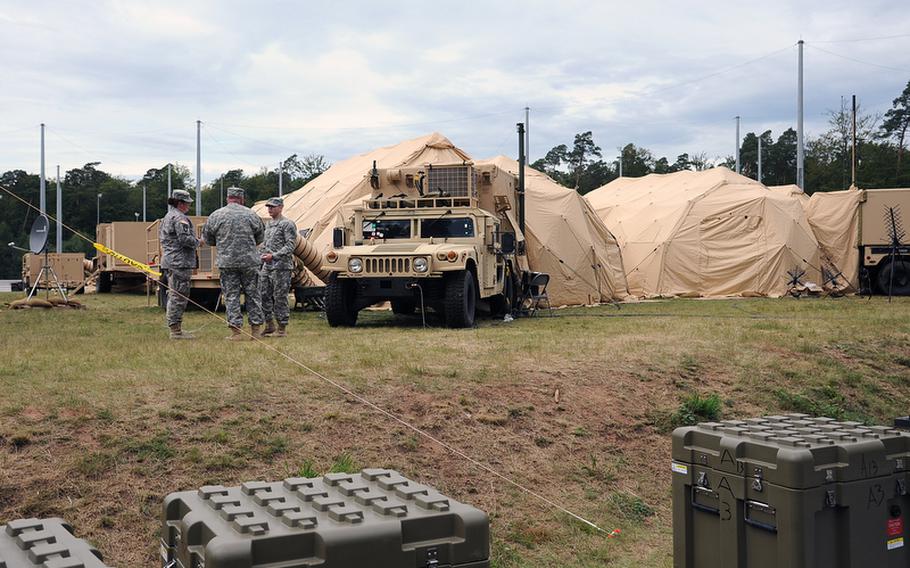 The 10th Army Air & Missile Defense Command's new mobile tactical operations center set up on Rhine Ordnance Barracks in Kaiserslautern, Germany. The boxes in the foreground are used for transporting equipment used in the TOC. (Michael Abrams/Stars and Stripes) 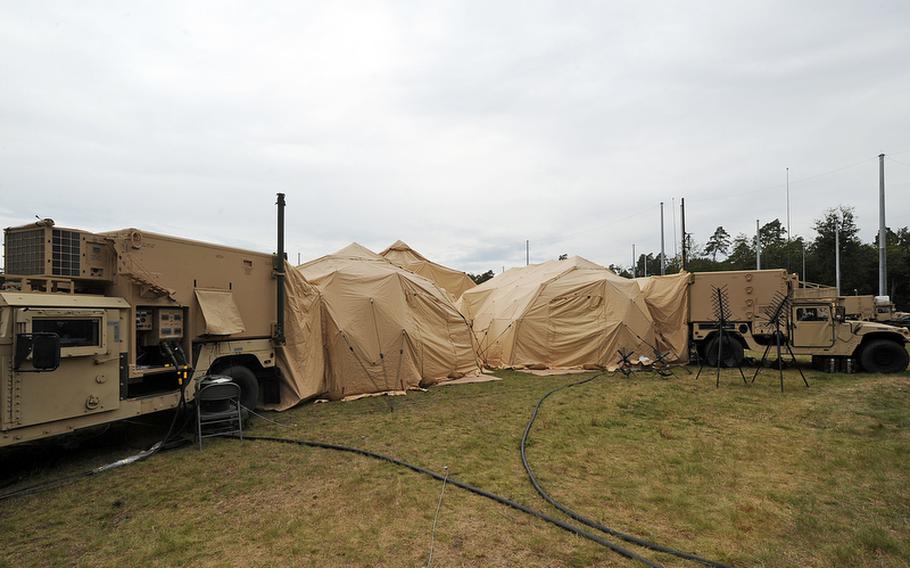 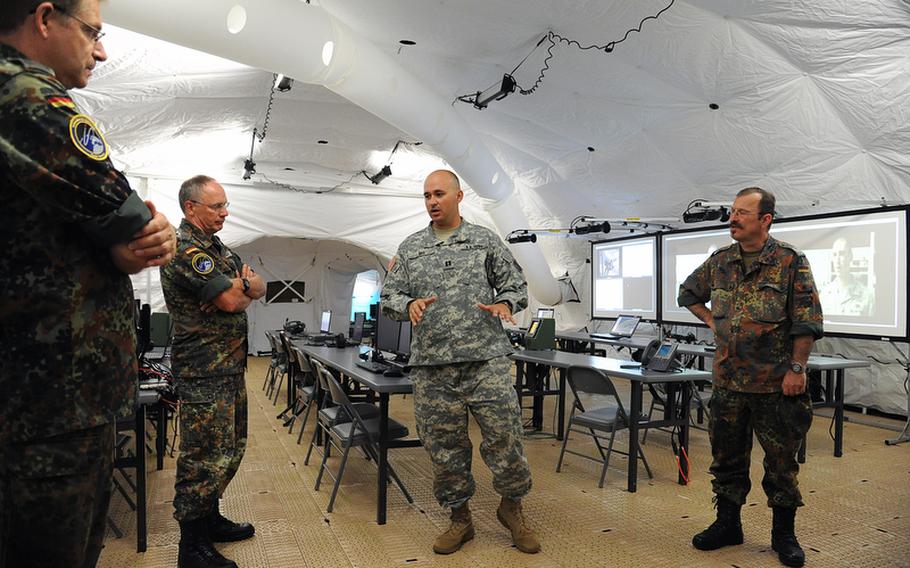 Capt. Michael Bux of the 10th Army Air & Missile Defense Command in Kaiserslautern, Germany, talks about the unit's new mobile tactical operations center with visitors from the Extended Air Defense Task Force during a tour of the TOC on Tuesday. (Michael Abrams/Stars and Stripes)

KAISERSLAUTERN, Germany &mdash; The tan tents erected on an Army base at Kaiserslautern don&rsquo;t look like anything special.

But these are no ordinary military-issue tents: To take a peek inside requires leaving one&rsquo;s cellphone at the door, and the soldiers who work inside must have a secret security clearance.

Issued to the 10th Army Air & Missile Defense Command this summer, the tactical operations center is the only one of its kind in Europe and only the second one being used by the U.S. Army worldwide, 10th AAMDC officials said this week.

&ldquo;You can call it the brains of the organization,&rdquo; said Army Capt. Laron Bybee, a defense of Europe planning officer for the 10th AAMDC. &ldquo;This is where the command and control of the missile defense fight would be taking place.&rdquo;

While the tactical operations center is focused on ballistic missile defense, it&rsquo;s not tied to a particular stage or milestone within the president&rsquo;s plan, said Army Capt. Michael Bux, chief of passive defense for the 10th AAMDC.

The unit would employ its tactical operations center any time ground-based air or missile defense Army units were deployed within the U.S. European Command&rsquo;s area of responsibility, Bux said. The area includes 51 countries that extend into the Caucasus and includes Israel, according to EUCOM&rsquo;s website.

The center, along with the 10th AAMDC commander and soldiers who work in the mobile unit, would be deployed to the same location to provide command and control to those units, officials said.

The center could also be deployed to provide early warning missile detection to other forward-located land-based forces, Bux said. The 32nd Army Air and Missile Defense Command, based at Fort Bliss, Texas, owns the other mobile tactical operations center and conducted that mission during Operation Desert Storm, Bux noted.

The 10th AAMDC will use its new equipment during the upcoming Austere Challenge exercise, Bux said. U.S. government officials have said Austere Challenge 12 would be the biggest and most significant military exercise ever conducted by the U.S. and Israel and would simulate the ballistic missile defense of Israel. In a Pentagon news briefing in June, Army Gen. Martin Dempsey, chairman of the Joint Chiefs of Staff, said the exercise, which was postponed this spring, was rescheduled for the &ldquo;October-November time frame.&rdquo;

&ldquo;If our unit was going to move forward from one (deployed) location to the other, we could move that one forward while we would collapse the other one,&rdquo; said Lt. Col. John Wanat, an operations officer for the 10th AAMDC. &ldquo;We couldn&rsquo;t just fall into some hard building in another country and assume we&rsquo;d have all the capabilities that this brings.&rdquo;

The group toured the center Tuesday.

&ldquo;I think it&rsquo;s very impressive. It&rsquo;s definitely state-of-the-art,&rdquo; said Col. Gernot Kopf, a member of the German air force and commander of the task force. &ldquo;It&rsquo;s highly mobile; you can put it into austere environments. I would love to work together with the U.S. and other NATO partners in such an operations center.&rdquo;