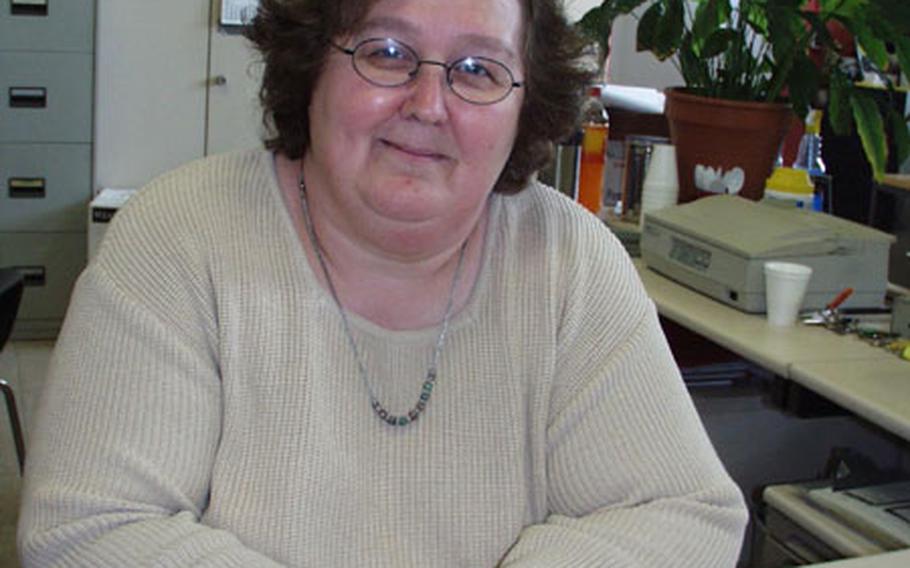 Mary Preston is an administrative assistant with the Area Support Team in Büdingen, Germany. She is so involved with caring for the soldiers and community of the 1st Squadron, 1 U.S. Cavalry Regiment, that, according to Command Sgt. Maj. David Davenport: "You can&#39;t think of Büdingen and the &#39;Cav&#39; without thinking of Miss Mary." (Kevin Dougherty / S&S)

Mary Preston is an administrative assistant with the Area Support Team in Büdingen, Germany. She is so involved with caring for the soldiers and community of the 1st Squadron, 1 U.S. Cavalry Regiment, that, according to Command Sgt. Maj. David Davenport: "You can&#39;t think of Büdingen and the &#39;Cav&#39; without thinking of Miss Mary." (Kevin Dougherty / S&S) 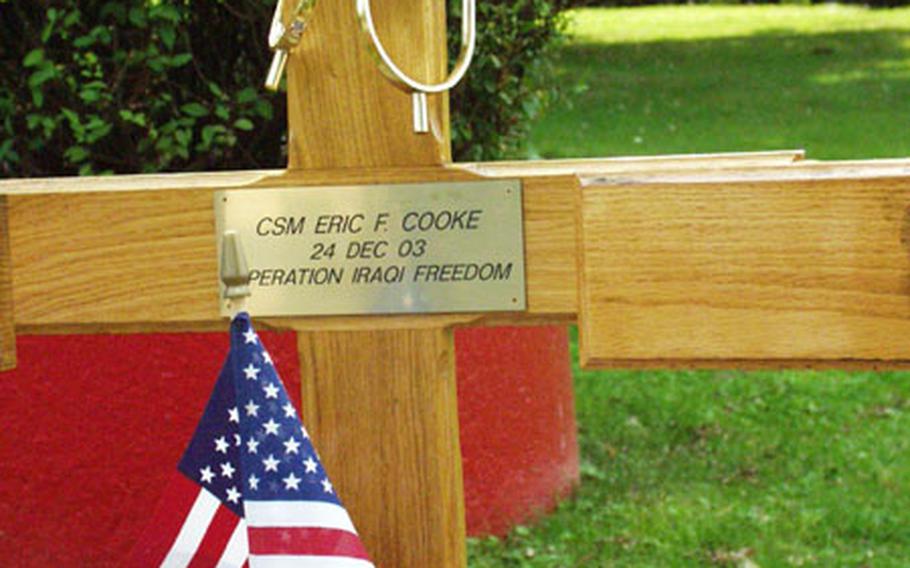 One of Mary Preston&#39;s many duties is watching over a garden of crosses near the flagpole at Armstrong Barracks in Büdingen, Germany. The garden features a cross for each of the squadron&#39;s 10 soldiers who have died in service to their country since the 1991 Gulf War. (Kevin Dougherty / S&S)

BUDINGEN, Germany &#8212; In organizations or office settings there often is that one soul who keeps everything running smoothly. It&#8217;s the person folks gravitate to in a pinch for answers, or advice, or support.

While there are people who fill that bill in B&#252;dingen, home of the 1st Squadron, 1st U.S. Calvary Regiment, there is one person in particular who draws a crowd. Her name is Mary Preston, and it seems everybody on Armstrong Barracks knows her.

&#8220;Even the guys who were stationed here and left, they still come back and visit Mary,&#8221; said 1st Lt. Roger Wang, a platoon leader with Apache Troop.

During the squadron&#8217;s deployment to Iraq, Wang served as the rear detachment&#8217;s executive officer. In that capacity, he spent a lot of time with Preston, an administrator for the Area Support Team in B&#252;dingen, who had to juggle innumerable tasks.

To sit in Preston&#8217;s office and watch her dispense her homespun charm as she answers question after question is to watch a maestro at work. She never seems to miss a beat.

Soldiers and civilians come to her with a litany of concerns, ranging from work orders to facility access issues to questions about value added tax forms. Preston displays a desk-side manner that is magnetic and genuine, endearing her to hundreds of people in the community.

&#8220;Sometimes I feel this place is a mini-city hall,&#8221; Preston said between customers one afternoon last month.

If someone needs a key, or loses a key, they come to &#8220;Miss Mary,&#8221; as she is affectionately called. If someone wants to reserve a meeting room or a gazebo for a barbecue, they come to her. If someone &#8212; and this has happened &#8212; needs advice on a personal problem, they just cross her threshold.

Her father, Leroy Eugene Messner, met her German mother while he was stationed in B&#252;dingen. When Preston was 11 or 12 years old, her father died of malaria, which he had contracted in South Korea, before his arrival in Germany.

Like her mother, Preston married a GI, and now has two grandchildren. She&#8217;s been working for the Army for 22 years and has been in B&#252;dingen for the past decade.

So when Wang says Preston takes her job personally, he&#8217;s not kidding.

For now, however, her workplace has all the appearance of a person who isn&#8217;t going anywhere anytime soon.

There is a row of filing cabinets topped by books and various manuals, such as one on housing and another on fire procedures. Well behind her, on top of another row of cabinets against the back wall, is a roll of Christmas wrapping paper, which probably hasn&#8217;t been moved since last December.

Perched atop one of her computer monitors is a hairy, stuffed animal that Sgt. 1st Class Robert Mickle gave her when the rear detachment disbanded after the squadron returned from Iraq. Like Wang, Mickle worked side-by-side with Preston while the squadron was deployed.

One of Preston&#8217;s more somber duties is to watch over a garden of wooden crosses near the flagpole on base. The memorial features a cross for each of the 10 troops killed in the line of service since the 1991 Persian Gulf War.

Preston&#8217;s deep devotion to the cavalry unit has certainly not gone unnoticed.

On an office wall are several plaques presented to her over the years. Some are fairly pedestrian, while others are very exclusive, usually reserved for the wives of senior leaders.