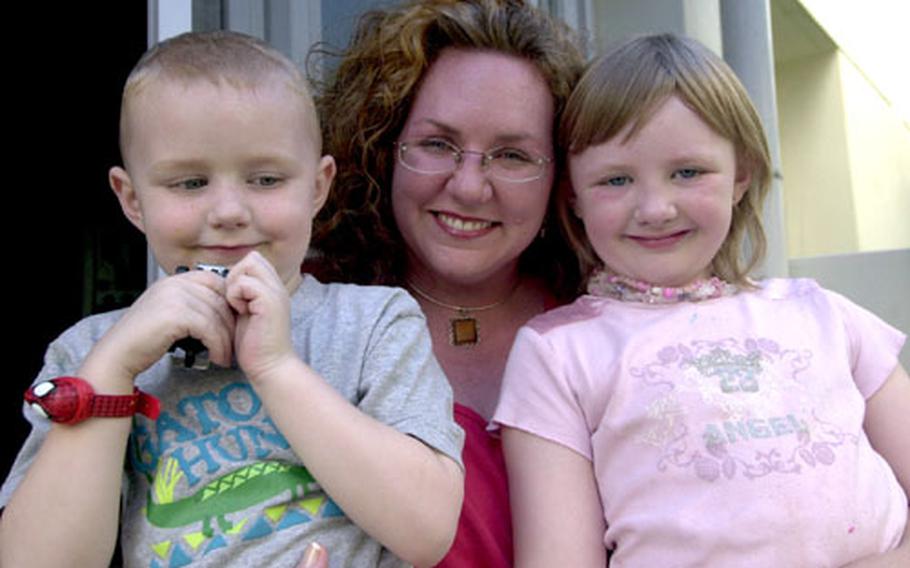 Aimee Hodgin, her daughter Gabrielle and son Montgomery are happy to be on dry land after being involved in a ferry incident off South Korea’s coast during a noncombatant evacuation exercise in April. (T.D. Flack / S&S)

PYONGTAEK, South Korea &#8212; The U.S. military will take another look at drills for evacuating military family members from South Korea in the event of war or other crises, officials said Thursday.

Possible refinements would apply to the seagoing portion of a twice-yearly noncombatant evacuation operation exercise.

U.S. Forces Korea&#8217;s re-examination of practices was prompted by an interview with Stars and Stripes, which had learned of problems from several participants in a NEO exercise that was aborted after a mishap at sea April 29.

Most of the criticisms were about what participants say was a lack of medical follow-up and counseling for people who were injured or traumatized by the incident.

The incident occurred some 10 miles out of Pusan when the commercial hovercraft used in the exercise struck an underwater object that South Korean authorities say was probably a whale.

The vessel, which took on water and began listing, was bound for Fukuoka, Japan.

All 163 passengers &#8212; including 32 NEO volunteers &#8212; were put aboard South Korean rescue vessels that brought them back to the Pusan ferry terminal. About 14 of the passengers were first placed in a life raft and transferred to a rescue vessel about 40 minutes later.

Some passengers suffered minor injuries when the hovercraft lurched to a sudden stop. Some lost property. And some say they&#8217;ve suffered lingering emotional distress.

Aimee Hodgin, who was participating in the exercise, took along her two children. The wife of a U.S. Army captain based in Seoul, she said her emotions ran from being stunned when the collision occurred to fear for her children&#8217;s safety &#8212; and then anger at what she took to be as a lack of concern by NEO officials back in Pusan.

Hodgin said one of the NEO officials began asking if anyone was interested in a renewed effort to get to Japan.

She and other NEO passengers remain dismayed by what they describe as a failure by USFK officials to do an active follow-up. They say officials should have asked each volunteer participant whether they needed medical follow-up appointments, post-trauma psychological counseling, chaplain&#8217;s visits or help submitting claims for lost property.

&#8220;I do think that the U.S. government should have stepped in there and made sure we were all fine,&#8221; said passenger Virginia Martin-Brown, a marketing director for the Installation Management Agency-Korea Region Office in Daegu.

&#8220;This was the first time I heard that there was a need to do any of this,&#8221; Brown said. Passengers were invited several times to spell out any needs, requests or comments about the exercise, he said.

In addition, he said, a review of the overall exercise showed that USFK&#8217;s existing procedures were adequate, had worked well, and that no passengers had contacted the command with pressing follow-up needs.

Nonetheless, Brown said, in the wake of the mishap, officials will take a close look at how the seagoing NEO drill can be improved. The next is to be held in October.