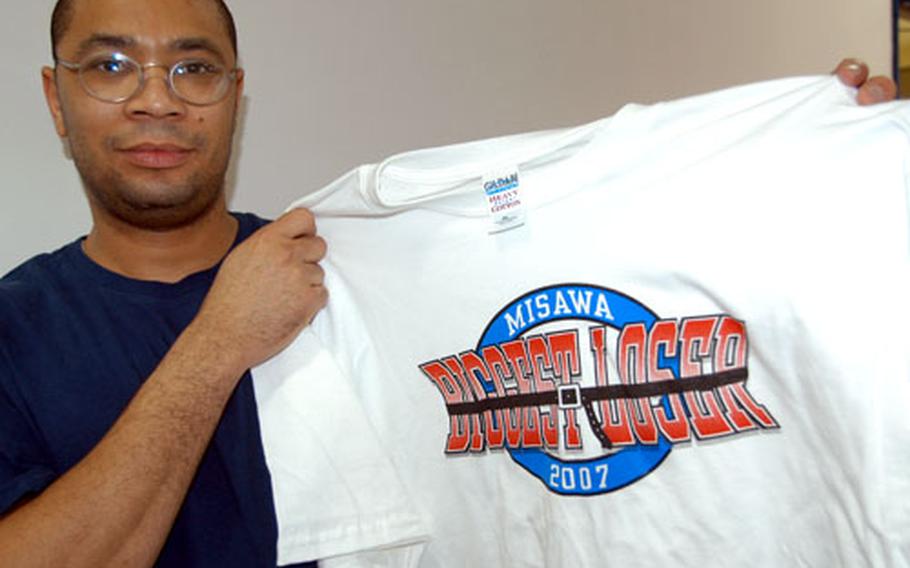 Tech. Sgt. Travis Jalaliddin, 31, might be swimming in this T-shirt by the time he finishes the “Biggest Loser” contest at Misawa Air Base, Japan. So far, Jalaliddin has lost 16 pounds. He is among 412 contestants participating in the 10-week contest, which ends March 31. (Jennifer H. Svan / S&S)

Splitting a meal at a restaurant. Cutting out soda and beer. Satisfying a sweet tooth with sugar-free pudding. Giving up bratwurst and fried chicken.

Of course, there&#8217;s also exercise &#8212; mornings and evenings, two to three hours a day, laps around the track, sweat left on treadmills.

The pounds are melting off like butter on a hot potato for some &#8220;Biggest Loser&#8221; contestants at Misawa Air Base. Since the first weigh-in Jan. 18, 412 people have lost a collective 2,700 pounds, according to contest organizers.

Four weeks remain until the final weigh-in March 31. Up for grabs: $2,000 to the four-person team with the highest body-weight percentage loss, and $500 to the top individual, plus second- and third-place cash prizes. There are 75 teams and another 112 people competing as individuals.

In the battle of the bulge, the contest&#8217;s homestretch could be the hardest, says nutrition expert Staff Sgt. Chad Robbins, noncommissioned officer in charge of Misawa&#8217;s Health and Wellness Center.

He also works out two to three hours a day, before and after school.

After losing 15 pounds, Darren Helzer, 29, a petty officer second class who works on Security Hill, said his weight is starting to level off. But he&#8217;s not gunning for the money, just a leaner frame and a healthier lifestyle.

Hardest for him was giving up his wife&#8217;s cheesecake.

&#8220;She makes the best cheesecake,&#8221; he said wistfully, before weighing in at the Potter Fitness Center last week.

When asked what he gave up for the contest &#8212; besides 16 pounds &#8212; Tech. Sgt. Travis Jalaliddin, 31, a 35th Maintenance Operations Squadron facilities manager, rattled off a mouth-watering list: &#8220;My pasta, my croissants, my occasional spicy chicken sandwich from Burger King. I didn&#8217;t know I was getting that much carbs before I was doing this.&#8221;

Navy spouse and mother of two Niki Ruscitto, 30, has lost 11 pounds so far and hopes to reach a weight of 145 by November.

The real challenge for many will come after the final weigh-in, Robbins said, &#8220;and it goes back on the individual to be self-motivated, whereas [now] they have the motivation to win the grand prize.&#8221;

Participants in Misawa&#8217;s &#8220;Biggest Loser&#8221; contest were required to attend a Health and Wellness Center nutritional briefing in hopes that participants would make lifestyle changes and lose weight in a healthy fashion.

Here are some tips from the HAWC that anyone who&#8217;s trying to lose weight can use:

Eat nutrient-dense foods low in calories, such as vegetables. &#8220;We tell them to eat a rainbow diet of vegetables,&#8221; said Staff Sgt. Chad Robbins, noncommissioned officer in charge of the HAWC. Carrots, for instance, are high in Vitamin A, while broccoli and other green vegetables are good sources of folic acid.Fad diets &#8212; such as those that eliminate carbohydrates &#8212; are a bad idea and at best, are short-term fixes, Robbins said. &#8220;When you start cutting out carbohydrates, you start decreasing energy. Carbohydrates are your body&#8217;s first source of energy.&#8221;Opt for complex carbohydrates, such as wheat bread, brown rice and wheat pasta, rather than simple carbohydrates such as white bread and rice. Complex carbs are higher in dietary fiber. It takes longer for your body to break down dietary fiber, keeping you fuller longer, while also flushing out fat.Exercise three times a week to maintain your body weight, or five times to lose weight, each time 30 minutes to an hour, Robbins said.To keep weight off long-term, don&#8217;t lose more than 1 to 2 pounds a week.&#8212; Jennifer H. Svan