Misawa troops get a view from the top 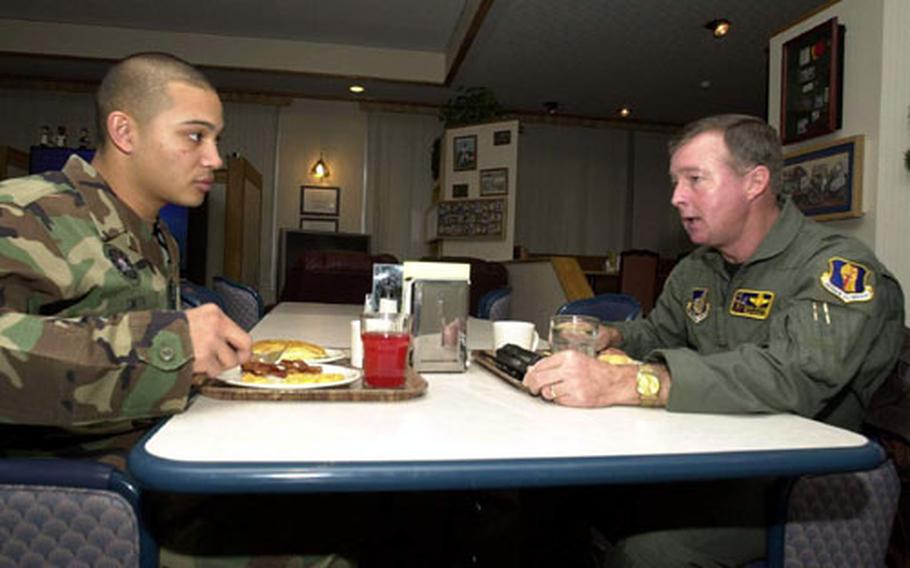 MISAWA AIR BASE, Japan &#8212; It isn&#8217;t every day an Air Force two-striper sits down to discuss the day&#8217;s agenda with a brigadier general over breakfast.

Smith said it wasn&#8217;t long before the intimidation factor yielded to a more relaxed mood. Atkins asked him about his family, his time in the Air Force and his aspirations.

&#8220;It was an eventful day for me,&#8221; Smith said of the daylong shadow program that&#8217;s giving young troops the opportunity to see how commanders make things happen.

&#8220;Often an airman working on the flight line will be scratching his head wondering about a new policy put into place; all he sees is the policy decision, not the bigger picture and foundation that went into making that decision,&#8221; Atkins said.

He began the shadow program here shortly after assuming the reins of the 35th Fighter Wing in July.

Atkins said when he was operations group commander at Kunsan Air Base, South Korea, a similar program impressed him. &#8220;I saw the strength of the shadow program run by now-Maj. Gen. Mark Welsh III, because it allowed junior airmen to see leadership dynamics from a different perspective,&#8221; he said.

Atkins specified that he should not be sent troops selected as airmen of the quarter, or for other accolades distinguishing them from their peers. &#8220;They already proved that they&#8217;re focused,&#8221; he said.

Atkins spent a year in the enlisted ranks before attending the University of Portland on a Reserve Officers Training Corps scholarship. &#8220;I&#8217;m a zealot about education,&#8221; Atkins said, adding that he tells that to every airman who shadows him.

Atkins noted that many programs can lead to a degree and commissioning but said, &#8220;The Air Force doesn&#8217;t market it very well. I spend a lot of time talking to them about education because I feel an obligation to pay back what I have achieved.&#8221;

He said troops are surprised to learn that a degree and commissioning can come through ROTC, direct appointments, officers training school or by an Air Force Academy appointment.

Bryant, of Hudson, N.Y., said he&#8217;s undecided about his career path but spending the day with Atkins let him observe subordinate commanders that he normally never would see.

Atkins said the shadow program also provides him with feedback from troops, giving him insights into quality-of-life aspects of which his subordinate commanders may not be aware.

Another change that was the result of a comment from a shadow is the forthcoming transformation of a portion of the Officers Club into a steak and seafood house open to all ranks.

Shortly after Atkins initiated the shadow program, a concurrent &#8220;take an airman to lunch&#8221; effort was launched encouraging subordinate commanders to get to know troops they command on a more personal level.

As 35th Logistics Readiness Squadron commander, the 26-year Air Force veteran is in charge of 400 troops. &#8220;One of the biggest obstacles for a commander is communication with the troops,&#8221; said Eilers, who considers himself &#8220;very accessible because I do leadership by getting out and walking around.&#8221;

He said he expanded the weekly lunch program concept by allowing his shadows to spend the entire day in his company, reading some of his e-mails, then giving them a chance to make a decision.

That gives him the opportunity to focus one-on-one, he said, and to pitch his views on leadership and the Air Force as a career.

Atkins, meanwhile, wanted his shadow program to cut across all services assigned to Misawa &#8212; which is how Army Pfc. Jonathan Graham, a signals analyst with the 403rd Military Intelligence Squadron, found himself at the Air Force general&#8217;s side.

Graham said he took a bold initiative asking Atkins what it felt like to wield so much power as wing commander.