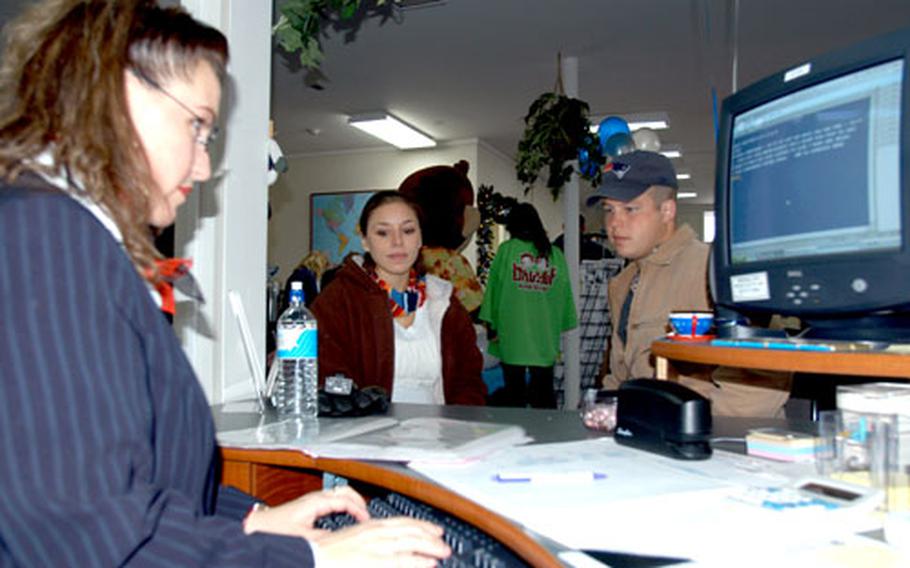 MISAWA AIR BASE, Japan &#8212; Base residents can still make travel plans for Sapporo&#8217;s dazzling snow festival or a spring break Beijing tour; they just need to use a different door now.

And, it has a new name: Misawa Information Tickets and Travel celebrated its grand opening Saturday. Special visitors included Col. Sam Angelella, 35th Fighter Wing commander, and Kenji World&#8217;s monkey mascot. Customers ate cake, signed up for local tours and won a slew of travel prizes, including a free trip for two to Sapporo&#8217;s snow festival in February, an overnight stay at Lake Towada and a five-piece luggage set.

Staff Sgt. Ryan Sleight and his wife, Jill, didn&#8217;t know about the grand opening until they found the door to the old Four Seasons was locked &#8212; and saw the big banner and the balloons. They were looking to book a four-day weekend to Tokyo to celebrate their first wedding anniversary.

Customers can book leisure travel to anywhere in the world or sign up for local tours in the same office; the two services used to be in separate rooms.

As part of the move, Misawa ITT (ITT is the Air Force name for its leisure travel agency) also received new furniture. The renovation cost about $25,000, Smith said, noting a lot of the work &#8212; knocking out a wall, painting the ceiling &#8212; was done in-house.

Beyond Misawa ITT, the rest of Building 1044 &#8212; former home of Outdoor Recreation &#8212; also is undergoing a $25,000 face lift, which should be complete in early 2006. Two spacious dojo rooms are being remodeled for the youth center, complete with new carpeting and mats. And another room will allow youth gymnastics to expand.

The former Four Seasons ticketing office will be set aside for the base honor guard &#8212; an air-conditioned room its members can use to dress before events at nearby Misawa&#8217;s collocated club.