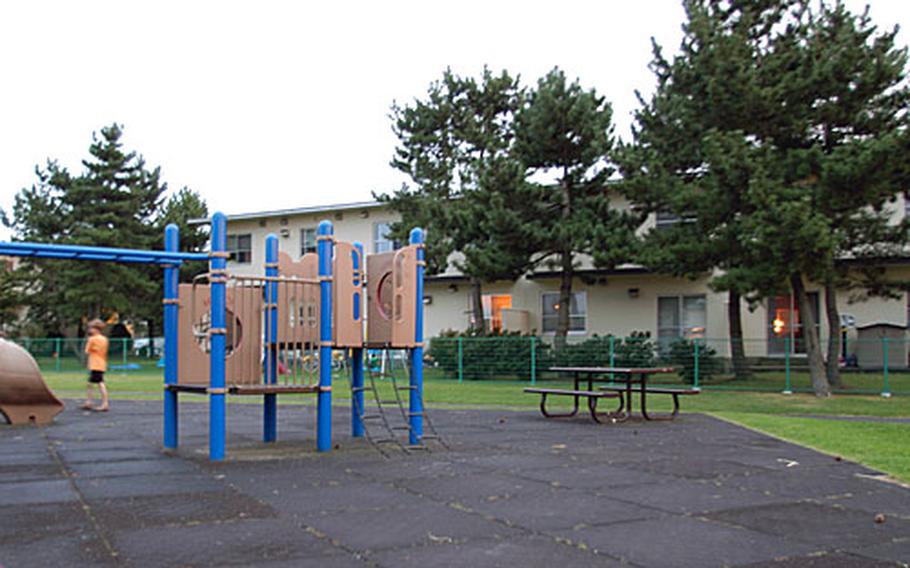 The neighborhood near Airplane Park at Misawa Air Base, Japan, was the latest hit in a string of house thefts. Items have been taken from nine homes since early September. (Jennifer H. Svan / S&S)

Or is it thieves?

Misawa Air Base officials, with the help of a witness, believe there may be more than one crook involved.

The suspect or suspects are getting no less brazen and appear to be targeting different neighborhoods. Two unlocked residences were entered Friday night between approximately 8:30 and 10:30 in main base housing near Robert D. Edgren High School, according to base officials.

Previous thefts were in housing in the vicinity of the base chapel.

While many on base were at the Air Force Ball on Friday night, individuals happened to be home in the houses that were robbed Friday.

This time, there was at least one witness.

Someone reported a white male running through the yard of a housing area around the same time a nearby unit reported a theft, said Maj. Scott Sanford, 35th Security Forces Squadron commander. The witness saw the person get into a vehicle, and then that vehicle and another sped away, leading officials to believe &#8220;there are potentially two to three individuals involved here,&#8221; Sanford said.

Investigators are working off a general description of a possible suspect and two vehicles, but have no substantive leads, Sanford said, though &#8220;we&#8217;re working some angles.&#8221;

Late Saturday afternoon, word had spread quickly to residents in housing by Airplane Park, near where one of the crimes reportedly occurred Friday night, that their neighborhood had been hit.

A few minutes later, Gilbert left to meet his wife, locking the front door before he left.

Residents in the area said they&#8217;ve all started locking up their doors and windows, even when they&#8217;re home.

&#8220;I think it&#8217;s a shame that we have to be so overly cautious on a military installation,&#8221; said Senior Master Sgt. Dwight Griffin of the 35th Communications Squadron.

Griffin and his family have been at Misawa for three months.

Shari Knowles, an Air Force spouse, said she&#8217;s alarmed by the fact that most of the thefts have occurred with someone at home.

Most residents said they feared more for their valuables than personal safety.

Air Force spouse Dawn Fousek said she now keeps her purse in the cupboard &#8212; instead of on the counter.

Items taken in Friday night&#8217;s thefts include a purse, a video game from on top of a refrigerator, and $12 left by the door for pizza delivery, Sanford said.

In all nine thefts, the homes were unlocked, Sanford said, and in most cases, someone was home at the time.

&#8220;Somebody walks in the back screen door or the front door and takes an object in easy reach, then immediately leaves,&#8221; Sanford said.

The crimes appear to be random, he said, with someone &#8220;possibly observing an opportunity at hand with people at home, late at night or when it&#8217;s dark. We don&#8217;t believe the people doing this are intending to do any harm to people in the home.&#8221;

Security Forces continues to step up patrols throughout base neighborhoods, Sanford said, and has dedicated a number of personnel and equipment to breaking open a lead in the case.

Base gates were closed for about an hour Friday night after the vehicles were reported leaving the scene of one of the thefts, officials said.

Base officials are encouraging residents to secure their homes and remain vigilant by keeping an eye on their living areas similar to a neighborhood-watch program.

Investigators believe the crimes most likely are being committed by a &#8220;younger person or persons, who are very thrilled with the thefts and view it as way to have fun,&#8221; Sanford said. &#8220;We are definitely going to put an end to their fun. They&#8217;re going to make a mistake sooner or later that will help us catch them.&#8221;

In light of the recent string of houses thefts at Misawa Air Base, officials recommend residents take the following steps to protect their belongings and help stop the crimes:

Secure your residence, especially when not at home.

Keep valuables away from front and rear doors.