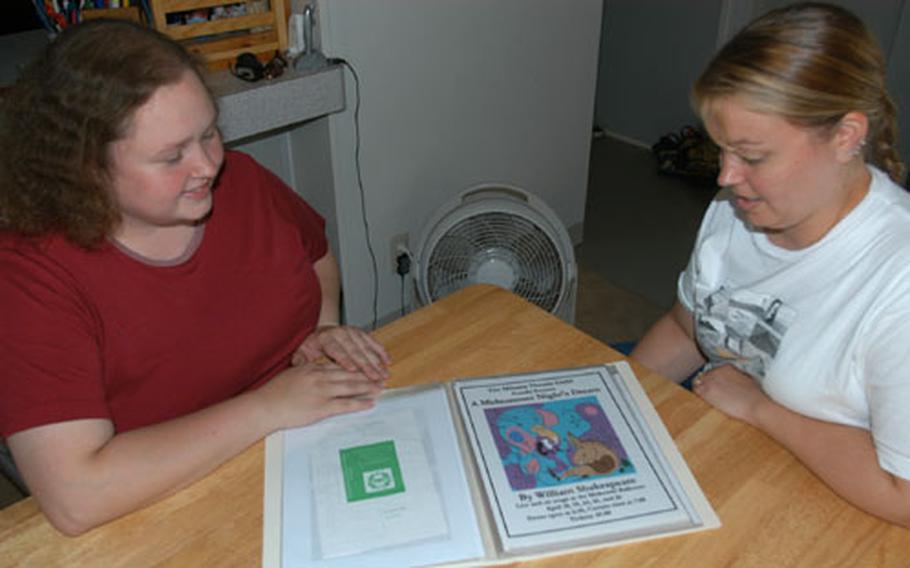 MISAWA AIR BASE, Japan &#8212; It&#8217;s an opportunity to meet friends, act on stage, orchestrate lights and props and, for the very ambitious, direct a play.

Misawa Theatre Guild, the base&#8217;s community theater group since the early 1990s, is in desperate need of people following a membership dip brought on by permanent-change-of-station season.

The group lost from 10 to 20 active members and seeks volunteers to run for one of five board seats in the Sept. 19 elections, said Sarah Schaal and Amy Tjaden, guild officers.

Though three of the seats can be occupied only by those already involved in the guild, two are open to newcomers.

The guild has about 94 members on its e-mail list, though far fewer are regular participants. Anyone can be a member, Schaal and Tjaden said, noting that the guild is a mix of active-duty Air Force and Navy, spouses, civilians and teachers.

Both Schaal and Tjaden joined the guild in 2001 with almost no stage experience. At the time, Schaal was new to Misawa and signed on as a way to meet people. She progressed from a bit part as a villager in &#8220;Fiddler on the Roof&#8221; to directing &#8220;Murder in the Magnolias&#8221; last spring and serving as current guild president.

Tjaden was interested in acting but was scared to try until the guild propelled her on stage. Most recently, she landed a big speaking part in Schaal&#8217;s play.

The guild usually puts on two major productions a year; due to time constraints and membership turnover, no play is planned for the fall or winter. Members instead want to hold smaller productions throughout the fall that take less time, such as a Halloween variety show of one-act skits. They need people to read a spooky poem or play a scary song. &#8220;We will take anything,&#8221; Tjaden said.

On tap later this month are two workshops &#8212; physical comedy and improvisation &#8212; for any interested base residents. The workshops provide training for guild members and promote the group on base, Schaal and Tjaden said.

The guild would like to put on a spring musical but that depends on how much interest members show, members said.

The guild meets about every other month. There are no membership fees. Time commitment varies but in the days or weeks leading up to a large production, can average a few hours three nights a week and some weekends. However, members said, the group hopes to lessen that obligation. Active-duty members can include guild membership on their performance reports, since it&#8217;s a service to the community, Schaal and Tjaden said.

The group&#8217;s next meeting is to be at 4 p.m. Sept. 19 in the Tower 118 recreation room. Contact the group through e-mail at: misawatg@yahoo.com for more information or to join the guild.