Seaman Andrew Handley, works through the driving snow as he shapes a portion of a snow sculpture, Jan. 31, 2014, at the 65th Annaul Sapporo Snow Festival in northern Japan. The team sculpted a 3-D version of the U.S. Navy Seabee's "Fighting Bee" logo. (Daniel Sanford/U.S. Navy)

Seaman Andrew Handley, works through the driving snow as he shapes a portion of a snow sculpture, Jan. 31, 2014, at the 65th Annaul Sapporo Snow Festival in northern Japan. The team sculpted a 3-D version of the U.S. Navy Seabee's "Fighting Bee" logo. (Daniel Sanford/U.S. Navy) 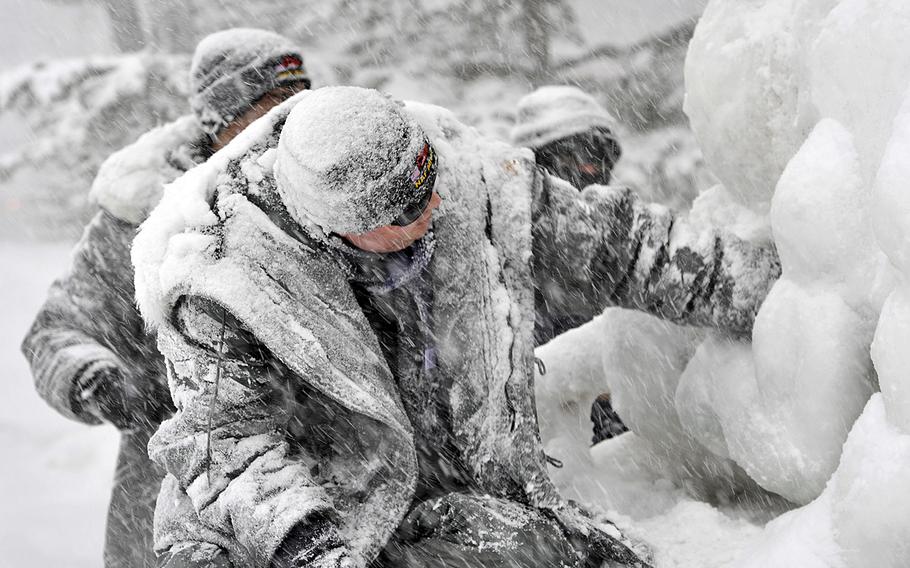 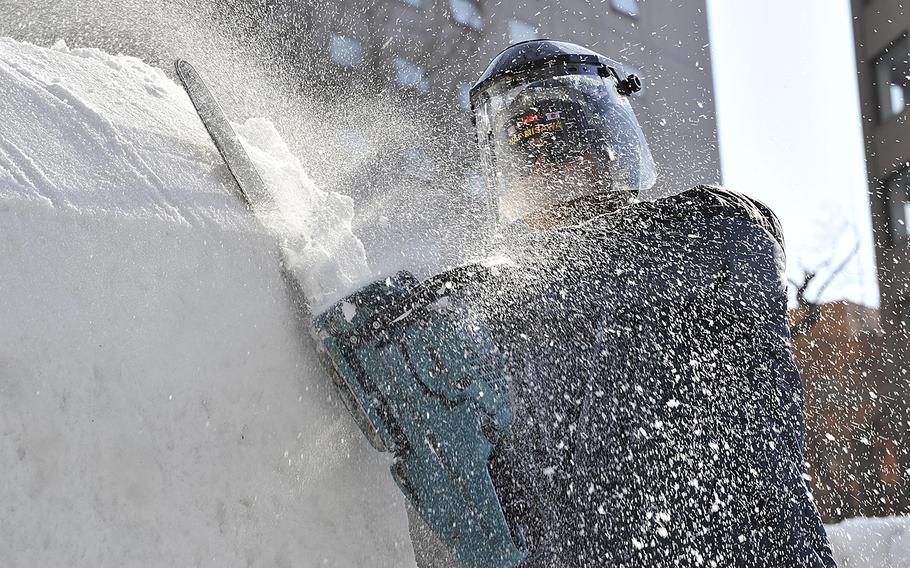 Chief builder Billy Harger uses a chainsaw to round off the top of a snow sculpture the Navy was building on Jan. 31, 2014, in Hokkaido, Japan. Harger was the captain of the 2014 Navy Misawa Snow Team, which is taking part in the 65th Annual Sapporo Snow Festival. (Daniel Sanford/U.S. Navy) 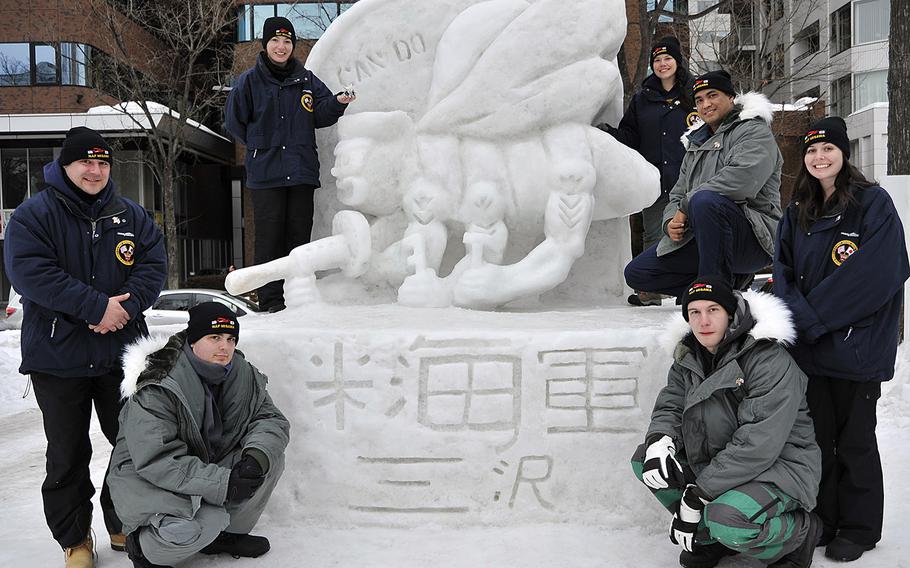 The 2014 Navy Misawa Snow Team poses on Feb. 3, 2014, with the "Fighting Bee" snow sculpture they completed for the 65th Annual Sapporo Snow Festival. The sculpture is a tribute to the U.S. Navy Seabees, who are celebrating their 72nd anniversary this year. (Daniel Sanford/U.S. Navy) SASEBO NAVAL BASE, Japan — To bring the Seabees’ intricate “Fighting Bee” to life from a block of snow, seven first-time sculptors from Naval Air Facility Misawa just called on the Seabee motto, “Can do.”

The 2014 Navy Misawa Snow Team had five days to complete a Navy-themed sculpture for the 65th Annual Sapporo Snow Festival, which ended Tuesday on Japan’s northern island of Hokkaido. The base has been involved for 31 consecutive years.

The team battled extreme conditions and their own inexperience to complete the sculpture, which honors the Navy’s construction force ahead of its 72nd birthday March 5. The team drew on the Seabee community’s camaraderie and strength.

“It felt like we were honorary Seabees for two weeks,” said Petty Officer 2nd Class Alexianna Morton, a 21-year-old analyst from Antioch, Calif. “We found a rhythm and found what worked for us to get it done and have a product we were proud of.”

The team — dubbed the “Sapporo Seven” — arrived at Odori Park on Jan. 28. Instead of immediately tearing into their 6-by-6-foot block of snow, they walked around to observe more seasoned teams, seek advice and take note of the tools they were using, said team leader Seabee Chief Billy Harger, 36, of Pearl City, Hawaii. That sparked a dash to buy cheese graters, blocks of wood and special chisels.

The team got to work Jan. 30 with axes, chisels and even a chainsaw to whittle the block into a roundish shape. Gradually, it began resembling a gun-toting bee with a sailor’s cap.

“After the first day, I think if you squinted, turned your head sideways and were told it was a bee, you might have figured out what we were making,” Morton said. “But by the third day, people were walking up to us while we were working and saying ‘hachi,’ which is Japanese for ‘bee.’ At that point, we knew we were headed in the right direction.”

Harger said getting the proportions correct was the hardest task. He told the team to “just do it,” and if it didn’t work, they could always try again. The team replied with, “Can do.” He said they nailed it on the first try.

When temperatures rose into the 40s for two or three days, the team raced to patch holes in the sculpture with a mix of snow and water. Then conditions plunged below zero with wind blowing snow at them horizontally, testing their fortitude.

“We completed the sculpture with solely the Navy team,” Harger said. “We didn’t have any help. I was really proud of that.”

The last two days were reserved for detail work, and the sculpture was completed Feb. 3. For the next week, Harger and his team took turns greeting their hosts and telling them about the Seabees’ proud history, which includes the Normandy invasion and service in every major conflict since then.

Morton called it one of the most important experiences in her Navy career.

“It was more than I could have asked for,” she said.

With the wars in Iraq and Afghanistan winding down, the Seabees have been reducing their numbers and decommissioning a number of battalions. Harger said it was a source of pride to showcase the community. He said Seabees past and present stopped by the sculpture to thank them.