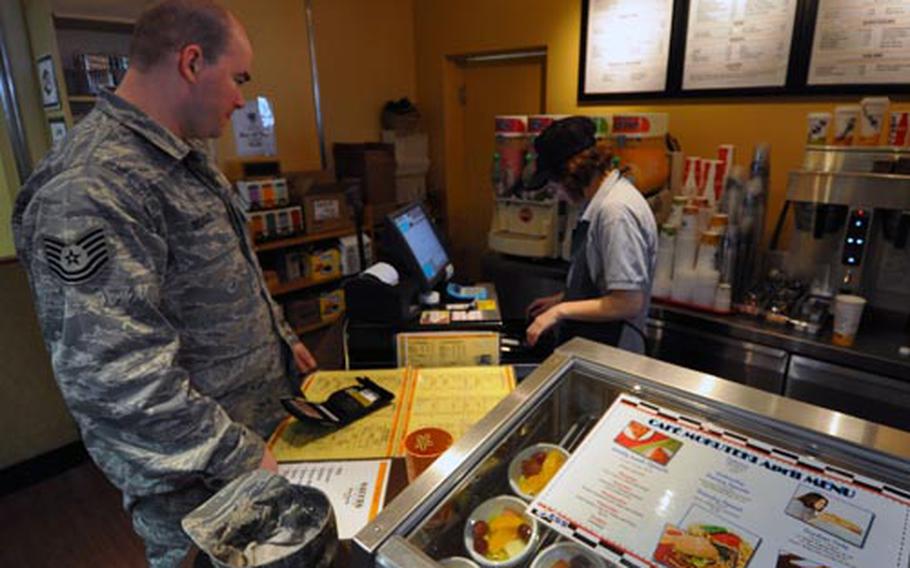 Tech. Sgt. Daniel Beasely orders a drink at the Mokuteki Cafe Friday at Misawa Air Base, Japan. He said a new initiative to offer and better promote healthful eating options on the base would be welcomed since they will “promote a healthier lifestyle.” (T.D. Flack/S&S)

MISAWA AIR BASE, Japan &#8212; A newly formed team of base personnel has tackled the goal of providing &#8212; and better promoting &#8212; healthful eating options at Misawa, where more than 45 percent of active-duty airmen are considered overweight by Air Force standards.

Misawa is the first base in the Pacific to put the program to work, but officials at Yokota Air Base, Japan, said Friday that they were looking into it.

While changes will benefit the entire community, they are crucial for active-duty troops who are wrestling with new Air Force fitness standards, Bradley and Hancock said.

According to data provided by Bradley, about 45 percent of active-duty airmen at Misawa are considered overweight and about 13 percent are categorized as obese.

"I&#8217;m actually excited because people understand that you have to work out to pass a PT test, but they&#8217;re still trying to comprehend the whole nutrition piece to it," Bradley said. "You need to change your eating habits."

The team is comprised of personnel from the fitness centers, dining facilities, commissary, schools and medical community. While the first official meeting won&#8217;t be held until later this month, some changes already have been put into place.

"We&#8217;ve already started offering some healthier versions of popular items at the club [and other eateries]," Hancock said.

While some are obvious &#8212; such as the choice of wheat instead of white bread, fresh instead of canned fruit packed in sugary juices &#8212; many substitutions likely will go unnoticed. One example was the recent change to lower-fat cheese in the clubs and snack bars.

But if there will be a noticeable difference in taste or the item &#8212; for example, the choice of substitute eggs in coming months &#8212; customers will be informed and allowed to decide.

In addition to the snack bars and restaurants, the team will be taking a look at squadron-level snack shops, which usually offer candy, chips and soda. Bradley stressed that people shouldn&#8217;t fear a sudden lack of things they like to eat, but simply the addition of healthful choices.

Both Bradley and Hancock said it should be pretty obvious whether the program is working based on sales data and, more importantly, the body mass indexes, waist measurements and physical fitness pass rates.